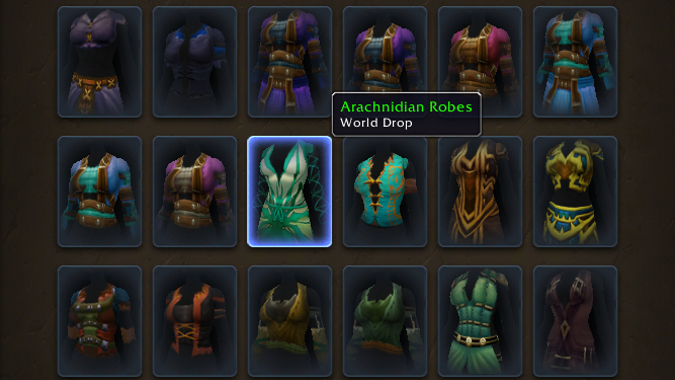 Did they put an option into the AH UI so you can filter for locked appearances?

No, they haven’t added that, but an item’s tooltip will tell you whether or not you’ve collected it. The Wardrobe collection itself also allows you to view items you haven’t collected — you can look through your collection, filter by Not Collected, see the super cool Musk Rose Robes, decide you want that item, and go get it from a vendor. Or you might find the Arachnidian Robes, see they’re a World Drop, then check the Auction House to see if there’s one for sale.

When you put a follower to work in one of your profession buildings, it says there is a “unique bonus”. I have a follower working in the mine, but I don’t see the follower anywhere. Does anyone know what the mining unique bonus is, and where does the follower go?

When it comes to the various profession hunts, your followers typically unlock unique crafting recipes — usually cosmetic, fluffy stuff. Jewelcrafting has the best one: a daily quest which rewards heaps of gold. However, all followers assigned to buildings increase the yield of work orders and that’s exactly what the Mining follower does. The Mining follower was supposed to unlock the mining carts which show up in the mine, but bugs caused the mining carts to show up regardless of whether or not you have someone assigned to the mine and the devs decided to just keep it that way. All a follower in your mine does is give you a higher ore yield from work orders.

Talking to your mining follower won’t do anything for you, but they’re usually patrolling down in the mine somewhere … or sometimes they wander off to go be lazy in your inn if you have one.

So most of my alts are double gathering since I didn’t want to bother leveling multiple crafts way back when leveling crafting was an absolute horror with old world mats. Does that mean they will have BoP mats with nothing to do with them unless I drop a gathering and level a craft?

Yes. I feel weird giving a one-word answer, but … yes. You’ll get Blood of Sargeras. You won’t have a use for them.

Does anybody else find the current Hearthstone meta really obnoxious? Taunt minions and control decks are extremely strong, so games take forever. And after getting three freeze mages in a row I have no interest in getting my quests done.

This depends on who you talk to. Rush/face/aggro decks — decks built around fast, early aggression — can still be quite dominant. It’s a style completely contrary to the long-game control decks, yet still does well. That’s how Hearthstone (and all card games) tend to be, though. There are a few deck types per expansion/adventure which are strong, using the strengths of a particular expansion. When the next thing releases, it shakes up the scene and the types of decks people are playing changes.

Become what you hate most. Seize those victories. When the next adventure comes around, try something different with the new cards.

Screw freeze mage, though. For real.

Question for Beta testers: What is the gold making like from leveling if you compare it to garrison missions?

Incomparable. The numbers are wildly different, but so is the method of acquisition. Maximizing your garrison gold gains involved getting fully-equipped followers with Treasure Hunting, probably at a short-term loss for a long-term gain, through a long-term max level activity. Leveling is … just leveling. You do quests. Is there gold? Sure. But it’s a totally different activity and it’s finite. You’ll get to max level and then leveling is over. Meanwhile, your garrison stuck around for two years. I’d guess you’ll get somewhere in the area of 10,000 gold from level 100 to level 110 if you’re maximizing your cash and minimizing your expenses. The gold is at endgame through World Quests and, depending on how the economy shakes out, the auction house.

Have we gotten any definitive word on what will happen to Salvage Crates/Bags when the pre-expansion patch hits? Should I wait until then to open my 1000+ crates, or will they just give 3c later?

The salvage crates you have now, or are acquiring right now, will remain the same. You can pop them open after the Legion pre-patch for your wardrobe and they’ll be no different than they are right now in Warlords. However, a different type of salvage crate will be implemented in the Legion pre-patch, and their rewards will be significantly reduced.

TL;DR: Crates you have right now will be fine. Any new crates will be trashpiles.

So the PTR for Legion pre-patch is available for anyone who wants to download it.  But as someone whose subscription is currently inactive due to a very busy real life schedule, I’m curious if I can actually download it or if it would even be worth it if I could.  My Launcher still lists the Draenor PTR as the only PTR option, but I would love to check out how the Legion changes have affected low level characters, such as those available to me via the Veteran account feature (max level 20).  Can I do that, or not?  PS, my internet is pretty slow so it would take a day or two to download – I’d rather not do that for nothing.  Thanks!

You can access the PTR without an active subscription, but I admit, I don’t know what your access will be like on a veteran account. I don’t know if the PTR takes that into consideration — and my account hasn’t lapsed in ages, so it would take me longer to create an account and test it than it would for you to do it yourself. That sounds snarky, I know, but that isn’t how I mean it. I say just go check it out.