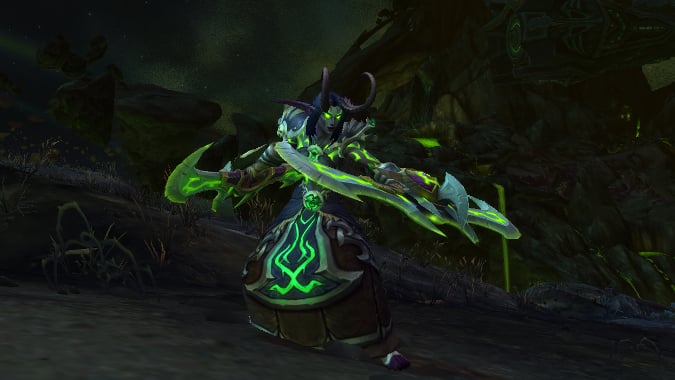 I’m excited for, and apprehensive about, the Demon Hunter I’m going to roll as soon as they’re available to play. I pre-ordered Legion just so I would get to play one, in fact. Ultimately that was the real draw of the pre-order, getting to finally roll my first Demon Hunter. I know it’s going to be a Night Elf, I’ve already half written his backstory in my head in preparation of the patch. I’m ludicrously excited.

I’m also a bit apprehensive about the class in general.

Every time a new tanking class has been introduced, they’ve been ‘the new hotness’ and they’ve always had abilities that made other, older tanks look plodding in comparison. Demon Hunters bring their juiced up gliding and a host of awesome abilities (fricking eye lasers, man, hard to argue with eye lasers) that really do make me feel like they’re going to hit the tanking scene and leave a huge crater for some other tanks to fall in.

I’m less personally concerned for the effect they’ll have on leather wearers, but it’s an issue — leather is now worn by Rogues, Druids, Monks and Demon Hunters. Cloth is worn by three (Mages, Warlocks and Priests), mail by two (Hunters and Shaman) and plate by three (Death Knights, Warriors and Paladins). Not only that, but Havoc Demon Hunters are again going to have that new class cachet, they’re going to be pushing hard on an already crowded melee DPS pack.

None of these keeps me from wanting to play one, mind you.

So how about you? Are you ready for Demon Hunters? Did you pre-order the expansion for early access? Will you be playing one the moment they’re available?

Blizzard Watch is made possible by people like you.
Please consider supporting our Patreon!
Filed Under: Demon Hunter Blues, Patch Day DH
Advertisement