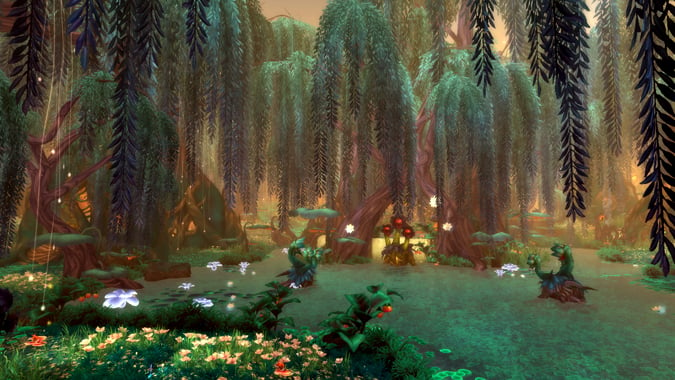 Say what you will about Warlords as an expansion, but man — it had some of the prettiest scenery I have ever seen in game. I’m going to miss the crazy mutant plant-infested forests the most, I think.

I thought I read somewhere that the wardrobe would make transmogs spec-specific, but respeccing into my second spec just left me with half-transmogged gear(some different pieces due to stat differences). Did I remember that wrong, or will I have to color-coordinate my transmog set with four different artifact weapons come Legion?

There is a tiny dropdown arrow next to the transmog gold cost that will allow you to choose whether to apply a transmog to just the spec you are in, or across all specs. It’s really easy to miss unless you know what the heck you’re looking for!

Been looking online for an answer to this question but have been unsuccessful as of yet.  Will the Tanaan Jungle reputations still be available in Legion? I am exalted with all but the Saberstalkers and really do not what to bother myself with finding a group to farm with.

Nope — none of the reputations from Draenor are going anywhere, to my knowledge. Draenor is its own little bubble away from the rest of the world, and will just kinda…stay put while we’re off doing our own things back home. No need to rush the rep farming, you can take your time!

Will New Dalaran have ALL THE PORTALS or will the Shrine still remain the place to set your HS to if you are into soloing old raids and stuff?

Currently on beta, there are portals to every major city and a portal to the Vale of Eternal Blossoms on top of that. So unless they decide to change that, you’ll be able to safely change your hearthstone to wherever you’d like.

Q4tQ: Will the WoW movie come to Netflix?

That depends entirely on Netflix — they’re the ones that buy licensing rights for films. If they decide Warcraft would be a good movie to pick up for streaming purposes, they’ll do it. But I doubt we’re going to see it on Netflix immediately, it usually takes some time before newly released films make their way onto the site.

Q4tQ: Will the Garrison Jukebox be making a return in the Legion Class Order Halls? I know many haven’t even touched it this expansion, but I thought it was a great little item that you either could utilise to make your garrison more interesting or just ignore it. I’ve finally gotten some of my favorite music and don’t want it to all be a waste in a month or so since I won’t be returning to Draenor anytime soon.

Nope, there won’t be a Jukebox in Class Halls — the halls are shared by many, many different players, it’s not a space you get to tailor for yourself or anything. However, if you complete the Azeroth’s Top Twenty Tunes achievement, you get a Portable Audiophone for your Toybox that will play random snippets of songs. It’s not really the same thing at all, but it’s the closest thing we’ve got.

Q4tQ: What purpose has Shok Narnes (an elderly orc NPC in Grommash Hold) ever served? Zor Lonetree was apparently involved in some old vanilla questlines, but Shok just stands there in the corner and doesn’t appear to have ever really done anything.

Oh, Shok! He was the Orc that you went to after you hit Exalted with the Timbermaw at one point. Gorn One Eye sent you off with a Timbermaw Offering of Peace to let your leaders know that you were very good at making friends. Fun fact: Originally, you turned the quest associated with the item in to either Thrall or Magni Bronzebeard, depending on your faction. When you turned it in, your faction leader would proceed to yell your praises to the entire city, just like turning in Onyxia or Nefarian’s head. They found your efforts very impressive!