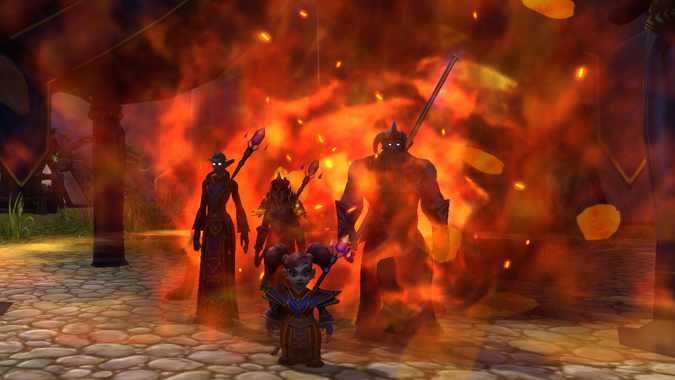 What’s a good thing to spend Apexis on if you already have the Corrupted Dreadwing? I have about 120k.

At this point in the game, I traded all of my apexis in for Baleful weapons, which I then vendored for gold. If you have the mounts/toys/whatever, Legion is only a few weeks away, so I see no point in trying to boost your ilevel at the last minute. You’ll replace everything pretty quickly.

Do you think Blizz will every add a feature where you would be able to play Hearthstone in WoW and gain player XP for every match you win, upto whatever the previous expansion’s level cap is (100 in this case, since we’re technically in Legion)?

Where would you LEAST like to spend a day in the World of Warcraft, if you were a character in the setting, and why?

Anywhere with swarms of small insects. Yes, small insects, not large insects. (Or arachnids.) I have an intense phobia of bugs, but once a bug reaches a certain size, it stops triggering my phobia. Large bugs stop being bugs and start being small animals. I’m typically not afraid of small animals. A small spider is far more terrifying than a giant fuzzy tarantula. Silithid wouldn’t scare me more than any other large monster/animal would scare me. (Which is admittedly quite a bit, because holy crap, monsters.) But a swarm of small bugs? Get me out. Out, out, out.

Legion question. Whats the quickest, easiest way to get a little bit of resources flowing (at level 102 or so)? I want to park my alts in the order hall, and level them slowly by doing the experience missions. You need maybe 100 resources per day to do this.

You acquire order hall resources by actual playing. They come from completing quests and other activities. You could do a few early quest chains on those characters to build up a small buffer, but there’s no passive flow to keep them stocked. Leveling a character simply by leaving them in your order hall is not feasible.

So… has the hunter pet AI gotten way stupid for anyone else? I’m soloing Firelands, and it’s like my pet only knows we’re attacking/being attacked about half the time. By the time it wakes the hell up, I’m almost half done. Heaven forbid I pull more than one of anything, because my pet is going to give up after the first mob goes down, return to my side and proceed to not do anything for another few moments. Guh, I don’t want to head to Tanaan, because I’m sure my pets will leave me somewhere to die.

I have no evidence, but my gut says yes, pets are way more dumb after the patch. I’ve always had difficulty managing demon AI on my warlock (not to mention difficulty keeping my imp alive), but now it feels like if I’m not giving my imp my full attention, he’s going to go take a nap rather than help me in combat.

Apologies for how short today’s Queue turned out to be, but there you go. Leave us some good questions this week and I’ll try to make Wednesday’s Queue nice and juicy.