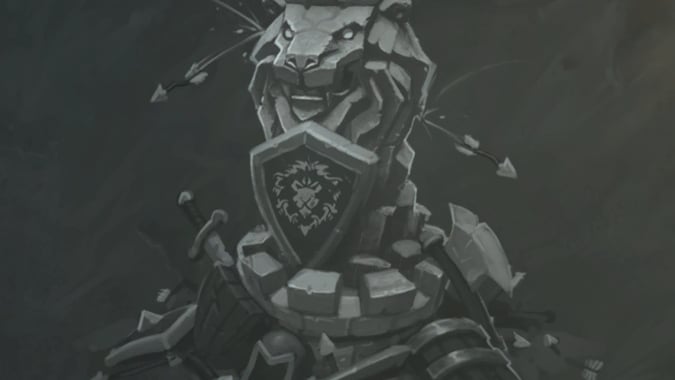 Storming Stormwind, this week’s Hearthstone Tavern Brawl, is a little different than the usual brawl: it’s entirely PVE. There’s no clash between players here, it’s just you facing down the entirety of Stormwind. In this brawl, Stormwind City’s attack power increases each turn, and the minions Stormwind plays scale with the city’s attack power. The goal is to do as much damage as you can to the city before its defenders put a stop to your siege. There is no defeating the city; as you deal damage, Stormwind’s health ticks up as a sort of scoreboard.

This is the first survival challenge in Hearthstone, where the goal is not to defeat your opponent but rather live as long as possible. It’s an interesting challenge and I’m very curious to see what sort of decks people create. The longer a match goes on, the more difficult it is to survive. When Stormwind is throwing 15/15 (or higher) soldiers at you, the gameboard becomes terrifying. It is fun, and personally, I’d love to see something like this become an actual game mode with leaderboards. Seeing how far players get and how they did it would be fascinating — as well as comparing how players fare after the release of new adventures or expansions.

Storming Stormwind is an excellent time to complete your quests, by the way. No matter what happens in a match, it’s considered a victory. As a test, I took a Rogue deck into the Brawl and didn’t attack Stormwind even once. No damage done — no cards played. When Stormwind City finally took me down, it still counted as a victory. When you’re defeated, your hero goes immune and Stormwind City explodes instead, unveiling a statistics screen to tell you how well you did. No matter how poorly you do, Stormwind blows up, thus you win.

Blizzard Watch is made possible by people like you.
Please consider supporting our Patreon!
Filed Under: Storming Stormwind, Tavern Brawl
Advertisement