The Queue: What is even happening here 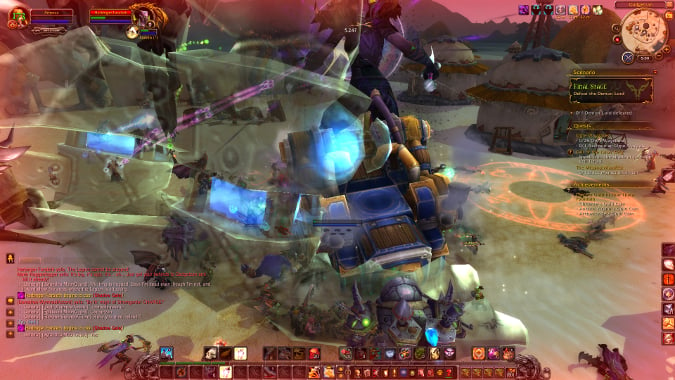 It’s been a long couple of weeks. I’m exhausted. Coffee is my lifeblood right now. As such, I apologize if today is a bit brief. In other news, I feel the image at the top of this post — a screenshot I took during an invasion yesterday — sums up what it’s like to play as melee in World of Warcraft. Where’s my character? I don’t know. What’s killing me? I don’t know. Why are there giant ghost dinosaurs in front of my camera? I don’t know. Why can people bring actual siege tanks to these boss fights, obscuring anything and everything in melee range? I just don’t know. … and let’s just not talk about my action bars right now, okay? Legion made a mess I’ve yet to clean up.

Btw, I think Brood Queen Tyranna looks more like a “bat demon” than a “spider demon.”

Methinks Jace needs to work on his spectral sight a bit more.

Neither of these are questions, but I’m a rebel and I don’t care. I agree with you on Tyranna. I don’t see anything spidery about her and have been confused about that since I first played the Demon Hunter quests back at BlizzCon. She seems to resemble the new felbats moreso than any spiders, and because of that, the thought of her beloved being an actual spider is horrifying. (In case any of you missed it, there’s an optional silver-framed spider in the Demon Hunter quests who is her husband.)

In fact, back at BlizzCon, Anne and I were sitting next to each other while we played the BlizzCon demo. I have a distinct memory of asking Anne how the hell Tyranna is supposed to be spider-like at all. I guess her “wings” look kind of like spider legs if you squint really hard, but … they’re wings. She doesn’t do anything spider-like at all.

As for Jace, he looks like a clown. An actual clown. I can’t take him seriously. I want to honk his nose and spray him with seltzer.

I’m a tank now .. by mistake, Vengeance sounds like DPS spec, Havoc is tanking or that’s what my mind thought, i can not switch to Havoc, so i kept going as a tank, not bad, i liked the role but i’m not sure if i’ll be good enough for dungeons .. so back to DPS.

Also not a question and I don’t care! I’ve had this exact same problem with Demon Hunters all throughout beta and still had to stop and read closely to make sure I was choosing the right spec. Havoc makes me think making a big mess out of things — wading in and messing stuff up, like a DPS player might do. Vengeance makes me think you’ve taken some hits, so you’re going to dish out some pain in turn — like a tank.

The names of the specs are words I associate with the opposite of what the specs actually are and I picked the wrong spec more than once on beta. Like I said, I almost did it again, but I had to stop and read to remember which was which despite doing the Demon Hunter quests countless times already.

I tried to take my DH to Onyxia and got a message about Demon hinters not being allowed to do legacy raid content. HUH?! Did I miss something important? Transmog temper tantrum coming in 3…2…1…

It’s a time-based restriction, not a permanent restriction. Wait a day and you’ll be able to run those things. I don’t know exactly why Demon Hunters (and possibly other boosted characters) are barred from running Legacy content immediately after their creation, but it’s possibly what was suggested in the comments yesterday — they don’t want you creating max-level characters just for the purpose of farming gold from these raids. I don’t know why you would, but I suppose you could theoretically make a Demon Hunter, run every possible Legacy raid for the gold, transfer the gold to your main, delete the Demon Hunter, make a new one without any raid lockouts, and do it all over again.

Happy to see black hair option for DH, at last night elf with black hair … i’m the only one here happy about this?!

I chose the onyx skintone and the black hair and regret everything. Why? Because all of the leather I have which shows sufficient skin to show off those awesome tattoos is dark brown. Dark brown leather against onyx skin has resulted in my character looking like a muddy mess. I have half a mind to recreate the character with brighter skin and hair just so armor doesn’t look awful.

Though if anyone has any transmog suggestions, I’d much rather do that instead. I’d really, really like to show off those tattoos. Why isn’t Kor’vas’s top from the Harbingers short a thing in-game!?

What kind of professions are you taking for your Demon Hunters? I feel like leatherworking/skinning would probably be the right thing to do, but I’m thinking about engineering just because I can’t stand looting by hand. I dunno. I guess it’s not too terrible for melee.

I’m going Herbalism/Alchemy. World of Warcraft doesn’t necessarily have a history of Demon Hunters quaffing strange concoctions before battle, but it’s a staple in other franchises with that sort of character. Take The Witcher, for example. You always take a moment to prepare yourself before a hunt: Oil your weapon, ready your grenades, down your potions and elixirs, and only then pick a fight. I like that thought. You’re a Demon Hunter. A hunter! You’re the predator. If you prepare yourself before the hunt, victory is inevitable.

Again, even though WoW doesn’t really have this aspect to its Demon Hunters, I can’t imagine that sort of character without considering the tools of the trade.

Is anyone making a Taco Bell run?  I’ll pay double if someone brings me back a nacho bell grande.

I haven’t been able to get to a grocery store for almost two weeks now. Supplies running low. If someone’s making a Taco Bell run, count me in. They don’t deliver yet in my area and that makes me so, so sad.

why is there a hottub/pool near the top of the vault of the wardens that is sparkling suspiciously like the well of eternity?!?!?

Have you seen the armor the Wardens wear? It’s insane! If you wore that stuff around all day, you’d probably want to jump into a hot tub when you get a chance to take it off.

Are the resources gained from the invasion events account wide? Or do I have to focus the events on one character? I want to level some additional alts but don’t want to miss out on the event rewards!

Nethershards are per-character. However, the Ensembles you purchase unlock account-wide, the pet goes into your pet collection, and so forth. You don’t need to buy all of the items on one character. You could buy one item on a bunch of characters and still unlock everything for all of them in the end.