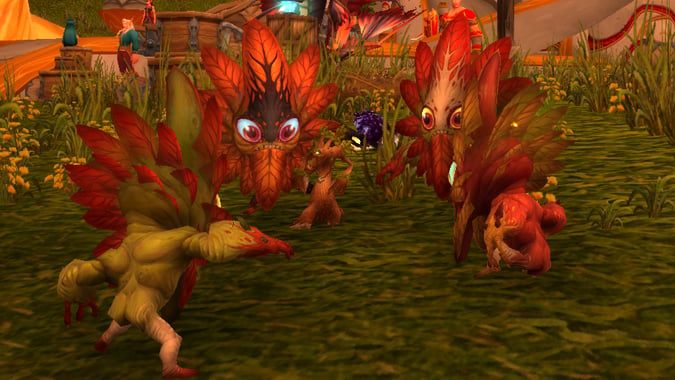 I imagine the podlings of Draenor would really enjoy Azeroth. I mean, it doesn’t exactly suffer from a lack of plant life, and since none of Azeroth’s ancients or saplings are trying to consume each other, they wouldn’t really have much in the way of competition.

QftQ: For those of you who played Warlock in Legion beta, do we see Kanrethad Ebonlocke again? This would be the perfect time to bring him back. Prisoner in our order hall, in the ranks of the Legion, anything?

Not a peep — he was banished in the Warlock quests, and it appears he’ll remain that way. I don’t necessarily think he’d be worth bringing back, solely because he was involved in a Warlock-only quest chain, so other players wouldn’t necessarily get the context of why he’s so villainous. But then you have Wrathion, who was originally part of the Rogue legendary chain and got acquainted with everyone during Mists, so who knows? Currently though, there’s no sign of Kanrethad anywhere.

I have 10 alts ranging from 31 to 72.  Is it better to level my 72 through invasions so I can get to other toons sooner, or my 31 so I can get my overall average character level higher?

I’d say level the class you’re most likely to play first — focus on which ones are fun to you, and then worry about the others. If that level 72 isn’t as entertaining as the 31, level the 31. Or vice versa. Having a level 100 alt is kind of useless if you aren’t really having fun playing it, you know?

Q4tq: is there going to be a port to wherever Da gets teleported to or do I need to log everyone out in Dal? I was planning to just leave them in SW and fly but if Dal is indeed getting ported somewhere, I may need to rethink.

There should be a portal available — even on stage two of the chain, the portal is still up over in Stormwind and Orgrimmar, so they aren’t suddenly going to shut that thing down when the expansion goes live. If you’re in Stormwind, the portal is over in Stormwind Keep, in one of the side rooms on the way to the throne — the one where you shut down a Legion portal during the quests just after the Broken Shore scenario.

Q4TQ: Whats the story behind Moroes? Why won’t he ever die?

Karazhan is a magical place. Moroes may be bound to the tower just as Medivh’s spirit is said to be — he can’t leave, he can’t die, he lives to serve forever.  What we do know is that Moroes was one of a couple of servants in Karazhan at the time Khadgar became Medivh’s apprentice — there was Moroes, and there was Cook, and there didn’t appear to be anyone else. Moroes is well aware of the tricky magical nature of Karazhan, and offered blinders to Khadgar upon his arrival — to block out the disturbing visions people sometimes saw while wandering the tower.

He’s very practical, that Moroes. I’m kind of excited to see him again. Given the teaser for patch 7.1’s Karazhan, maybe we’ll see more about Moroes’ story at that point.

Q4tQ: How invested in Sargeras’ cause of complete universal destruction do you think the Eredar actually are? If Sargeras keeled over from the Fel energies consuming his body (or eating a bad porkchop) and suddenly Archimonde and Kil’jaeden were top dog would they continue to send the Legion to destroy worlds?

Fun story — there was every implication that Kil’jaeden and Archimonde were working on their own in the Third War and afterward. They’re dead set on destroying Azeroth. The entire Legion is dead set on it. They may be more concerned with ruling over the universe after the Legion triumphs, rather than utterly unmaking the whole of creation, but they’re still completely down with conquering, subjugating, and destroying worlds without Sargeras around.

What is the Stormheim scenario without spoilers? Something you are put in as soon as you arrive that you have to complete before you start questing?

It’s a scenario that plays out when you arrive. It’s fairly short, and honestly it’s more like a series of quests that just happened to be phased in a scenario instead of placed out in the open world. Don’t worry, it’s nowhere near the length of Tanaan — it really doesn’t take that long to run through at all.

Really, it feels like the reason it’s a scenario is because there’s an environment change at the end of it, one that kicks off the zone’s main storyline. It’s an introduction kind of thing — not bothersome in the least.