The Queue: But I’m alive 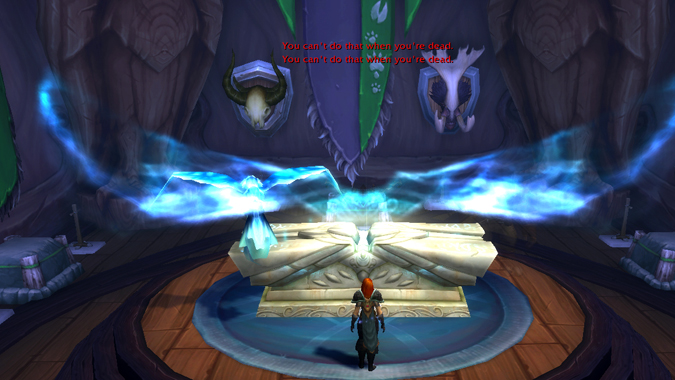 The good news: Hattie the Hunter finally tracked down Titanstrike and has her second Artifact weapon. The not-so-good news: It’s probably a good thing that she has a second spec, because trying to add any points to her bow results in…nothing. I click on it, it phases me out. Relogging doesn’t fix it. Turning off addons doesn’t fix it. Uh…I guess this means no more bow for Miss Hattie? At least she’s got a lightning wolf I guess.

Q4Q: Guys I really need your help with this one, it’s been driving me crazy! I remember way back in classic there was a quest early on as a night elf where you find a Satyr that is trapped somewhere and you need his help to beat some demons or something. Not Zenn the guy that tricks you and you later kill. I remember he was like in a tower or under a tree or something and he is able to get free at the end and it’s real bad. The reason I’m asking this is because I remember that being Xavius and that was how I learned Xavius is the first satyr. I may have things jumbled up and I scoured wowhead and google for an answer but couldn’t find anything. I’m assuming it’s gone with the cata revamp but I know that if there’s anywhere I can get an answer it’s from you fine folks.

You’re thinking of Tyrus Blackhorn up in Hyjal, I think — that definitely wasn’t Xavius. Legion is his first in-game appearance.

Q4TQ : We don’t know who will be leading the Darkspear Trolls yet (I think) but do we even know any other named trolls? Like someone relatively important from the Darkspear tribe, not just some random quest giver. I’m drawing a blank and it’s kinda sad when you realize there are more famous gnomes in the game than trolls.

Let’s see, there’s Shadow Hunter Rokhan — he was the Troll that went with Rexxar on his journey back in Warcraft 3. In WoW, Master Gadrin was always pretty important — he kind of called the shots in Sen’jin Village back when Vol’jin was serving as Thrall’s advisor. And there’s Zen’tabra, of course, but she was a recent addition back in Cataclysm — one of the first Troll Druids, she was part of a group of witch doctors that ignored Vol’jin’s original order to retreat from the Echo Isles. Of that group, I think Rokhan is most likely, but we don’t know who will step up and lead just yet.

Q4TQ: Ok, stupid question maybe. What’s the difference between a Combat Ally and a Bodyguard? DPS vs tank? I haven’t actually used either yet, since leveling as a holy pally is pretty OP, but just wondering…

Not a stupid question at all! A Bodyguard is a persistent companion that follows you around while you’re out in the world questing. A Combat Ally is someone you have to push a button to call on — they show up, perform whatever special ability they do, and disappear again after it’s over. The button has a cooldown — it works like the various zone abilities you got while questing in Draenor.

Q4tQ:  Blizzard artist oversight or something else going on that I missed?

I went to Black Temple on my Demon Hunter last night (because, you know…), and actually took a moment to look in the sky while up by Illidan (something I’m not sure I’ve ever done in Black Temple).  Things then went something like this: “Oh look, that moon is huge!  Wait… there are landmasses and oceans on that moon, so maybe it’s not a moon.  What’s this?  I maelstrom in the middle of those surrounding land masses?  Looks an awful lot like Azeroth!  … I could be mistaken, but I’m fairly certain Azeroth and Draenor/Outland aren’t in visual range of one another, at least to a degree in which they appear as moons.”

Do all classes have a Class Hall campaign quest to go into a dungeon?  Warlocks at 110 are required to enter Black Rook Hold, to rescue one of the Black Harvest warlocks.  It seems kind of like a punishment to me.  Unless lots of healer classes and tank classes are also being sent into Black Rook Hold at 110 as well.

Yep, you have to do at least one, if not more. My Druid alt has to visit four dungeons as part of her Class Hall campaign — it’s not my favorite thing in the world to do, but I can knock them out on normal over the weekend and be done with it. Luckily, there are tons of other things to do while waiting for the dungeon queue to pop!

Why is Nathanos Blightcaller all sexy and not particularly dead looking anymore? Is this something that’s explained in a bit of lore I haven’t seen (such as the Horde 100-110 experience, or a dungeon somewhere) or did they just randomly decide to update his model with no explanation?

In any case, phwoarrrr. I think I might spend a lot more time playing Horde now.

He got a model update is all — he’s taking a much larger role this expansion, so it’s kind of understandable that they’d want to update him from default Forsaken model #5 or whatever it was he used to be kicking around with. I mean, he’s still dead, you know. Undead. Rotting and all that.