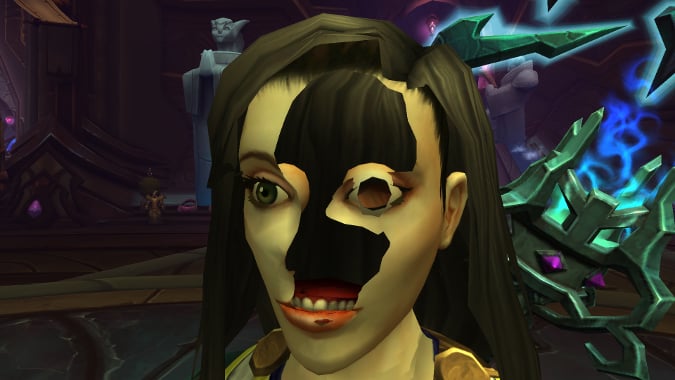 Why is nobody talking about the pet-able Corgi located in the Bradenbrook inn in Val’Sharah?  You can right-click it, and your character kneels down to pet the Dog.  Blizzard needs to pause all work on other projects, and implement this feature across all non-combat pets immediately.

It’s not just the corgi! I haven’t kept an eye out of critters you can pet in every zone, but at least in Val’sharah, there are numerous pettable pets. There’s at least the puppy and a cat in Bradensbrook and probably more, as well as a fawn and others in Lorlathil. Usually, if you find a critter in someone’s home, you can pet it.

Who sells the extra-roll tokens for raid loot?

Archmage Lan’dalock outside Violet Hold. If you played Wrath of the Lich King, he was the guy who gave you the random boss quests back in the day. He’s your man for Seals of Broken Fate and he’s not too happy about it.

Any Patreon members out there get the unedited podcast yet?

I’m writing the answer to this question at 11:50 p.m. central time, meaning roughly 11 hours have passed between me writing it and you reading it. The unedited podcast might be available right now! It might not be. Ditto the Behind-the-Scenes Editors Podcast. If it isn’t, it will be soon. Anne typically handles podcasty things for us and she’s on vacation, so the person who has the various processes nailed down is out and the rest of us aren’t quite so speedy on it. Also, I’m sick as a dog, so I’m being extra slow.

I apologize for not having these up, but it’s been a very special sort of week.

Why did Blizzard think giving the Emissary bags 810-820 gear would make sense when you get 830-840 from the actual World Quests?

That’s just the baseline for that gear, and I agree, it sucks if the baseline is what you’d get. It feels like something which requires you to do multiple, specific world quests would offer a better ilevel. Those items can be warforged or titanforged, though, which helps. And remember: These gear items were hotfixed into emissary chests a few days after people started hitting level 110. Initially, it was totally possible to get a loot box which contained no items whatsoever, just gold. That was even more demoralizing.

Remind me – how does herbalism work in Legion? Can I pick Broken Isles herbs with skill 1+? Do I get the “useless” fragments from herbs or complete flowers?

You can start picking Legion herbs at skill level 1, yes. There are no fragments you need to combine at a low level, you just get minimal herbs from the node because of Legion’s own built-in scaling: Everyone starts with one star out of three in their gathering skill for each node. You aren’t as efficient as you can be until you have three stars, so there’s no need for the bag-clogging petals and leaves.

How are you handling world quests? Are you clearing the map everyday? Do you wait for a few days until more build up? Do you just do enough for the emissary quests?

How are you tackling these things?

At first, I was knocking out absolutely everything every single day other than PVP quests. Yes, it took a lot of time … but actually not as much as I expected it would. Now, I’m more picky about it. I take care of my emissary for sure, but have started to skip Order Resource quests simply because I have far, far too many of the things and not nearly enough to spend them on. I also skip quests I know are irritating unless they’re offering me a seriously awesome reward.

Waiting “a few days” for World Quests to build up isn’t a good idea unless you’re specifically talking about emissaries. While a new set of World Quests spawns roughly every 4 hours, most solo world quests have a 24-hour duration. That doesn’t mean you need to do every single world quest, but if you’re skipping them expecting to have more in 72 hours as compared to 24 hours … that’s not the case.

Anyone else not excited for LFR?  Just from doing WQs I’m already sitting at 840, and LFR drops have a base iLvl of 835.  I know you have the possibility of war/titanforged drops, but it’ll feel like a disappointment to get drops that are just going to be vendored.  Don’t really have the schedule flexibility to get into a normal raiding group.

Personally, I don’t really care about the gear from LFR. Some new transmog stuff would be cool, but the item level, eh. I, too, can’t dedicate my time to a dedicated raid group, but I still want to see what the bosses are like and how it looks in there. LFR still lets me see those bosses and that’s what I’m getting out of it. So yeah, I’m still excited, even if the gear is dreadful.

There was a side quest in Suramar City that, upon completion, immediately made me regret completing it. Not to get spoilerly but it involves a certain fruit/food vendor wanting us to sabotage his rival. And the WQ where we have to kill Faldorei in the Falanaar tunnels, and the “quest giver” says not to feel guilty because they are a mistake that must be eradicated. Anyone else complete any quests that made you feel guilty in Legion?

I don’t want to call out any specific quests because I want people to get there on their own, but there are other quests like this and I love them. Suramar is chaos. It’s a bad, bad situation. Sometimes, you don’t know who’s friend or foe until it’s too late. And sometimes your closest allies are cold, cold individuals, because that’s what it takes to survive the situation they’re in.

That druid in particular is a complete dick, though. And that’s what makes him special. How many other druid characters have we had like him? None, that I can recall. They’re all total fluffy hippies other than Fandral Staghelm. I love Fandral, too, but he was a different flavor of jerk than this new guy. They’re both great.