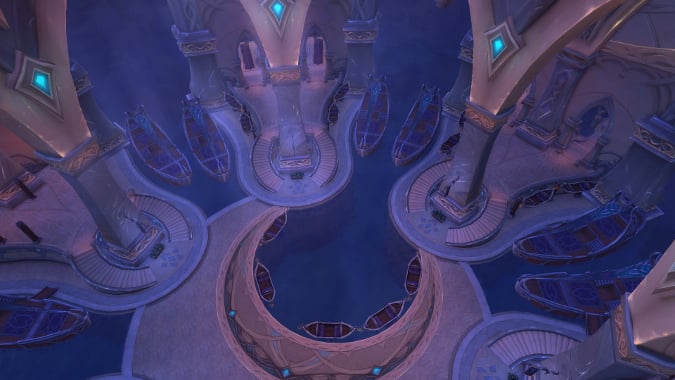 Having had to venture out into the middle of nowhere again to meet my “emissary”, I’d love to know what kind of emissary doesn’t bother coming to you to deliver their message. I mean, I’m sure there’s somewhere in Dalaran they could come to meet with the great heroes pulling their butts out of the fire on a daily basis.

I’m pretty sure this is entirely a game mechanics thing. When the feature was first announced, the developers described — and even had mockups of — the emissaries visiting your class hall to give you their quest. Now, there’s little to no connection to your class hall. I’m confident this was a player psychology change: You don’t go back to your class hall when you’re done with the quest. Instead, you go to someone out in the world. If you went back to your class hall, that might make the player decide they’re done for the day. They’ve done the required objectives, so they can retire until the next emissary. If you’re out in the world a few steps away from a flight path, you might check your map and find something else to do. Chances are much higher you will keep playing.

Is there a reason why bodyguards this expansion feel so…crap? I mean this time we’re sacrificing 1/6th of our champions rather than 1/25th so if anything they should feel 4 times stronger!

I got Broll BEARmantle as a bodyguard on my druid yesterday expecting to finally have a tank for solo stuff but he can’t hold aggro on a single mob! He just runs about smacking things in humanoid form wearing bear paw gloves, Defender Illona could tank packs of mobs as long as I threw in some heals! The shaman ones are barely noticeable and the priest blob is only good for the occasional heal. :(

I think they wanted Combat Allies to be more situationally good than good in a way which totally changes your solo playstyle. With how much emphasis there is on World Quests in this expansion, it might be a bit bizarre if every DPS player had a pocket tank, or every tank had a pocket healer, or every healer had a DPS bodyguard. Instead, just about all bodyguards are just additional DPS or some minor heals — nice to have, but it won’t alter how you play the game.

Some Combat Allies have more powerful effects, but they have a cooldown rather than something you have all of the time. Warriors have Finna Bjornsdottir, for example, who is a tank with an AOE taunt… but she only appears when you’ve pulled more than one at a time, and I believe she has a hidden 2-minute cooldown. You don’t push a button to make her appear, she’ll just do it — and when she does, having a tank AOE taunt everything for you is meaningful. My Priest uses High Priestess Ishanah as her combat ally. I’d rather the DPS from Zabra Hexx, but he’s way too useful on the missions I’ve been getting. Ishanah providing a 5-minute cooldown “oh crap” button isn’t quite so useful… but still nice for getting me out of a bind.

If I’m being honest, I preferred the bodyguards in Warlords of Draenor because they seemed like they had more personality (and were more useful) than the people I’m getting in Legion, but I see what the devs were going for: Choosing from a selection of kinda-nice-but-not-necessary options and avoiding a complete alteration of your class’s playstyle.

The hidden messages and puzzles for Overwatch make for great hype, but they seem sort of mean to me. They look difficult and time consuming yet never really lead to any true information or images. Do the people who work to solve these things realize that and just do it for fun or is it just a really mean way to advertise?

I can’t tell if the Sombra ARG (Alternate Reality Game) situation was the Blizzard developers letting their own hype run away with them or if they just don’t know what an ARG is supposed to be. It’s entirely possible Blizzard thought it would be fun to have some goofy little secrets in the background for Sombra, and were going to leave it at that… but they clearly enjoyed players trying to dig up those secrets, so they seeded more of them, which meant players expected a way to “win” the mystery, and… yeah.

If they were genuinely going for an ARG, Blizzard forgot the most important part: The ability to solve it. People love a mystery. Participants in a mystery want to solve it. Every step of the way in this Sombra ARG, players thought they were going to find another step, but nothing was particularly well woven together. And in the end, participants ended up finding a horrifically slow countdown timer which signaled loud and clear their efforts were for naught.

The best ARGs are difficult, but not so difficult players can’t figure them out — and once they have solved the puzzle, there should be a reward. Blizzard could have done many things with this: Trickling out fragments of artwork, little stories, background for the character, letting players learn about the hacker while following the hacker’s digital fingerprints. Instead, there was nothing.

Personally, I didn’t invest much time into the ARG, but those who did are indeed irritated with how it all played out. Other game companies have put on some pretty darn good ARG events to hype new releases, so I think pretty much everyone expected better of Blizzard in this case. They derailed their own hype train, and if Sombra still gets a big pop when she releases, it’ll purely be because people still love Overwatch itself. The leak didn’t derail the hype — the lack of movement in the ARG did it long before the leak.

Is it just me, or is Suramar the first in-game city that actually feels lived in? It actually feels like a bustling metropolis where people do things other than stand around and perform NPC functions. It’s really made the Suramar quests feel more involved to me, it actually feels like I’m infiltrating a city when I use the masquerade ability, and the various undercover quests you have to do actually feel suspenseful.

I feel exactly the same way about Suramar. It feels alive in ways other cities don’t, and just by looking around the city, you can tell Blizzard invested some thought into how to pull it off. The Nightborne models are low-res compared to everything else in the game, allowing them to really pack the city full of citizenry without destroying players’ PCs. If you packed an equal number of the new, higher res human character models into Stormwind, low end PCs will probably burn to a crisp, but they’ll be fine in Suramar City.

Suramar City has so many things a city would have, and those things are actually being used. People are picnicking in the park rather than just having a vague, empty area called “park.” There are indoor shops, outdoor shops, a market row, wide streets and narrow alleys, a promenade and countless businesses. My favorite detail is the harbor — the area where you light ships aflame. It reminds me of the covered marina of ancient Carthage; a circular construction which was a hybrid of indoors and outdoors, though Suramar’s is much scaled down. Ports, harbors, or marinas are almost always depicted as just docks along the shore, but much more thought was placed into how it would work in Suramar, and there are real historical examples of how it would function.

I love the detail they put into the place, and if I have one complaint, it’s I don’t think they utilized the rooftops quite as much as they could have. There are grapple points throughout the city, but they’re difficult to spot. And while they have that playable space up there — there are pathways and most of the rooftops are flat — there’s not much to do up there. There’s a rare spawn or two, and if you can find the rare grapple point you can potentially work out some shortcuts, but there’s totally potential for more.