The Queue: Ranting about Illidan 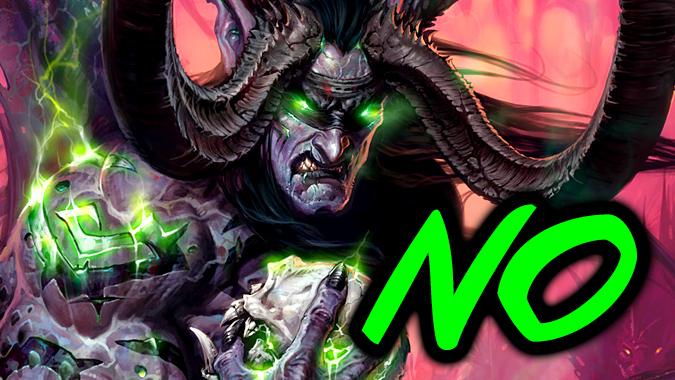 Do you miss buffs?

Only as a simple way to thank people/be kind to people I run into while questing. Someone jumps in to help me with some mobs? Buff ’em. I see someone who might be having some trouble with a quest? Help kill their mob, then slap a buff on ’em before I part ways. It was a little gesture of kindness I both loved passing out and receving. As for its actual gameplay purposes, buffing up before a dungeon/raid/whatever, I don’t really miss them, no.

TIL the Warrior order hall missions for the final part of the OH campaign actually require Hymdall to run, so, i have delayed myself by 6.5hrs as a result of sending him on another mission in order to get the final mission to spawn. Stupid system…

Unfortunately, yes. They don’t warn you about this at all and I had a situation where not only did I not have Hymdall active (because he seemed lame), but I hadn’t leveled him. If I remember right, the mission you need him for is a level 108 or thereabouts, but you get Hymdall at 105 or 106. Or, you did at Legion’s launch. So not only did I immediately deactivate him only to find out I had to reactivate him later, I needed to deactivate a follower I actually wanted so I could level Hymdall up before progressing.

On an alt, I don’t find that kind of thing too distressing. On my first character of Legion, it delayed my progress by a couple days — as did the initial launch problems of the warrior class hall missions being significantly longer than that of every other class. The length problem has since been resolved, but they seriously should warn people about the Hymdall thing or get rid of that requirement.

So we are all in agreement at Xe’ra is an agent of the Burning Legion right? The Naruu were all gung ho about taking down Illidan in BC since he pretty much became a crazy dictator (even if his goals were “noble”) but Xe’ra is pretty much calling US the villain for taking him down. Then she knocks us unconscious for three days and according to the text quest causes us extreme pain (she assures us it will subside soon) and “marks” us without our permission. None of that sounds anything like what a Naruu would do or be.

Well, no, I don’t agree she’s an agent of the Burning Legion. But I do agree she doesn’t make much sense as a naaru, which could mean she’s an agent of the Burning Legion or it could mean she’s been written in a way that doesn’t make sense. I think it’s less Xe’ra’s fault and more the story Blizzard decided to tell for Illidan’s resurrection: Everyone loves him, he’s the best thing ever, killing him was the wrong thing to do, he’s the Chosen One and the Savior.

Here’s the Illidan I know prior to Legion: Everyone hated him. He was a selfish (excuse my language) prick. He’d go on and on about doing it for the greater good, but ultimately he was on an endless power trip looking for his next fix. That was always his characterization. He was powerful enough and charismatic enough to court temporary allies like Vashj, Kael’thas, and Akama, but eventually everyone realized he was just in it for himself and he used people like pawns.

Turning around and trying to make him out to be a hero, with Xe’ra going on and on about how wonderful he was while he was enslaving an entire planet, is nonsense. And it’s not just Xe’ra. When the Illidari talk about him, they don’t talk about him in terms of him being competent or capable or who is needed right now. They talk about him as if he’s absolutely brilliant and they hang posters of him over their bed. Illysanna in Black Rook Hold littered the dungeon with journals about how she thought he was a big dumb jerk until she came around and realized he’s so amazing and dreamy.

When it comes to Illidan specifically, Legion is one step away from being someone’s smutty fanfiction. This expansion wants to rip Illidan’s clothes off and make out with him. And it’s weird, man.

I don’t really understand why the story had to go in that direction. I don’t understand why it needs to chastise the player for killing Illidan when the freaking naaru told us to do it in the first place because he was super dangerous. And even when you consider how messed up and dangerous a dude he was, a resurrection story can still make sense without the savior stuff. Azeroth has been through so many crises, I think we’d have formed a grim practicality about things like this by now. We hate Illidan. He’s a terrible person. But he’s really freaking good at killing demons and we need that kind of firepower right now. Illidan isn’t our boyfriend. He’s a weapon.

Essentially, Legion could’ve justified Tyrande’s actions in Warcraft III. Why did she free such a colossal jerk from prison? Because the situation called for it. She didn’t need a dreamboat chosen one. She needed a weapon.