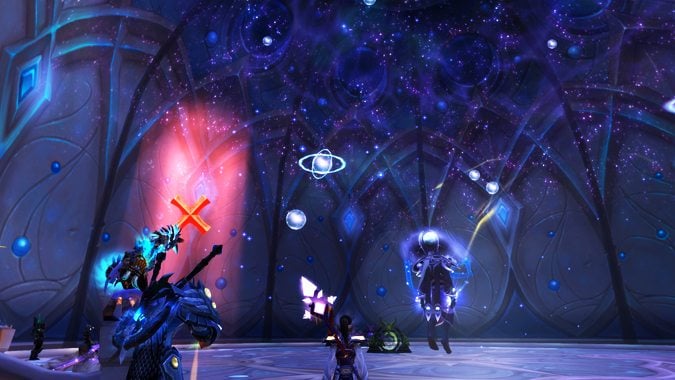 Nighthold is just beautiful. If you haven’t had a chance to go in, do. It feels very similar to Suramar: a living, thriving city. Bosses are tucked away in alcoves or side rooms at the top of staircases and it feels very immersive. The fights are challenging and interesting as well. I can’t say there’s a single boss I dislike in the instance. Nighthold is broken up into four wings in Looking For Raid, three wings of three bosses each with Gul’dan alone in the fourth wing.

As for healing, you’ll definitely notice a ramp up in difficulty as you make your way out of the aqueducts and further into the city. On some fights the raid damage bursts may be hard to predict, depending on mechanics or RNG. This is great for Holy, who can reactively pop a Divine Hymn or Sanctify, but not great for Discipline who needs to meticulously plan out damage phases. Discipline will likely need to work harder to stay on top of things.

This boss is relatively simple as far as fights go. Skorpyron has three main abilities you’ll want to pay attention to. First, he puts Arcanoslash on the tanks, which can cause heavy single target damage with Arcane Tethers. Second, he’ll periodically aim at the raid with Focused Blast, shooting out a wide column of purple sparklies, damaging and stunning anyone unfortunate enough to not get out of the way in time. And third, he’ll cast Shockwave, wherein your raid will hide behind the Crystalline Shards. This gives you a Broken Shard debuff if you’re safe. If you don’t get out of line of sight in time, he sends you flying into the wall which will pull more little scorpion adds.

The tanks will be moving him around the outside circle, and your DPS will be killing him as well as the little scorpions that periodically come in. The tanks can be taking heavy hits from Arcanoslash so you’ll want to keep an eye on their tether stacks and health in particular. When Skorpyron does Focused Blast, you’ll need to top off anyone who didn’t get out of the way in time. Save your cooldowns for after Shockwave or if a lot of adds get pulled by the knockback.

Chronomatic Anomaly has a unique ability called Passage of Time, which will speed up or slow time as you go in the fight. The time changes can get frustrating for those of us who like Haste, but it’s a fun little fight with flavor. The main things you’ll want to be concerned with are dodging avoidable damage and pulsing AOE. Orange orbs will fall on the ground and blue circles come out in two waves, which are pretty easy to avoid. Run out of the raid if you get Time Bomb and it’s close to expiring. A Time Release absorb debuff will go out on raid members that must be healed through or it’ll explode on the raid. There’s not too much damage during this until the tanks position the boss for Power Overwhelming.

Use your cooldowns when everyone’s stacked for Power Overwhelming. It’ll keep ticking as long as your group lets it, and if your group can handle it then it’s amazing for Holy Priests. This is where our AOE really gets to shine, with alternating Prayer of Healing, Holy Word: Sanctify, and weaving in Prayer of Mending casts that leave Renews. Our Mastery Echo of Light ticks are a little glorious. Time your Divine Hymn right for maximum healing, usually near the later Overwhelming ticks if you can go that long. For Discipline, your Light’s Wrath and/or Rapture will simply be amazing here if you get your Atonements set up for the perfect tick. Boom, everyone’s topped off. Time Release will be tough on Discipline since you only have Shadow Mend to bomb heals on. If you’re in a smaller group then you might find time to do so, if you’re in a larger group you’re better off letting your Paladins take care of it. Holy can easily use Holy Word: Serenity to instantly heal through the absorb or Flash Heal to chip away at it. 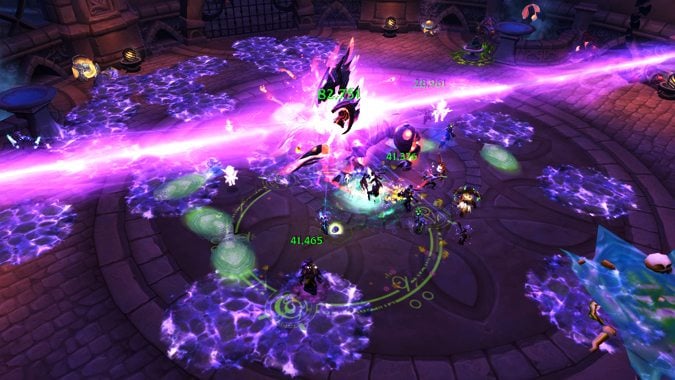 Trilliax is another fun flavor boss. Literally. There’s cake everywhere. Also, just listen to his voice lines. They’re delightfully creepy. He switches between Cleaner, Maniac, and Caretaker personalities throughout the fight, which changes the mechanics. The healing will be highly dependent on how well your raid performs the mechanics, since a lot of the damage is avoidable. Basically, your raid needs to be good about grabbing the cakes that go out and managing the scrubbers. Several times during the fight, Trilliax will teleport to the middle with a laser beam running through the area. It’s pretty easy to avoid just by running along his side as he turns, but watch out if he suddenly switches direction.

Fit your cooldowns in during the static time when your tanks are kiting him, and try to spot heal as best you can during the Annihilation laser. Watch out for shamans who try to pretend they’re helping the raid by putting down Spirit Link Totem, where in reality it’s a nefarious plan to kill you if you happen to be the only person in it with someone standing in the laser. The laser alone won’t one-shot people outside of mythic, but it doesn’t give a lot of leeway if you get caught in it.

Grab your cake slice early when there’s less damage going out so you can focus on healing as it ramps up and you also won’t be slowed when Annihilation comes out. If you get Arcing Bonds, run to your laser buddy. Watch out for people soaking cake slices or targeted by Sterilize, as they’ll need extra healing. Discipline can use Rapture during The Maniac phase to help with Mana Rupture or Power Word: Barrier on the laser. If your raid is good with mechanics you may be able to spread Atonement and then DPS your heart out. If not, you may have to go Holy to play catch-up. If there are any cake slices left up during The Cleaner phase Trilliax will cast Cleansing Rage to get rid of them, exploding heavy damage on the raid. Holy will want to save Divine Hymn for this or use it after the first laser when you can stand still and people are taking extra damage from Sterilize or the Succulent Feasts for the Scrubbers. 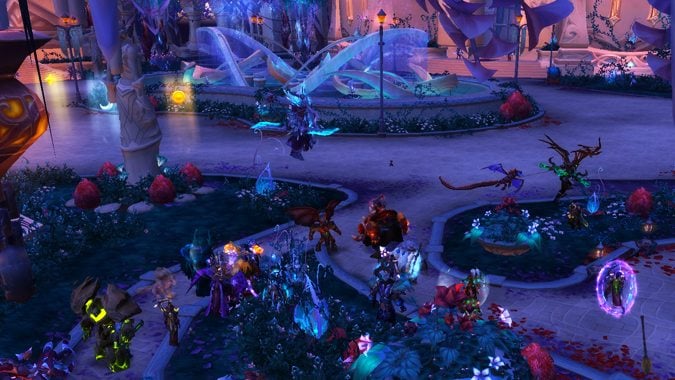 This fight can get pretty hectic. There are three phases: ice, fire, and arcane. Each one will put out debuffs on the raid and subsequently detonate. During the first phase (ice), Mark of Frost isn’t too bad because you can spot heal, unless the players affected don’t run into their swim buddy to drop Frostbitten stacks. Where the issues come is during fire and arcane when you have pulsing AOE. This is where you’ll want to use your cooldowns, especially during Detonate: Arcane Orb, since everything gets a bit chaotic and messy.

Discipline can use Rapture and Light’s Wrath to take care of the sets of mark explosions. Power Word: Barrier and Rapture will be very helpful during the arcane detonations. Holy can Flash Heal during ice and powerhouse AOE heal through fire and arcane. You’ll find quite a bit of use for Prayer of Healing since most everyone will be taking damage and it won’t be wasted. If you have the mana you can keep up the burst with Sanctify and Prayer of Healing. Your Divine Hymn will really help during arcane detonation. 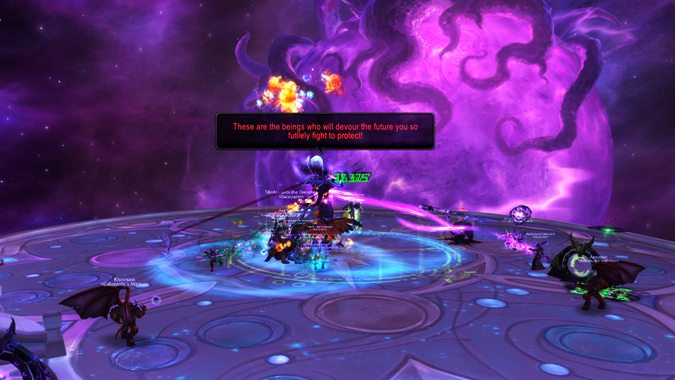 Etraeus has three phases: ice, fel, and void, all corresponding to the research he’s been doing. During ice phase, you’ll want to stack with groups. Icy Ejections will go out periodically, causing those people to spread so they don’t spread Shatter damage to other players. Top people off and spot heal the players targeted by Icy Ejection when it Shatters. During fel phase, everyone will want to spread out. Players will again be targeted by ejections, this time Fel Ejection which will leave a Felflame puddle on the ground, so you must keep moving until it wears off. Once again, the ejections will need spot healing.

During the third and final phase, void, everyone will stack up on the boss until the Thing That Should Not Be comes out, where your DPS will switch to it. It’ll periodically cast Witness the Void, affectionately referred to as Flash Bang by my raid. Holy won’t need to worry about turning away, since we can heal no matter where we’re facing. Discipline may need to turn if you’re DPSing the add, or not if you’re on boss duty. Etraeus is also casting Voidburst throughout this, which stacks and makes its way through the raid. The damage won’t be bad at first, but it does build up, particularly as you get your second or even third add. This is where you’ll want to use your cooldowns. 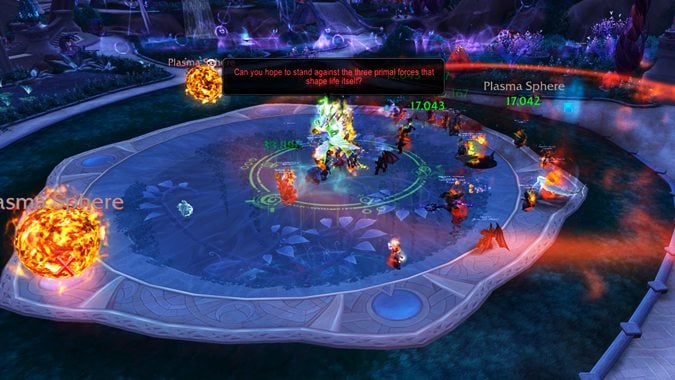 I’m pretty sure he’s voiced by the same guy who does Warden Mellichar in The Arcatraz and I really can’t unhear it now. Tel’arn starts out relatively simple: avoid the collapsing solar marks, avoid the purple chaos, dispel the plant. Once his clones come into play it gets a little more hectic since more people will be taking more damage. The tanks will require heavy single target healing for Recursive Strikes. If anyone runs into the spores, they’ll need extra healing to combat the ticking debuff. Stack on others to soak Call of Night. The Plasma Spheres will deal the most AOE damage, so use your cooldowns then, usually during the second orb explosion. Hopefully your DPS will stagger killing the spheres. If not, prepare for a lot of damage. 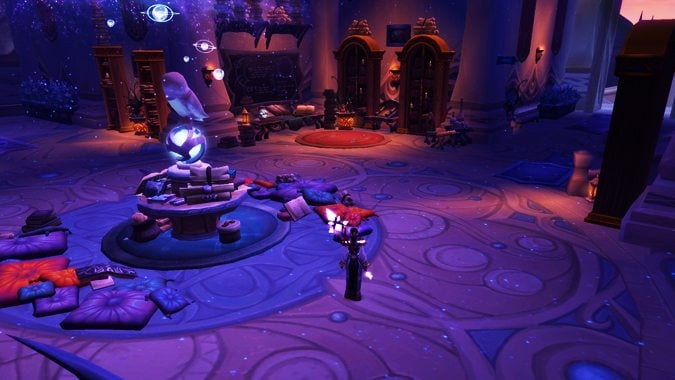 The first two wings are pretty fun, though in LFR there’s quite a marked difference between the difficulty of the first and the second. At least until people get used to the mechanics more. Next column we’ll cover the third wing that just came out, consisting of Krosus, Tichondrius, and Elisande, as well as the final fourth wing with Gul’dan.