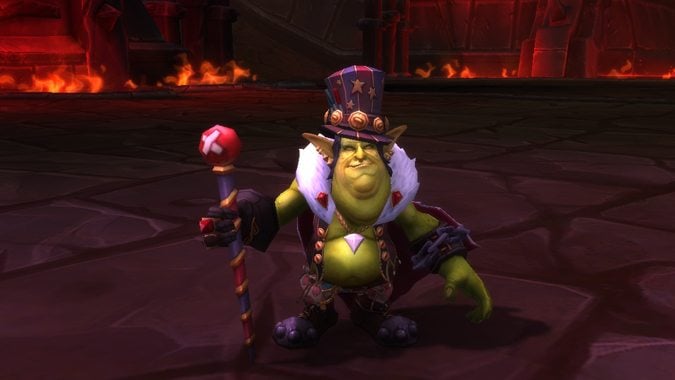 I ducked into Siege of Orgrimmar to pick up a few missing pieces for my wardrobe, and finally came face-to-chin with Gallywix’s new model. It was an experience I felt needed to be shared, because he’s…certainly…something, isn’t he? You’re welcome. Let’s get to your questions!

Q4tQ: is there any particular act by an NPC you find disdainful? My most recent example being Elisande’s post-mortem change of heart. “Oh! Now that you thrashed me I see I was wrong the whole time!”. As if that should suddenly change the relationship between her and the player, it’s utterly disingenuous.

The sudden turnaround of Grommash Hellscream at the end of Warlords of Draenor will likely always remain a mystery to me. It’s not just that he suddenly decides to side with us. It’s that we — and the Draenei population — are all of a sudden gung ho about having him around. There was no explanation for it. He cheers about Draenor being free, when he was a big part of the reason it was so screwed up in the first place.

QFTQ: the time gate quest this week in Broken Isles is looting chests…seems like an extremely good one because after 4 hours yesterday I have a grand total of zero chests. I used tomtom and paste and the known spots but every one of them had a guy sitting there waiting for the next spawn. Any tips?

They seem to have some kind of spawn timer. I couldn’t tell you what that spawn timer hinges on — whether it’s just a certain length of time, or people completing a certain amount of world quests on the Isle. But I do know that I managed to complete that quest in about twenty minutes, just by swinging around various spawn points and waiting for them to pop up.

You don’t have to worry about someone camping a spawn point, though. The chest can be looted by multiple people before it despawns, just like herb and ore nodes.

QFTQ: how do you feel about the weekly quests on the broken shore? Compared to Suramar it feels like Blizzard have really dropped the ball on this one – to the point where I can’t understand how they even got greenlit in the first place.

Follow up: would it be possible to waste the resurrection of illidan even more?

I have to admit, after everything Suramar handed to us, story wise, the Broken Shore feels incredibly underwhelming so far. I was really excited with the Suramar stuff because of the care taken to tell a story — each quest had meaning, and sure there were a few filler quests, but nothing too major. But every quest so far with the Broken Shore has felt like a filler quest. For an area that’s supposed to be really important to the game’s storyline, it’s feeling more than a little flat, you know?

Also keep in mind that I’m not including the Anduin quest chain for Alliance in this assessment — that chain was phenomenal. It also wasn’t part of the main Broken Shore quest campaign, either. It doesn’t count towards the achievement, it’s a standalone.

is it possible to get a legendary from pvp?

Yes – there’s a small chance you can nab a legendary from PVP strongboxes, arena wins, and rated/unrated Battleground wins. It’s as small a chance as anywhere else, but it is possible.

PRACTICALLY HALF THE COMMENTS ASKED:

Do you think Christie Golden not being able to say what she’ll be doing at Blizzard is due to a new project (not a new IP, but a new series of books, or shorts, based on existing property) that Blizzard won’t announced until BlizzCon, and that’s why they want to keep it a secret? If so, we’ll have a long time to wait to find out. I’m really excited to hear what she’s doing there full time.

No, I think it’s probably a case of not wanting any formal announcements until all contracts are signed and the position is underway. I highly doubt it’s any kind of hush-hush secret project —  it’s probably just one kind of protocol or another that they have in place for new employees. Blizzard likes to make official announcements for these kinds of things, after all.