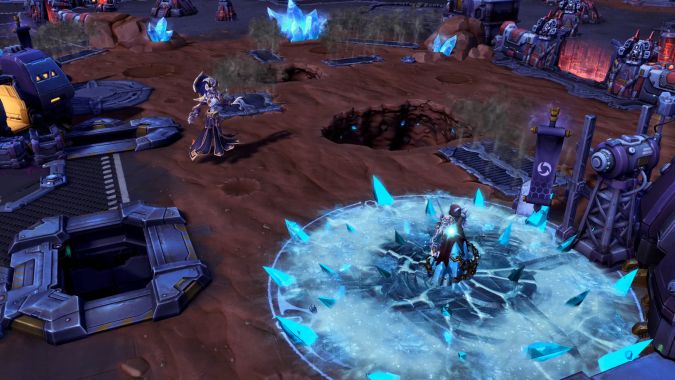 I’m still happy-crying over today’s Kel’Thuzad reveal as the next hero coming to the Nexus. Everything else — the Dreadlord Jaina skin, the Call of Kel’Thuzad event to celebrate his arrival, this cat-creature-thing that may or may not be a Bigglesworth skin — is just icing on the cake. And speaking of icing, Kel’Thuzad’s abilities are already live for perusal on his hero page, and they bring home the idea of the Necromancer as a wielder of Shadowfrost magic.

A key to Kel’Thuzad will be utilizing his trait to build stacks of Blight. His kit doesn’t look as bursty as some Assassins, but it certainly is going to disrupt the heck out of enemies, thanks to a plethora of stuns, roots, and chains. Combined with his traits, he’ll be a deadly hero that’ll make escaping team fights incredibly difficult for the other team. Take a look:

We don’t have a Hero Spotlight for Kel’Thuzad just yet, but I’m not going to complain about that. We have Kel’Thuzad, both in cartoon and in-game form. That’s enough for me. Plus, his abilities are fairly straightforward and already paint a good picture of what we should expect from him when he arrives in the near future. I don’t know about you, but I’m hyped!

Blizzard Watch is made possible by people like you.
Please consider supporting our Patreon!
Filed Under: Kel’Thuzad, Kel’Thuzad Abilities, KT HotS
Advertisement