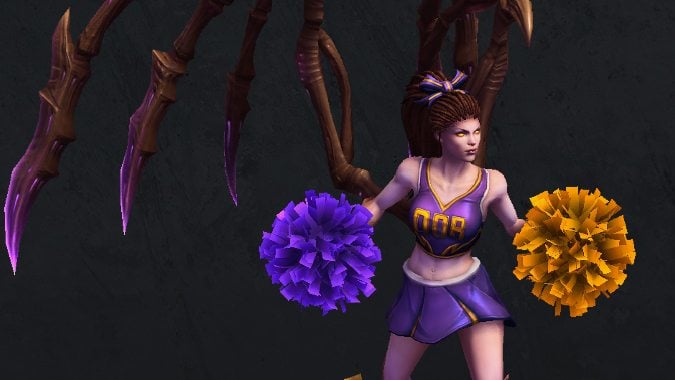 Heroes of the Storm released its latest balance patch earlier this week and some of the larger changes caught players by surprise. Notably, both Kerrigan and Chen received nerfs. Neither character is particularly popular in Heroes and what little data players can access through third party websites shows these characters with a less-than-stellar winrate. Initially, these nerfs felt like salt in open wounds.

Blizzard, of course, has more win/loss data at their fingertips than players do. According to their data, Kerrigan’s winrate has been steadily climbing over time and her changes aren’t meant to be a nerf, but a reallocation of damage. Kerrigan’s use of Ravage has been her niche thus far, but some of her Ravage damage has been moved to her other abilities. Why Chen deserved a nerf remains a mystery.

The Butcher has also received some changes to remove some cheese from his playstyle. Since his rework, Butcher earned 25 Meat towards his quest with every player kill — but only lost 10 on death. Dying in a one-for-one trade became a viable strategy. Now, Butcher will only earn 20 Meat per kill and lose 15 on death. He’ll still come out ahead in a one-for-one trade, but not so dramatically.

You can find the details of all of these changes and more in the patch notes below.

Developer Comment: With his built-in cooldown reduction from Betrayer’s Thirst, we wanted to give his enemies a bit more time to prepare – I’ll bet he didn’t see that coming.

Developer Comment: Kerrigan’s win-rate has been at a steady 1-2% climb each patch for the last few months. While she is not demanding picks or bans at the moment, as of last week she was sitting on top of the Nexus. After closely analyzing her numbers, there was nothing standing out as a major reason for her climb upwards. So instead of doing anything massive, we felt it best to do a slight damage redistribution. Moving a small percentage of her Ravage damage into her other abilities will help with some talent pick/win rate issues while also bolstering her skill-shot abilities.

Developer Comment: From inception, The Butcher has had a long healthy life amongst the top 5 win-rate Heroes in the game. Previously this was primarily isolated to Quick Match and his overall play-rate wasn’t high enough for us to have any major concerns. After the newest round of changes, he has stayed true to his name in Quick Match and is beginning to pick up steam in Ranked play. We agreed with the massive amounts of feedback that it felt odd that a Butcher could so willingly trade his life for an enemy kill to progress his quest. These changes to his Meat gain/loss should help bring these situations more in-line, while the talent changes were directed fully at bringing over and under-tuned talents closer to the power level expected at the respective tiers.

Developer Comment: These changes are designed to reduce the reliance that Auriel has upon a hyper-carry style character to be an effective healer.  By increasing the amount of Hope that she can generate but removing Bursting Light and its ability to reduce the cooldown of Ray of Heaven, Auriel will have more consistent healing output regardless of who is currently Bestowing Hope.  We’re also reducing the damage that Auriel does on average by gating it behind getting the most of her Basic Abilities.  By reducing the synergy that Auriel has with a single massive source of damage and reducing her damage output, we hope to make her less common in double support team compositions.

Developer Comment:  We’ve found that by increasing the niche of Uther, players could easily build teams with 2 Supports that were incredibly difficult to counter, thereby creating a slow gameplay trend that could be frustrating to play against.  We think it’s great to see double support every once in a while, but Uther enabled it too well when paired with almost any other healer.  By reducing the Armor he grants via his Trait and getting a little more healing throughput, Uther should feel slightly more well-rounded.

Blizzard Watch is made possible by people like you.
Please consider supporting our Patreon!
Filed Under: Kerrigan, Patch Notes, The-butcher
Advertisement