Junkrat brings the mayhem in latest Heroes of the Storm spotlight 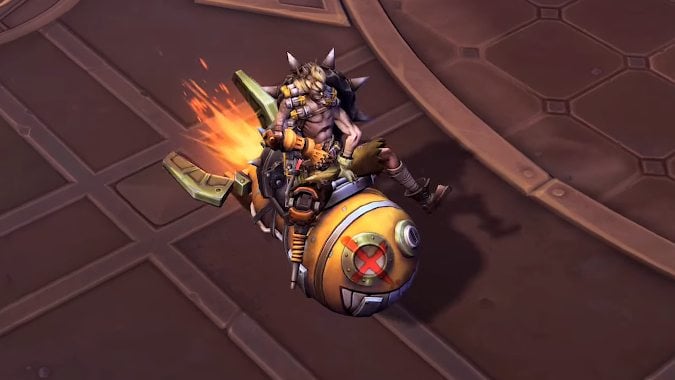 Junkrat, beloved trash mouse of Overwatch, will be the next hero to join the Nexus in Heroes of the Storm. His new hero spotlight displays Junkrat as a character who not only deals massive damage, but is a master of sowing chaos on the battlefield.

Seeing Junkrat’s Concussion Mine in action is impressive — it’s a truly enormous knockback which not only displaces enemy heroes, but even has the potential to knock them over terrain. I expect Junkrat will come to be defined by his use of that ability. A good Concussion Mine can set a hero up for a gank, or effectively remove them from a team fight. It can also provide Junkrat himself with a get out of jail free card, hurtling him over terrain to safety. Meanwhile, a poorly played Concussion Mine could be a terrible thing — spreading the enemy team out and foiling a wombo combo.

His second Ultimate, Rocket Ride, is also just plain wild. Mechanically, it’s similar to Johanna’s Falling Sword, but its outcome is massive damage and total chaos rather than a tank’s engagement tool. Rocket Ride has the drawback of briefly removing Junkrat from a fight as he runs back from the spawn room, but that could be seen as a benefit, too. If Junkrat gets cornered and Concussion Mine isn’t available, Rocket Ride can punish his pursuers with heavy damage while also delivering him to safety.

I, for one, cannot wait to play the garbage gerbil.

Blizzard Watch is made possible by people like you.
Please consider supporting our Patreon!
Filed Under: Hero Spotlight, Junkrat
Advertisement