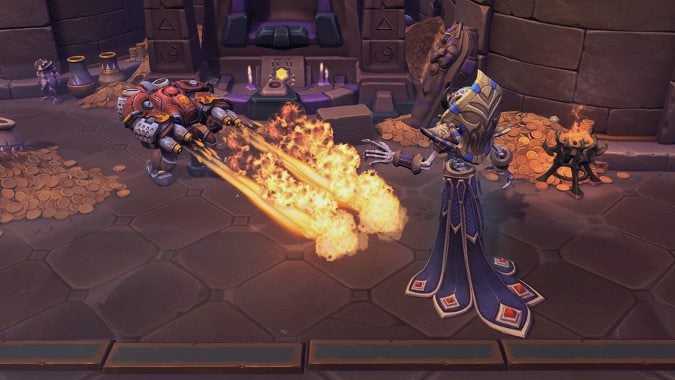 Blaze, the latest addition to Heroes of the Storm, enters the Nexus this week. Though the hype around his release hasn’t exactly been soaring, he appears to be a solid tank character all around — and downright fun. Playing with fire is always a good time and his Bunker Drop ultimate will undoubtedly lead to some amazing highlights.

Today’s patch will also include the Malfurion rework we saw on the PTR last week. In addition, and as usual, all of this arrives with the latest free hero rotation.

Tassadar pairs well with some of the other free heroes this week such as Tracer and Illidan. They’re both nimble, low-health heroes who deal their damage primarily through autoattacks. Tassadar’s shields not only provide them with a health buffer preventing them from being blown up, but while they’re shielded, their autoattacks heal them, too. Raynor and Sonya can also benefit from Tassadar’s shields, but not quite to the degree Tracer and Illidan do.

On the flipside, with these combos in play, Kel’Thuzad is a sitting duck.

Blizzard Watch is made possible by people like you.
Please consider supporting our Patreon!
Filed Under: Blaze, Firebat, Free Hero Rotation
Advertisement