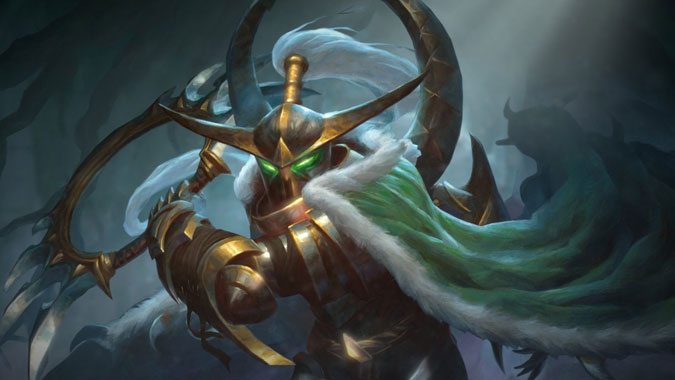 A new build has hit the Heroes of the Storm PTR today and, in addition to Maiev and the return of the Lunar Festival, the patch includes some surprises: a small Malthael overhaul, buffs to Greymane’s Cocktail, and preliminary testing on in-game voice chat.

The Malthael rework is an attempt to ease back his reliance on his most-picked Heroic ability, Tormented Souls. His basic attacks now cleave to hit multiple targets, thus applying his Mark to multiple targets. Death Shroud has also been given a wider area of effect. It should now be much easier for Malthael to apply his Mark to targets — but as a trade-off, his power has been scaled back elsewhere. Not only does his Mark do less periodic damage, but abilities such as Soul Rip heal him for less per target. Overall, it’s likely he’ll be a worse duelist after the changes but more effective in a team fight or dealing with minions — with or without Tormented Souls.

Meanwhile, Greymane has had some of his Cocktail talents baked into the base ability,  making it more effective in general use. His changes will hopefully open more talent build options. Check out the full notes below:

Join us in celebrating Lunar Festival this year by completing matches in Versus A.I., Quick Match, Unranked, or Ranked modes, and you’ll pick up some sweet new loot! The event kicks off during the week of Tuesday, February 6, and concludes on Monday, March 5, so be sure to complete the quests below before Lunar Festival comes to an end.

Maiev Shadowsong stood watch over the imprisoned Betrayer for ten thousand years, and hunted him relentlessly after he was released. Some say she’s determined; others say she’s obsessed. Either way, she will stop at nothing to ensure the security of her world.

Developer Comment: We made these changes in an effort to increase Greymane’s build diversity. Gilnean Cocktail felt a little lackluster without its associated Talents, so made parts of them baseline. While you can still enhance Gilnean Cocktail through talents, we wanted it to feel like a valuable part of your kit if you choose a more Basic Attack-oriented build. We’ve also redesigned Wizened Duelist to be less of a feast or famine Quest by shifting its requirements to something that a Greymane in a losing game can still accomplish. This also has the added benefit of being a reward that can be accomplished regardless of the lethality of a game (since the average number of deaths can vary greatly between different levels of play).

Developer Comment: Malthael, while powerful, has relied heavily on Tormented Souls to apply his Reaper’s Mark during team fights. By making his Basic Attacks cleave and increasing the usability of Death’s Shroud, we’re providing more ways to him to apply his Mark to multiple enemies. Not only does this increase his survivability and damage without relying solely on Tormented Souls, it also gives him more options to use Wraith Strike. We’ve also sought to increase the usability of Last Rites to make it a more enticing Heroic option. Lastly, the ability to apply Reaper’s Mark reliably makes it much more powerful, so we’ve adjusted the tuning of its damage and associated Talents.

Head over to the latest In-Development blog to catch a preview of all the new cosmetic items coming to the Nexus with this patch.

Players will no doubt have divided opinions about the implementation of in-game voice chat. Opinions have already been mixed since it was first announced at BlizzCon. Hardcore, competitive players insist a game like Heroes of the Storm absolutely needs voice chat to be taken seriously — while other players would really rather be left alone when it came to voice. I, personally, appreciated Heroes as a nice refuge from the proliferation of voice chat in multiplayer games; I really don’t feel the ever present risk of strangers screaming in my ears is worth my time. Hopefully, if I stick to casual game modes, the people in my group won’t pitch a fit when I have voice chat turned off.