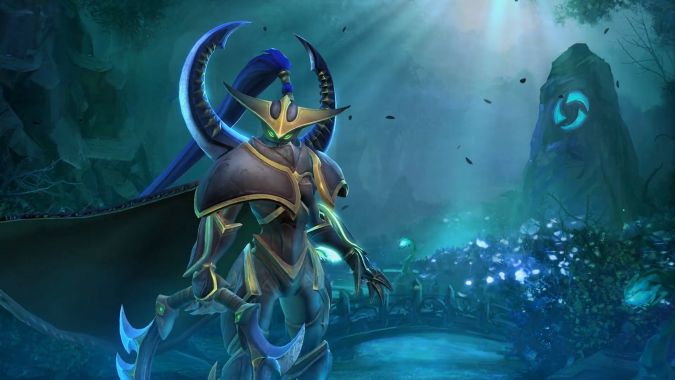 Today’s Heroes of the Storm patch is going live this morning and introduces Maiev, Lunar Festival 2018, and a variety of changes to existing heroes. Hanzo has received a pair of nerfs targeting Never Outmatched and Sharpened Arrowheads, though his movement-related bugs have not yet been fixed. Amusingly, Maiev has received a minor nerf before even hitting live realms. While she had a passive 15 Armor on the PTR, that has since been reduced to 10 Armor.

Malthael received a minor rework in this patch, and from players’ experience on the PTR, the playerbase isn’t sold on it yet. His autoattacks now cleave, which makes it easier to apply his Reaper’s Mark, but the trade-off is significant. In exchange for easier Marks, his damage and self-sustain have both been severely nerfed. He’ll be more successful against a group of clumped up enemies, but his ability to go toe-to-toe in a lane has evaporated. Considering solo laning was considered one of his strengths previously, it’s a big change.

Our most recent Heroes of the Storm patch featuring Maiev, Voice Chat, and balance updates is now available for play.

Join us in celebrating Lunar Festival this year by completing matches in Versus A.I., Quick Match, Unranked, or Ranked modes, and you’ll pick up some sweet new loot! The event kicks off during the week of Tuesday, February 6, and concludes on Monday, March 5, so be sure to complete the quests below before Lunar Festival comes to an end.

Maiev Shadowsong stood watch over the imprisoned Betrayer for ten thousand years, and hunted him relentlessly after he was released. Some say she’s determined; others say she’s obsessed. Either way, she will stop at nothing to ensure the security of her world.

Developer Comment: We made these changes in an effort to increase Greymane’s build diversity. Gilnean Cocktail felt a little lackluster without its associated Talents, so made parts of them baseline. While you can still enhance Gilnean Cocktail through talents, we wanted it to feel like a valuable part of your kit if you choose a more Basic Attack-oriented build. We’ve also redesigned Wizened Duelist to be less of a feast or famine Quest by shifting its requirements to something that a Greymane in a losing game can still accomplish. This also has the added benefit of being a reward that can be accomplished regardless of the lethality of a game (since the average number of deaths can vary greatly between different levels of play).

Developer Comment: Malthael, while powerful, has relied heavily on Tormented Souls to apply his Reaper’s Mark during team fights. By making his Basic Attacks cleave and increasing the usability of Death’s Shroud, we’re providing more ways to him to apply his Mark to multiple enemies. Not only does this increase his survivability and damage without relying solely on Tormented Souls, it also gives him more options to use Wraith Strike. We’ve also sought to increase the usability of Last Rites to make it a more enticing Heroic option. Lastly, the ability to apply Reaper’s Mark reliably makes it much more powerful, so we’ve adjusted the tuning of its damage and associated Talents.

Head over to the latest In-Development blog to catch a preview of all the new cosmetic items coming to the Nexus with this patch.

While the patch notes mention the new Voice Chat feature right off the bat, it isn’t actually live in the game yet. The addition of voice chat is a divisive topic to say the least, especially with Blizzard’s (real or perceived) lack of enforcement on toxicity issues, so it might be for the best that the community has a little more time to discuss the issue.

Blizzard Watch is made possible by people like you.
Please consider supporting our Patreon!
Filed Under: Hanzo, Maiev, Patch Notes, Voice Chat
Advertisement