Maiev and Lunar Festival arrive alongside this week’s Heroes rotation 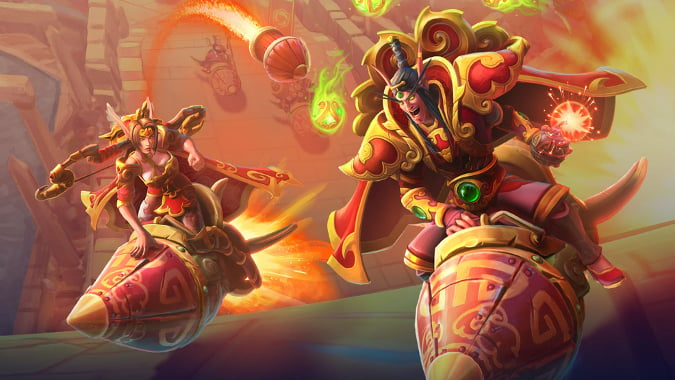 Today’s likely to be a big one in Heroes of the Storm. Assuming all goes well, Maiev will be making her way onto live realms with all of her mobility-punishing, assassiny goodness. I, for one, am pretty excited about it. Maiev has always been one of my favorite characters from Warcraft 3 and her Heroes of the Storm incarnation seems pretty amazing. If nothing else, her talents are chock full of great Warcraft 3 references such as Naisha’s Memento which allows Maiev’s basic attacks to cleave.

In addition to Maiev, Lunar Festival will begin in Heroes of the Storm today and run until March 5. Lunar Festival comes with the usual suite of cosmetics, as well as new skins for Kael’thas and Sylvanas. While the event also includes a new Brawl, we’re not entirely sure when the Brawl will go live. Typically, the Brawl doesn’t rotate until slightly later in the week, so we might not see it until Thursday or Friday at the earliest.

We also have a new hero rotation this week, of course. Nova is on the rotation this week, so hide your mages — or at least cover their butts so they don’t get sniped off the face of the earth. Valla is both on this week’s free rotation and on sale this week for 150 gems; I wouldn’t recommend spending the gems on her. She’s a fantastic hero, but she’s already one of the cheapest heroes at 2,000 gold. Save your gems for something a little more valuable.

Blizzard Watch is made possible by people like you.
Please consider supporting our Patreon!
Filed Under: Free Hero Rotation, Lunar Festival
Advertisement