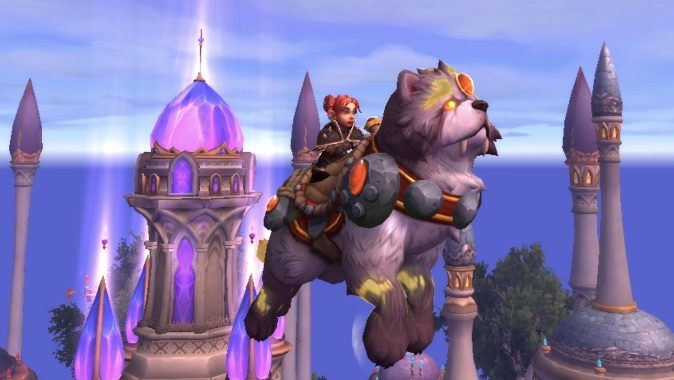 The battle for the floof begins. After Shu-zen was added to the Blizzard store, players started complaining that this adorable doggo was a little too small. Well… with every character except a Gnome (and probably Goblins, too), so I really don’t see the problem. After all, my Monk looked great hanging out with her new pal Shu-zen.

But Blizzard, always eager to pander to the interests of non-Gnome players, decided to address this problem only a few short hours after the doggo’s arrival on the scene. Quick as can be, Blizzard increased Shu-zen’s floofiness by 30%. That, my friends, is maximum floof.

Originally Posted by Ythisens (Official Post)
I actually submitted this feedback per some early comments on Reddit this morning and we agree, this doggo is too smol.

His floof is being increased by approximately 30%.

This should be going live soonish.

As disappointed as I may be at Blizzard’s favor of all things non-Gnome, I must say I do appreciate floof. Perhaps I can forgive them for changing this absolutely-perfect-for-Gnomes mount. But apparently maximum floof was too much for the game to handle. The new larger Shu-zen looked a bit ridiculous for everyone, and his floofiness levels practically devoured characters of all sizes. Almost as quickly as his floof was buffed, it was nerfed again.

Originally Posted by Ythisens (Official Post)
Looks like the floof was too great and is starting to consume some of the riders. We’re changing him back to his floof volume from this morning while we see what we can do to maintain the mane.

And so we say farewell to Shu-zen’s fabulous floof (and hello to his Gnome-appropriate size) in what must surely be the fastest mount buff/nerf cycle we’ve ever seen. The floof may be back in a future fix… but until then, why not roll a Gnome? (Or a Goblin, if you must.)

See, there’s a solution to every problem.

Blizzard Watch is made possible by people like you.
Please consider supporting our Patreon!
Filed Under: Floof, Shu-zen
Advertisement