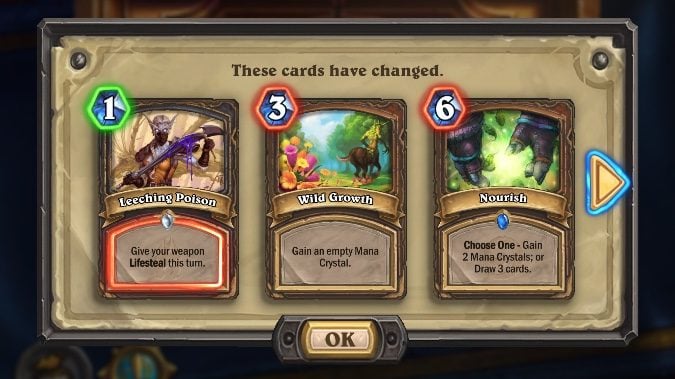 Usually we get a little warning before card changes land in Hearthstone, but today’s round of balance changes were only announced last night — at 11pm Pacific, to be exact. While late night bug fixes aren’t unheard of, these were some pretty significant balance changes that will break some of the game’s most popular decks. Here’s what Hearthstone players can expect next time the log in… and, for those of you who aren’t Hearthstone pros, just what they mean.

Both of these cards allow Druids to gain extra mana crystals, which has been a defining feature of the class since the game launched. Wild Growth let a player gain one mana crystal while Noruish let a player gain two mana crystals, which will start out empty. This meant that Druids could spend their first few turns doing nothing but taking a beating while they built their mana pool, but let them get out high-mana cost cards sooner than their opponents — which was often a serious game-changer.

Now, Druid decks won’t be able to gain mana quite as quickly, so they shouldn’t be able to get such a big mana advantage. Blizzard wants these cards — which are staples in almost every Druid deck — to feel less mandatory to encourage creative deckbuilding. But was this really necessary? Not every deck focused on ramping up mana for big late-game combos, and it felt like decks that made the most use of these cards sacrificed early-game power for late-game power.

Also, this is a change that likely to hurt players who aren’t big spenders. Because these were from the classic set — Wild Growth a basic card that anyone gets and Nourish a rare that was easy to get or craft — they were obvious adds to any budget Druid deck.

But budget or not, these changes are a big hit to Druid decks.

The rest of the changes are focused on bringing down some specific decks:

What does all of this mean?

One notable shakeup is WSOE, a Hearthstone tournament with $30,000 in prize money that’s scheduled to kick off tomorrow morning at 10am. As is typical of Hearthstone tournaments, players are required to send in deck lists in advance and can only use those decks. The tournament has extended its deck submission deadline and is allowing players who already submitted decks to resubmit them — but it leaves competitors scrambling to come up with new decks before the tournament begins.

Some of these nerfs — like Shudderwock — seem like good changes to curtail extremely powerful cards. But the Druid nerfs really leave me wondering. It’s clear that the Hearthstone team wants to shake up the Druid meta, but I’m not convinced that a nerf to some of Druid’s class-defining cards was the best way to go about it. Still, we’ll have to wait and see just what it does to Druids moving forward.

Arena adjustments are coming, too

These aren’t really nerfs and they aren’t really buffs — just changes designed to keep Arena competitive and fun (hopefully). Rastakhan cards will now show up 50% more often and a number of cards are going to be available in drafts again. Most notable is the one card being removed: Mind Control Tech. Blizzard felt the card was too punishing in Arena play, so now it’s gone.

Check out the full list of changes for all the details.

And if you need something to do while you figure out which decks to play, Winter Veil is on in Hearthstone. It comes with a new Tavern Brawl where you create a deck and then give it as a present to your opponent. You’re both stuck playing with the other’s cards until turn five, when you can play a “gift receipt” card to trade back. It’s a strange but fun little brawl, and if you win you get a charming gingerbread card back.

There’s also a new card bundle, but considering it doesn’t include any Rastakhan packs, it’s kind of hard to get excited about — but your mileage may vary.

All of these buffs and nerfs and rewards can be yours when you next log on to Hearthstone.

Blizzard Watch is made possible by people like you.
Please consider supporting our Patreon!
Filed Under: Hearthstone Druid, Hearthstone Nerfs, Kingsbane, Shudderwock
Advertisement