The Queue: The hare cheated; history was not repeated 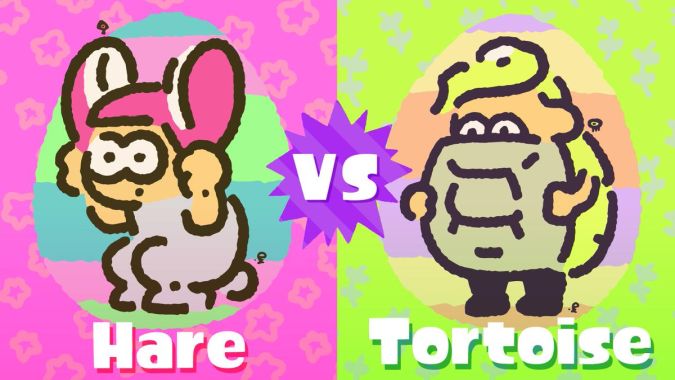 Despite being a 48-hour Splatfest, I didn’t partake in this one nearly as much as I have in the past. Mostly because it was Easter weekend and I was pretty busy. However, I will say, I am strongly disappointed in the results. Hare beating tortoise? Pffft. Nope. Never. Wouldn’t happen.

Oh well, whatever. I’m not mad.

ARTHONOS, I THINK YOU KNOW MY ANSWER, BUT I’M GONNA GIVE IT ANYWAY:

An entire expansion for sure. Not just because I totally have a bias toward that content, but because I think it deserves more than a zone/small set of zones. There is SO much that could be done in that setting. It was an entire freaking empire, for Yogg’s sakes. I really want Blizz to go all out when/if they let us visit The Black Empire. I don’t want it to be anything less than its best.

Repost4tQ: What is Mitch to do regarding his romantic life? Sylvanas has always been there for him, but Xala just really gets him you know. It’s as if she can just dive into his mind, and know what he’s thinking.

If you were inducted into the Infinite Dragonflight, and they gave you a project to lead to change an event in Warcraft history, what would you change?

I’m sure there are a whole lot of events to choose from, and they’d probably be better, but you know what? I’d make them change it so Sylvanas killed Arthas, preventing the Lich King from ever existing and the Forsaken from ever being formed. Can you imagine how much the world would be different in that world? Not to mention, how tragic would it be if Alliance players HAD to go in and allow Sylvanas to die, knowing it would not only guarantee Teldrassil burning but also everything that happened during Wrath of the Lich King?

Why would the Infinite Dragonflight do this? I don’t know. Let someone else come up with that bit. Maybe essentially preventing The Frozen Throne would mean the Alliance and Horde would never form, thus dooming the world when the Legion invades. Maybe it would mean we didn’t go to Northrend and Yogg-Saron gained enough power to spread his influence farther and become unstoppable. Whatever the case, it would be an interesting scenario.

SJHAWK, I’M GOING THROUGH A BIT OF WITHDRAWAL, TBH:

Graduated to a Black Mage yet?

Sadly, I didn’t really play much at all this weekend :( I’m… 28, I think? I got my chocobo, though, which is super cool! I’m starting to get the shtick of Thaumaturge more, too, so it’s more interesting than before. I’ll still probably roll Red Mage when I can, because it looks and sounds like what I want out of a class. I’m excited to play when servers are up again!

Red: Okay, since the Salt vs. Pepper 2BE was too kind, I’m gonna make you guys work harder on this one.
2BE: Salt vs. Sugar
You can only pick one, to have for the rest of your life.
Go!

Kalcheus: 2BE: Beach vs Mountains

Salt. It’s a flavor enhancer, and I absolutely love adding it to things. Sugar, I don’t have a ton of as is, sooo…

I… haven’t played either. But let’s say Chrono Trigger.

What are you, a dating app? Beaches, Kyle.

Q4tMitch: Last week Adam had a queue that featured just 3 questions, but the answers were super long. For the sake of science, what if you answered all the questions, but with short answers? That way we could know for sure which gets more QQ.

Look, I love trolling. You know I do. But I’ve done that to The Queue once before — it was glorious and one of my favorite trolling moments ever — but it was followed up with an actual, non-trolling Queue later. I think Liz might actually kill me if I did troll the way you’re suggesting. I am curious, though… what do you guys prefer? Lots of questions with shorter answers? A few questions with long answers?

JOVAN DECIDED TO ANSWER ONE MORE QUESTION, EVEN THOUGH IT WAS FROM PIDIA:

Q4TQ: Are we all destined to simply die alone? Forever left to toil in this human existence we call society? Asking for a friend.

That’s all for today! Before I leave, though, there is a VERY important request from Liz:

Hey @MitchFizzl, are you going to be a good person and write a Queue that doesn’t result in 600 comments of Mitch worship?

Blizzard Watch is made possible by people like you.
Please consider supporting our Patreon!
Filed Under: Splatfest, Splatfests
Advertisement