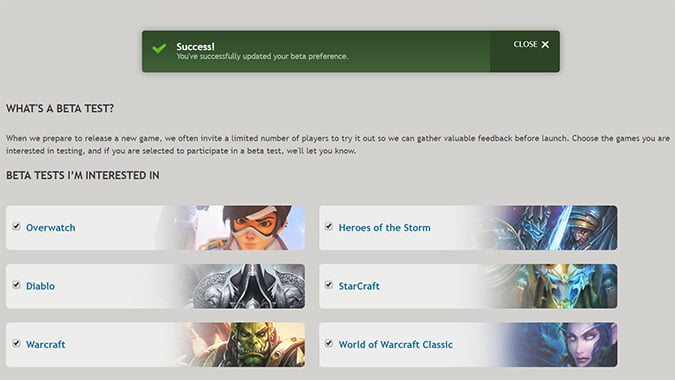 The WoW Classic closed beta is finally here, just a few months away from the game’s full August 26th launch. Here’s how to properly sign up for the beta and avoid any scams that promise you a beta key.

The most important thing you should note is that there are no official beta keys. Blizzard opens the gates to their betas by granting access to your account — not sending you a beta key. If you’re in the beta, you’ll be able to download and play the WoW Classic client from your Battle.net launcher. If not, you aren’t in the beta. It’s easy to be tricked into thinking you’ll get a beta key from an email that looks like it’s from an official Blizzard address, but don’t believe their lies — they’re all fake.

To actually get access to the beta, which has already started and continue to add more players, you need to sign up via your Blizzard account management page. Under Games & Subscriptions, scroll down to Beta Access and visit the Beta Profile Settings page. Once there, you’ll see a grid of available betas you can opt into. Once you’ve checked WoW Classic, hit Update Preferences and you’re set.

Blizzard said it will choose players who have active subscriptions to the regular game based on a variety of factors to help them test the beta. It could be based on your PC, your commitment to the game, or just your luck. If you get in, you’ll likely receive an email, but if not, you can check your launcher. And remember: as with any beta, your progress will not be saved for when the game launches later this year.

The WoW Classic beta will run from May 15 to July 19. Everyone with a subscription will be able to make three characters and claim their names on August 13. And even if you don’t get in immediately, there will be plenty of streamers to watch play it until your time comes.