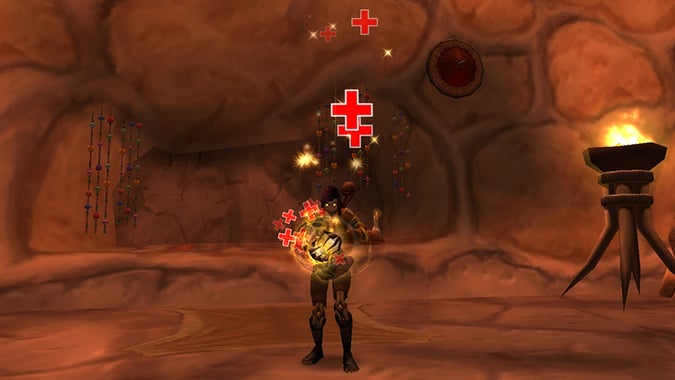 If you’re playing WoW Classic and want to bring your First Aid profession to artisan level, you’ll need to get through a tricky quest. That quest requires you to heal patients before they succumb to their wounds. It takes a bit of prep work, but it’s easily done if you follow a few tips.

The only requirements for the quest are that you must be at least level 35 and have a First Aid skill of 225. It’s a small ask for anyone who is still doing quests and leveling up because bandaging yourself helps immensely during that period. If you’re not already invested in First Aid, you should be. Almost every class benefits from being able to heal themselves while fighting several enemies.

Once you’ve gotten more than halfway to level 60, you’ll be able to pick up either Alliance Trauma or Horde Trauma. The Alliance quest is picked up in Ironforge and the Horde one is picked up in Orgrimmar. Both quests lead to the eventual Triage quests that will grand you Artisan First Aid. If you want to skip the initial quests, you can travel to Duswallow Marsh for Alliance or Arathi Highlands for Horde.

The Triage quests require you to save 15 patients who have one of three statuses: critically injured, badly injured, and injured. Once you save the required amount you’ll complete the quest. If six patients die before you can get to them, you will fail it. The quest giver will give you bandages to use which you should put on your action bars for easy access.

The trick to the quest is positioning yourself in such a way that you can see all of the patients and click on them. You can make this easy by turning on ally health bars and planting yourself in the middle of the room. This setup might force you to start the quest once and fail it as you get yourself situated. When you’re ready, you need to heal the patients in the priority that follows: critically injured, badly injured, injured, and most recently spawned. Remember that you can bandage one patient and pre-click on the next one before the channel is finished, saving time in between.

It’s not too difficult if you come prepared. As a one-off quest, it can be pretty confusing and overwhelming. If for some reason someone else is also doing the quest, you can team up with them and make it way easier by working together. Otherwise, it should be simple to complete by yourself with a few tries. And when you’re done, you’ll be able to make even better bandages that should keep you healthy for the remaining 25 levels!

Blizzard Watch is made possible by people like you.
Please consider supporting our Patreon!
Filed Under: First Aid, Triage Quest, Vanilla Wow
Advertisement