The Queue: Look at that big butterfly 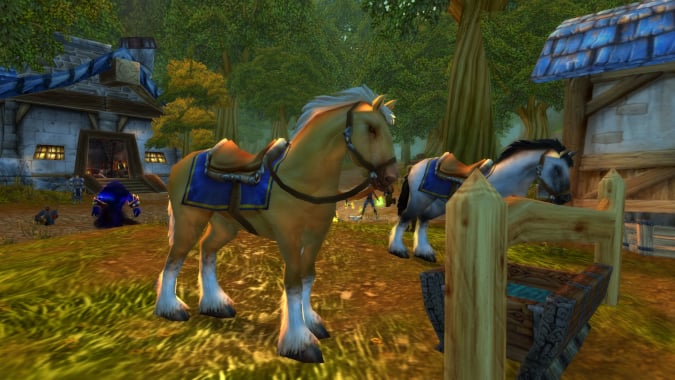 I’ve wanted this butterfly for a super long time, so it’s only natural I start off The Queue today with an image of it. Look at that wingspan. Just glorious.

MUSED MOOSE & JALAMENOS ASKED A SIMILAR Q, SO I’M GROUPING THEM TOGETHER

My guess is soon. I think the devs haven’t added anything recently because they didn’t want to take attention away from Classic’s launch, and now that it’s launched, they’re ready to start posting new builds again. I’m still hoping we get something about the war campaign that actually gives us a clue about where this is all going to go.

Q4tQ: Will there be retail news this week?
When will 8.2.5 come out? Is there even an 8.3 in the works? What’s happening Blizzard?

Meaningful news ran out 3 weeks ago, I’ve been running on fumes for longer than I can remember.

I think we’ll probably see more trickles of patch 8.2.5 news over the next month, and I think it’ll be slated for release sometime in Mid-November to early December. At this point I feel like we still don’t know very much concrete about 8.2.5 and I do think, perhaps with the exception of season rollovers in Overwatch and Diablo, that slow trickle is going to be about all we’re going to get going forward, unfortunately.

We’re getting to that time of year when all the news dries up, because the Blizzard team is trying to shore up as much great news and content as they can for BlizzCon. It happens every year, and this 2-month lull is a part of why we wanted to add in off-topic content to the site. While we do have a ton of other, Blizzard-related plans, for the next couple months we’re not going to get very much news other than leaks — which are hard to fact-check or substantiate by definition and as a result may not be reportable even if they end up being legit — and “leaks,” usually weird wishlists with a grainy phone pic of poorly photoshopped “proof.”

Why is “S” considered to be the highest in tier lists, and why does it skip “E” and go straight from “D” to “F” at the bottom?

This does vary in some niche games. My understanding is that the A-D, F range comes from school, where A-D is some varying level of mastery for the topic. Typically As are well-rounded heroes that don’t generally have a bad use, while Ds are heroes that can occasionally have some niche uses but tend to rely heavily on both situation and having deep synergy with the rest of the team. Fs, like in school, are automatic failures — while your team might win if you choose an F tier hero it’ll be in spite of your choice, not because of it.

S rank seems to have originated in Japan. Though the reasoning for the S is somewhat lost, it basically means something that’s so good it’s above the curve, and a must-pick or else must-ban in games with that mechanic. These are the heroes where — barring mirror matches of course — if you pick them you’re all but guaranteed a win. Mercy was like this for a while, when she had her AOE res ult.

The thing is, tier lists are generally based on a combination of actual mechanics and the perception from the community, the latter of which is heavily molded around the experience of pro players. A hero like Li-Ming in Heroes of the Storm might be an excellent choice in the hands of someone like Fan or Khroen, but because her being good relies heavily on the mechanical aptitude of the person playing them, you may be better off playing Sylvanas in your own matches even if she isn’t subjectively as “good.”

I’ve seen people requesting servers for The Burning Crusade and Wrath of the Lich King and I find myself scratching my head. Most if not all of the actual (story) content is all still there, just with mechanical changes on top of it.

The things that make me want servers or *something* restored is when actual story instances and/or quest lines have been removed. The Battle for Undercity after the Wrathgate moment or the whole Wrathion questline in Mists of Pandaria are the things that immediately come to my mind.

I imagine that those could be restored in the retail game, though, either by putting the Wrathion quests (minus the quest rewards?), or making the Undercity battle a queue-able scenario.

What reasons have you seen for actually recreating Burning Crusade and Wrath servers themselves?

There are a few motivations for wanting this. Each expansion’s endgame provided its own discrete set of challenges which were fun to pursue at the time. Just like a hunter may want to earn their Lok’delar, they may also want to see whether they’re up to the challenge of kiting striders in phase 2 of the Lady Vashj fight.

Burning Crusade‘s endgame raids pivoted quite a bit from vanilla, which was more about just getting 40 warm bodies in one place, with a small handful of people who really had to execute specific mechanics at any given time. Burning Crusade featured a whole lot of personal responsibility, required from everyone in the raid. Improperly using the Tears of Elune on the Archimonde fight is a popular example. Nearly everything required attunements which your guild would help you with but ultimately rested on your shoulders. Burning Crusade was also the first time we really saw daily quests, especially on the Isle of Quel’danas, which gave people an endgame pastime outside of raiding or preparing to raid.

Wrath went all in on the daily quest mechanic. It ditched the attunements as clunky — which, as a guild main healer who therefore had to run Shadow Labs roughly a billion times to get everyone into a varied array of raids and 10 mans, yes — but kept the personal responsibility by making you keep up with rep. Wrath was arguably also the last time the story even slightly made sense, as opposed to hopping backward and forward in time. Leveling through Cataclysm‘s version of Stonetalon where Garrosh is chucking dudes off cliffs into Burning Crusade‘s Nagrand where he’s a nobody with crippling depression is still kind of a lot.

Both Burning Crusade and Wrath were the culmination of some of Blizzard’s biggest storylines ever. We killed Illidan! Then we killed Arthas! Being there and experiencing that — especially in Wrath where the presence of Arthas oppressively hung over every zone in some way — was really special.

I get it. But I agree that Classic was a bit of a pandora’s box here.

DOMEHAMMER IS DEFINITELY THE MOST STYLISH PERSON IN THIS QUEUE

One thing about Classic has made me really annoyed with Cataclysm as a expansion. It is something I’ve always hated about Cata but had mostly forgotten about. What I’m annoyed about is all the models removed by Cataclysm revamp. As I play Classic I’m seeing these removed models and then thinking “I would love to be able to transmog to this on retail.” but I can’t because the models were removed.

So that inspires me to ask this Question for the Queue. Does Classic remind you of any changes you hated in past but had mostly forgotten about?

Why the eternal heck do I have to re-enable Find Herbs when I die? This isn’t really a response to the question, I’m just mad about it.

There are honestly very few things I’d like to have back on Live, but they’re mostly related to nostalgia and models, or else completely OP mechanics that definitely had to go. Rolling ignites were sweet to play with, but I can definitely appreciate why they got the axe, for instance.

I do really miss seeing those stupid origami frogs and rabbits around. It’s entirely related to nostalgia, and the new models are better in literally every single way than the old ones — but still!

VULKAN IS HAVING A GREAT TIME IN CLASSIC!

Q4tQ: Is there anything you didn’t know you missed from retail until you played classic? For me it’s the sense of community and how eager is everyone to help, buff and group to quest

First of all, maybe it’s because I’m playing a rogue, but I haven’t had that experience of everyone coming together with hugs and rainbows and driveby buffs. My experience so far has been trying to kill one mob at a time and then waiting on respawns, even in the otherwise-worthless areas I used to use as my best grinding spots, like that one field of Harvesters right next to the bridge to Duskwood. People ignore my group invites and then run by with Thunderclap, or see me sap a mob and then Arcane Shot the mob next to it which was already attacking me. It’s bizarre to hear that everyone is having a great time with randos because I absolutely am not.

That said, I’m still mad that I can’t have a Palomino horse, a Black Nightsaber, or the Mottled Red Raptor. The Palomino in particular was one of my few wishlist items for WoW Classic from the second it was announced. I was within a hundred gold or so of finally getting it in the original game when it was removed as being “less epic” than the newer ones they added after release with random armor and glowy eyes. Blech. I ended up dropping a couple thousand extra gold on runecloth for Darnassus rep to get an (also armored) Mistsaber because I was so mad about it.

It’s especially galling since they continued to use the model in the game, even in Classic — I just can’t use it as a mount.