Original Hearthstone characters that need to be in WoW 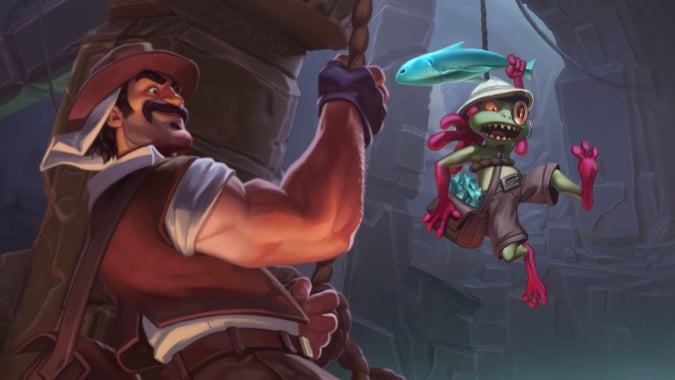 Hearthstone’s original inspiration came from World of Warcraft. The eight classes, the spells, the minions, and the Legendary cards all took their inspiration from Blizzard’s successful MMO. Over the years, Team 5 plumbed the depths of WoW lore. By the launch of Goblins versus Gnomes, many of the iconic spells and characters from WoW had been added. GvG saw the introduction of two generic minions with a bit more personality than most: Snowchugger and Annoy-o-Tron. This was Team 5 taking their first steps towards original Hearthstone characters. Annoy-o-Tron would grow up and become Sir Annoy-O during last years Hallow’s End event. 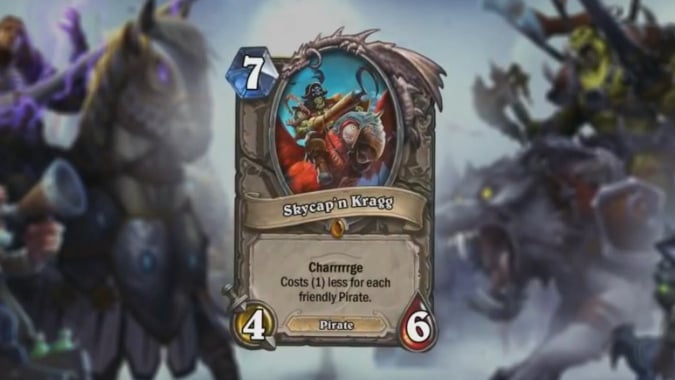 The first original named character in Hearthstone was Skycap’n Kragg, introduced as part of the The Grand Tournament set. Since then hundreds of new characters have joined him, but they were constrained to the bounds of their two dimensional world. At the 2017 Blizzcon, Blizzard unveiled Battle for Azeroth and players got a chance to demo two of the dungeons: Atal’Dazar and Freehold. And who would be awaiting us as the first boss in Freehold? None other than Skycap’n Kragg and his trusty mount, Sharkbait, making him the first character to make the leap from Hearthstone to WoW.

But he wouldn’t be the last. As players explored Zandalar and Kul’Tiras, they encountered the Tortollans, a turtle like race introduced in the Journey to Un’Goro card set. Later, in Mechagon, players found Elise Starseeker, Reno Jackson, Sir Finley Mrrgglton, and Brann Bronzebeard better known to Hearthstone player as the League of Explorers. Brann was already a character in WoW and part of the Explorer’s League, but the other three are original Hearthstone characters.

It was also Hearthstone which provided players with their first glance at what N’Zoth looked like. N’Zoth is a rather large part of Patch 8.3 and perhaps beyond. It got me thinking, what original Hearthstone characters, not currently in WoW, need to make the leap in Patch 8.3 or beyond. 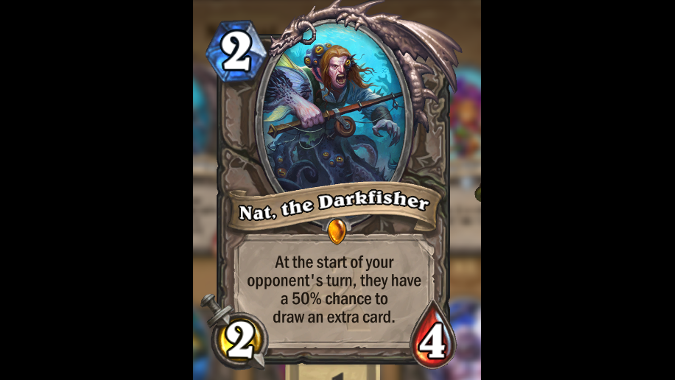 Our old friend Nat Pagle got himself voided up and became Nat, the Darkfisher. Hogger, the Gnoll terror fresh in the minds of WoW Classic Alliance players, became Hogger, Doom of Elwynn. King Mukla, the giant Skymane gorilla found on Jaguero Isle in The Cape of Stranglethorn became Mukla, Tyrant of the Vale. Each of these characters could be featured in a Horrific Vision or as a World Quest type of mob.

If the Old Gods are back, certainly their favorite servitors the N’raqi — commonly known as the Faceless Ones or the Faceless — will join them. Shifter Zerus is one of the few named Faceless in Hearthstone and could soon join WoW. 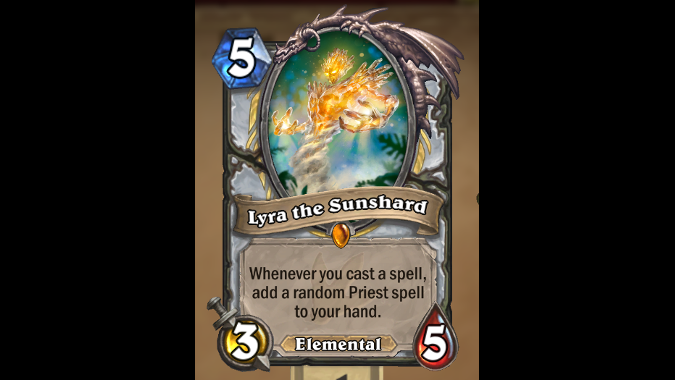 Light in the Darkness

The Journey to Un’Goro card set, which has a heavy influence on the current Saviors of Uldum set, introduced an original character called Lyra the Sunshard. She appears as a powerful Elemental. Her coloring indicates she is associated with the sun — or the Light. While we lacked the vocabulary at the time of her introduction in Hearthstone, looking at the card now, most players would call her a Lightforged Elemental. 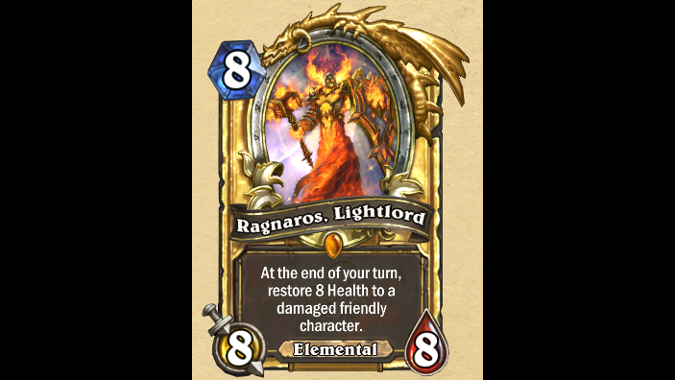 And she’s not the only Lightforged Elemental unique to Hearthstone. WOG also introduced one uncorrupted character, Ragnaros, Lightlord. This Lightforged version of the Elemental Lord would oppose the Old Gods once again and tell us to “Live, Insect.”

And it just so happens, there’s been a recent mention of Ragnaros in WoW lore.

Spoilers for the Dark Iron Dwarf recruitment scenario to follow.

During the Alliance recruitment of the Dark Iron Dwarves, players witness an exchange between High Justice Grimstone and Anvil-Thane Thurgaden.  Grimstone is referring to himself as a “Herald”.

High Justice: Rightful leader? There’s nae fire in Moira’s veins. Our rightful leader is the true Lord o’ Flame, not some Bronzebeard whelp… nor a pretender to his throne.
Anvil-Thane: Ragnaros?! Ye mean tae bring that tyrant back? When the Sorcerer-Thane tried that, he–
High Justice: While Thaurissan did nae lack fer vision, his folly was tryin’ tae control the Firelord. Instead, we must serve him in all things.

Ragnaros and Lyra aren’t the only Lightforged being who could oppose the Old Gods. Zerek, Master Cloner, is an Ethereal introduced in The Boomsday Project set. The Ethereals are normally associated with the Void, but Zerek’s card art shows him as Lightforged. Perhaps he could fill a similar role to one Lothraxion played in Legion. Zerek’s effect is to resummon himself which would make for an interesting boss fight in a Mythic Plus dungeon. 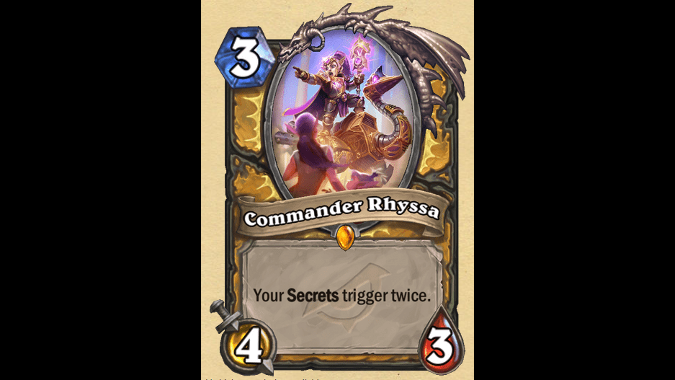 The Light will also need new champions. Gnomes can already be Priests. They can already be Warriors. What is a paladin if not a Priest who took up arms like a Warrior? Why can’t Gnomes be Paladins? Well, according the Hearthstone, they can. In the Rise of Shadows card set, the Paladin Legendary card was Commander Rhyssa who appears to be a gnome paladin complete with a Lightforged Mechanostrider. Make it so, WoW developers! 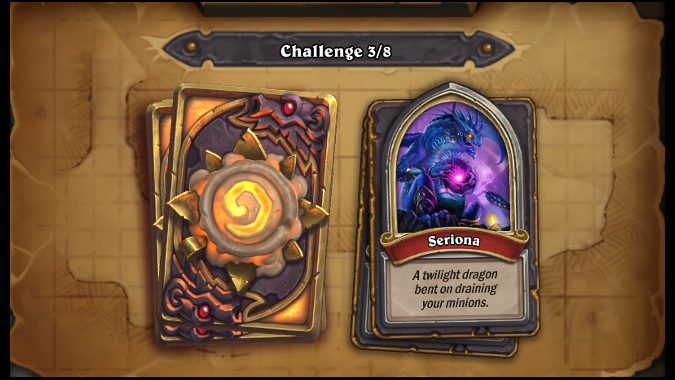 Here, there be dragon… isles?

Much speculation around the next expansion centers around a possible trip to the Dragon Isles. Two original Hearthstone characters would be a good fit.

Kobolds and Catacombs introduced a Twilight Dragon named Seriona. One of the last Twilight Dragons, Seriona wishes to bring the flight back from extinction. This is a story line I think we’d see as part of a Dragon Isles themed expansion or patch. Her Hero Power is called Fading Light which could tie into darkness created by N’Zoth and Nyoltha.

Kobolds and Catacombs also introduced Dragoncaller Alanna. As you might surmise from the her name, her Hearthstone effect to summon dragons onto the board in response to large spells the player has cast. I could see her playing a minor role in a Dragon Isles expansion or patch similar to the League of Explorers in Mechagon. Her effect would make for an interesting boss mechanic so I could also see her getting the Skycap’n Kragg treatment and becoming a Mythic Plus boss.

These are just a few of the characters unique to Hearthstone that we could be seeing in WoW soon. You can view the full list here. Which characters would you most like to see make the transition from card game to the MMO?

Blizzard Watch is made possible by people like you.
Please consider supporting our Patreon!
Filed Under: New Wow Expansion, Wild Speculation
Advertisement