It can be hard to find good Hearthstone decks, particularly when the cards keep changing out from under you. Within days of the release of the recent Descent of Dragons expansion, the developers announced nerfs to the set. The majority of nerfs targeted to the Shaman class, giving a big shake-up to a meta that had only just started to develop.

Now that we’ve had a few weeks to examine the effects, we can say the nerfs worked. The high-powered Galakrond Shaman deck is now more reasonable, and there are a host of other good decks representing a variety of play styles from the super aggressive to the more board control-oriented.

Let’s take a look at the best performing decks in Hearthstone right now, and the cards you’ll need to build them.

Do you have these three key Legendary cards?

For each deck, I’ll discuss replacements for expensive Epic and Legendary cards, but there are three cards you’ll see in these decklists again and again: Kronx Dragonhoof, Zilliax, and Leeroy Jenkins. So before we dive into the decks, let’s talk about these crucial cards.

Kronx Dragonhoof is one of the main Galakrond support cards, and around 40% of the decks on this list are Galakrond-based. Depending on whether Galakrond is on the board, Kronx will draw Galakrond or unleash one of his four powerful Devastation effects.

While I won’t call him irreplaceable, if you have the Arcane Dust, go ahead and craft him. If you don’t have the resources, replace him with any big threat you have.

For the past year, Zilliax has been one of the best Legendary cards you could craft. His unique combination of Magnetic, Lifesteal, Divine Shield, and Rush proved a powerful addition to almost any deck. The problem with Zilliax now is shelf life. Zilliax entered the game during the Boomsday Project expansion which will be rotating out of Standard when the next expansion releases, likely in  April.

If you haven’t crafted him yet, you have two options: craft him today and be aware that you only have him for a couple of months, or replace him with another card. Decide which aspect of Zillax you most need in your deck — Lifesteal, Divine Shield, Rush, or Magnetic — and pick a card that provides it.

Leeroy Jenkins is the classic aggressive deck finishing play. As part of the Classic set, he’s been around since the inception of Hearthstone — and he’s a card I strongly recommend you add to your collection. Unlike Zilliax, Leeroy won’t be rotating out unless he’s tagged for the Hall of Fame in which case you’ll get a full dust refund and get to keep the card for Wild play.

If you simply don’t have the resources to craft Leeroy, another minion with Charge is your best bet. Consider Kor’kron Elite for Warrior players, while Argent Commander and Reckless Rocketeer are good Neutral options.

With that bit of housekeeping done, let’s get to the decks. 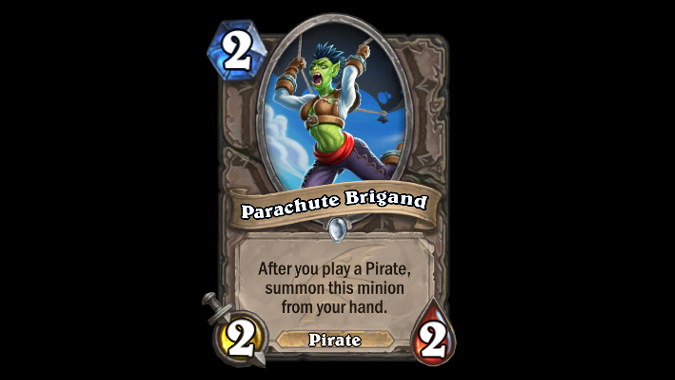 The best Descent of Dragons decks

Pirate Warrior aims to grab the board from turn one and never let up. The deck is full of Pirates to pull free Parachute Brigands down to the board and weapons to discount your Dread Corsairs — all while your Sky Barge reins down death from above. Southsea Deckhand and Leeroy Jenkins provide face damage straight from your hand. Sky Raider, Ancharr, and Livewire Lance provide a level of value generation not normally seen in such an aggressive deck, which looks to end the game before turn seven. 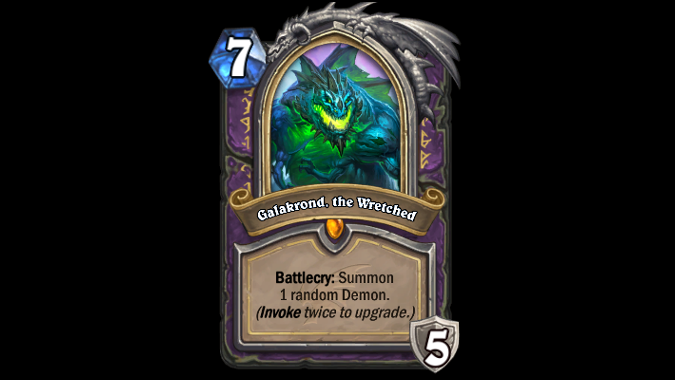 This deck plays your classic Zoo or flood game plan, where you fill the board the minions and dare your opponent to clear them. If they do, flood it again. Slam down your Mountain Giants for a pittance of mana. Your hero power provides cards if you’re running low. Scarab Egg is an ideal target for your Grim Rally or Evil Genius, but if Grim Rally can give you lethal, any minion is fair game. Like most aggressive decks, you should be closing out the game before turn 8, though Galakrond and Kronx give you a little more staying power.

Replacements: Any card draw minion could sub in for Veiled Worshiper, but Acolyte of Pain is your best chance at getting three cards. 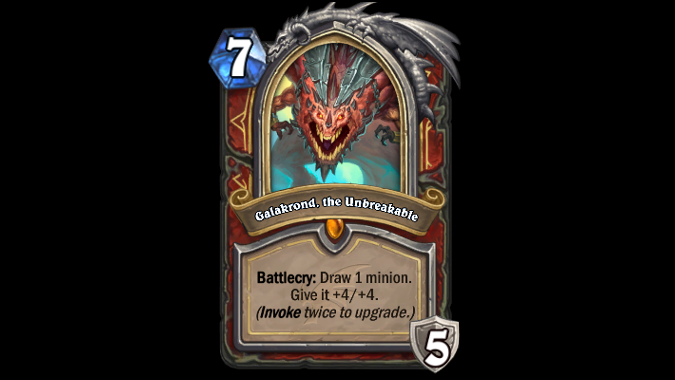 With the armor and removal options in this deck, you might think it’s more a Control Warrior, but Galakrond tilts you more aggressive. The dream is to have Galakrond’s Battlecry hit Leeroy Jenkins. You normally don’t see much armor gain in an aggressive Warrior deck, but with all the weapons and the attack from Invoke, you’ll find yourself smashing your face into those pesky Taunt minions often enough to appreciate it. 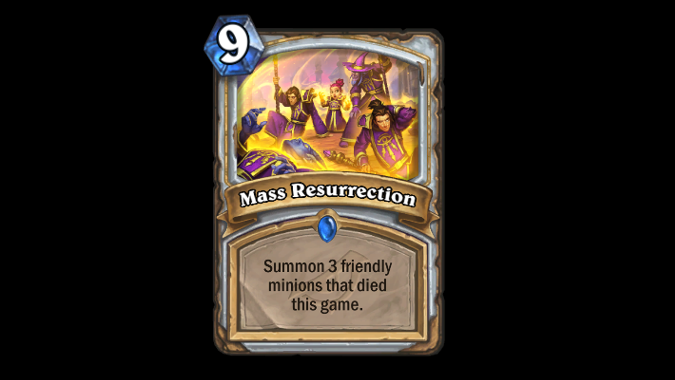 This is a polarizing deck that’s similar to the popular Big Priest from the Wild format. The idea is to put high-value minions on the board and resurrect them over and over again. The problem is many of these minions have a significant mana cost ± 5 or more — which gives this deck a slow start. You’ll have to use your single target removal and AOE spells to keep from getting too far behind while you grow your mana pool. Once you can start dropping Convincing Infiltrators and Khartut Defenders, you can stabilize and start outvaluing your opponent. It’s paramount to remember what has died before playing your Psychopomp so you can get a good minion. 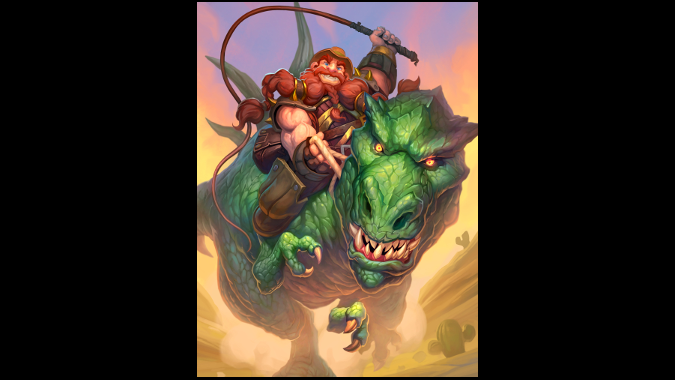 This deck uses Secrets to disrupt your opponent’s gameplan. It has a solid curve, assuming you get the cards you need and can contest the board while setting up its big plays like Zul’jin and Dinotamer Brann. As a Highlander deck (which only has one copy of each card), sometimes you’re going to get an awkward curve or not get the card you need. For instance, you need AOE, but Explosive Trap won’t show up, so you’ll need to have alternate strategies in hand. Zephyrs can sometimes get you out of a bind. The deck has little healing, leaving it vulnerable to aggressive decks. Still, when your Secrets line up, you can control the game and frustrate your opponent.

Replacements: You can try to get lucky and discover some of the missing cards. Primordial Explorer can find Veranus or Dragonqueen Alexstraza. Another Charge minion like Reckless Rocketeer could sub for Brann. Siamat is most often used for removal with Rush. I’d suggest a Vilebrood Skitterer. Zephyrs is such a powerful effect that I’d recommend crafting him if you like Highlander decks. Zul’jin is another hard to replace card. For either, look for big threats like Twin Tyrant or Pit Crocolisk. 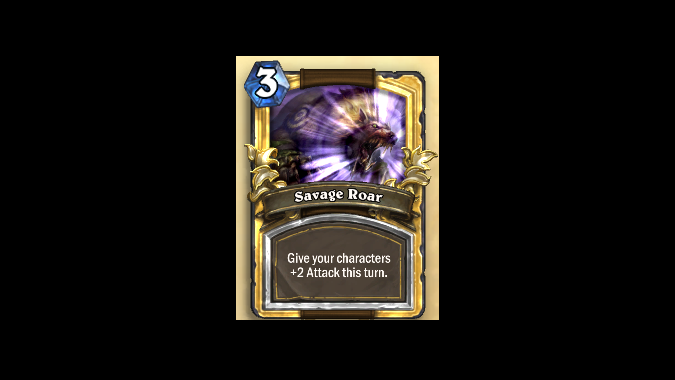 Token Druid has been a staple of the Hearthstone meta for a long time, and though the individual cards change from expansion to expansion, the general game plan remains the same. You want to fill the board over and over, and eventually, you’ll get a turn where your opponent can’t clear your board. That’s when you want to do some quick math and see if a double Savage Roar combo will give you lethal. Rinse and repeat until your token army can take your opponent down. 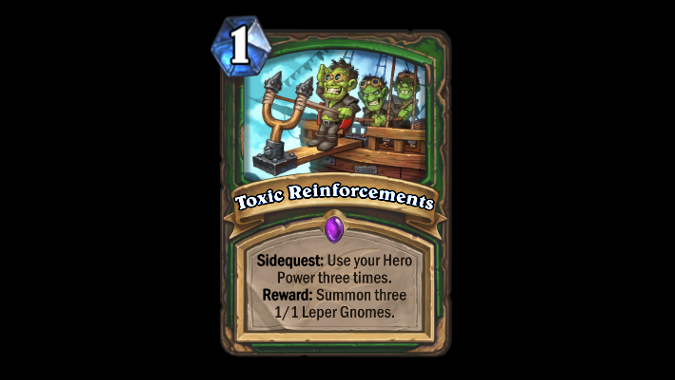 Rexxar smash! This is a straightforward and relatively inexpensive aggressive deck. Play your low-cost minions and when in doubt, hit the face. You’ll usually have mana left over for your Hero Power for even more damage. Every turn needs to be about putting as much damage into your opponent as possible. You can overwhelm even a deck with good life gain — whether via Armor or healing — with this deck’s fast, aggressive play.

Replacements: Toxic Reinfocements provides 6 additional face damage. If you need to replace it, try Marked Shot. It can clear a minion and maybe you’ll find another Kill Command. 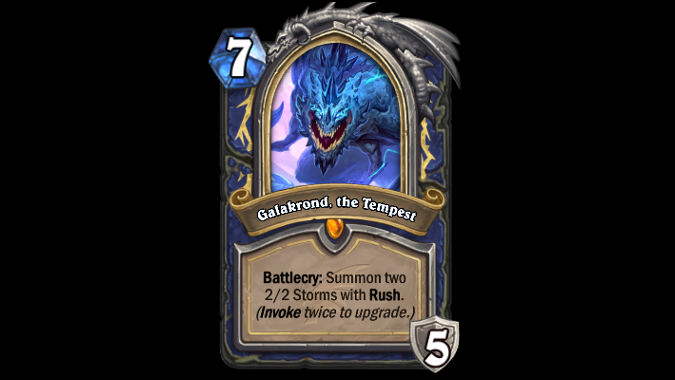 The nerfs knocked this deck down a little bit, but it still possesses some powerful swing plays and can be successful. This is a no Quest version of the deck. You want to mulligan for your generators like E.V.I.L. Totem and Sludge Slurper along with early Invoke options like Devoted Maniac and Invocation of Frost. Between the Lackeys and Invoke, this deck can contest the board throughout the early game. Even after the nerf, Mogu Fleshshaper can still get discounted down to a reasonable mana cost. You don’t want to play Galakrond until he’s fully empowered. It’s a great swing turn that many decks won’t recover from. Shudderwok makes a second big swing on the board.

Replacements: Barista and Shudderwock provide unique effects that you won’t exactly be able to replace. If you don’t have them, try swapping in big threats with Battlecries like Twin Tyrant or Pit Crocolisk. 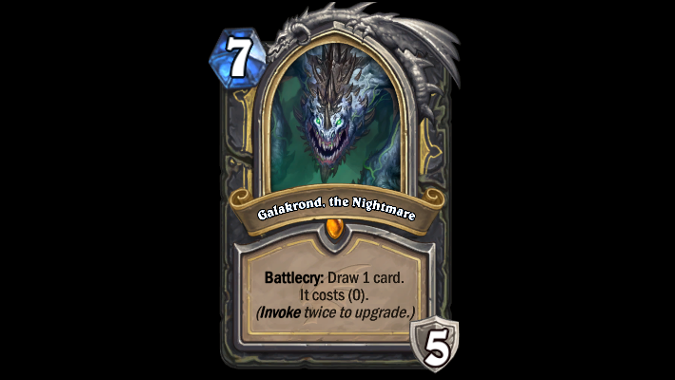 This deck has a little bit of everything. There are small minions for the early game and big threats for the late game — which you might be playing for 0 mana thanks to Galakrond. The trick is hitting the right curve: you want to mulligan hard for your early game cards. Mechanical Whelp is triggered multiple times with cards like Necrium Apothecary and Necrium Blade. Here again, you need activators in hand to get the maximum value from Mechanical Whelp. One neat trick is to use Flik Shyshiv on your own Zephrys the Great after you play him, which will destroy your opponent’s Zephrys.

This deck has a wide range of outcomes. When it works, you’ll outvalue almost any opponent. When it doesn’t work, you’re stuck with awkward hands and suboptimal plays.

This list is far from exhaustive and will change as the expansion’s meta continues to develop. You can head over to HSReplay.net or Hearthstone Top Decks any time to see the latest snapshot of the meta and find more decks to play.

Have you’ve found a deck you love or one you are dominating the ladder with? Leave it in the comments and I might play it on my weekly stream, Tuesday nights on the Blizzard Watch Channel.