Over the last week, a long-time discussion in the Overwatch community was reignited by rumors of a “big update” coming to the game. The leading theory quickly became the system that many players and fans of Overwatch League have wanted for a long time: hero bans.

Despite lots of discussion and theorizing about how the system would work on Twitch, Reddit, and Twitter, Game Director Jeff Kaplan stepped in to confirm that the upcoming change won’t be hero bans, but something else entirely.

Why does Overwatch need hero bans?

To understand why hero bans are such a hotly-discussed topic in the Overwatch community, you need to understand what they are. In competitive multiplayer games like MOBAs or fighting games, it’s common to see ban systems in place to prevent players from using certain characters or tactics that the community or the developer themselves deems unfair. In League of Legends, you can vote to ban certain champions from being played by either team before the match begins. Systems like these put the variables of the game in the players’ hands, allowing them to dictate what sorts of strategies are allowed with what’s left over.

The thought is that in a game like Overwatch, hero bans will force players to play team compositions outside of the meta picks, or the strongest perceived heroes at any given moment. If Orisa gets banned, that team might be forced to play a dive composition with a D.Va and a Winston, while in the next game maybe Baptiste gets banned and the team has to play around having an Ana instead. Many players believe this rotating selection of heroes that aren’t allowed in games will keep the meta fresh and dissuade people from only being able to play one hero — otherwise known as “one-tricking.”

Kaplan’s post on the official forums acknowledged these complaints. Overwatch players are tired of the meta, they’re tired of heroes they feel are overpowered, and they’re tired of playing against certain heroes all of the time. But Kaplan believes hero bans won’t fix this problem. As in other games — like League of Legends — there eventually becomes a “ban meta” where banning the wrong heroes is itself susceptible to the same frustration that adhering to it is in the first place. “If the problem we are trying to solve is that the meta needs to change more,” Kaplan wrote, “hero bans might actually make the problem worse, not better.”

Kaplan said the team has a solution to keep the meta moving at a faster pace that he’ll announce via a developer update video next week.

The rest of his post goes into his philosophy on why hero bans don’t work in a game like Overwatch. Kaplan would prefer more frequent balance changes to the game versus fixing by letting players get rid of certain heroes. He also believes that in a PVP game, you shouldn’t have control over what the enemy decides to do. “The challenge is overcoming the enemy team with teamwork, ingenuity and skill,” he said. When it comes to one-tricking, Kaplan said the team doesn’t “explicitly prevent” you from playing a single hero, but they also don’t encourage it. Lastly, he mentions that hero bans would go against the team’s efforts to make queue times as fast as possible. A ban phase at the beginning of every match would lengthen the time of every game and therefore how long it takes for anyone to get into one — something Overwatch has historically been pretty good at. 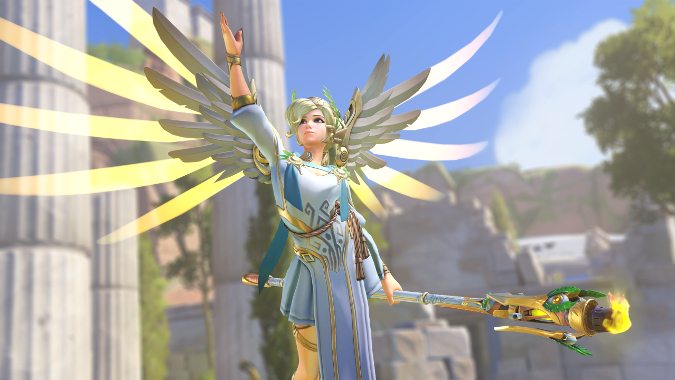 Hero bans erase what Overwatch was supposed to be about

Kaplan’s comments are surprisingly candid and hopeful for what kind of game Blizzard wants Overwatch to be. Even though it hasn’t seemed like this is the kind of ideology that goes behind the recent, misguided balance changes, it’s still reassuring to see that he still values the parts of the game that made it so different from every other shooter out there. Overwatch was supposed to be a game where you play as your favorite heroes and learn how to defeat whatever the other team threw at you. It’s not a MOBA where you’re locked into heroes for the entire game. You were greatly encouraged to play other heroes or at least swap to them if something was particularly annoying to your team.

Hero bans erase the game’s spontaneity and strategy and force you into playing not what you want, but what others will let you. There’s still a spark of possibility whenever you get the hero select screen and are offered a full set of heroes to play — even when there’s clearly good and bad picks. To rob players of that choice, robs the game of its ability to create a joyful, multiplayer experience. Hero bans encourage simply competitive play, where being better and winning are the only goals.

That might be great for Overwatch League or Top 500 players, but it would ruin what makes Overwatch still one of the most compelling, accessible team shooters to date. Many of us play to be one of the game’s diverse set of heroes, to play with unique mechanics that match our playstyles, and to enjoy a competitive game that isn’t governed by a kill/death ratio. We play to have fun and improve at our own pace. Hero bans are the antithesis to that, and have no place in Overwatch.