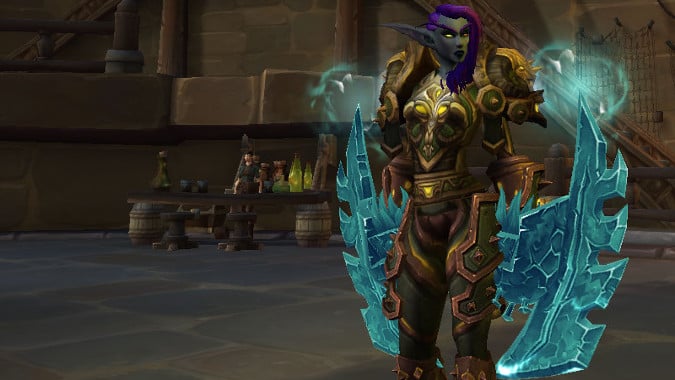 Since the Shadowlands pre-patch I’ve been working on my fist weapon transmogs, farming up The Bladefist from Highmaul, Fist of the Deity from Gundrak, and the Abomination’s Knuckles from ICC. I’m annoyed that I didn’t already have the Abom Knucks, cause I used to tank ICC with them back in the day. But apparently I forgot to keep them, which is irritating because I kept literally everything else. Luckily, they dropped for me.

This is the Queue. I’m filling in for Liz. Let’s do this.

It’s Hallow-s End again! Now that Shadowlands is a thing, either remind me about the story of the Horseman or come up with your best idea of why HH didn’t get judged by the arbiter and go to one of the realms.

The Headless Horseman is Sir Thomas Thomson, formerly a Paladin of the Silver Hand who was present at Stratholme when Arthas ordered the city purged. Thomas agreed with Uther and refused to take part in the culling, and he witnessed the destruction of Lordaeron by the Scourge, becoming desperate enough that he sent his family to Kalimdor to follow Jaina while he stayed in the former nation and, following Arthas’ murder of Uther and his own father, Sir Thomas eventually became a member of the Scarlet Crusade under Saidan Dathrohan.

Unfortunately for Sir Thomas, Saidan Dathrohan was actually the Dreadlord Balnazzar in disguise. After arranging for Sir Thomas to accompany him to a local village, he manipulated the Paladin into believing that everyone in the village had the plague of undeath. Reliving Arthas’ actions at Stratholme, this time it was Sir Thomas who felt he had to purge the infected… and it was Sir Thomas who ended up killing his own family, who were taking refuge in that village, unable to escape to Kalimdor. He murdered them and only realized it as the sword stroke killed his daughter.

Broken by this, Sir Thomas believed he was living in a world utterly tainted by the plague, and on that Hallow’s End he went on a murderous rampage that only ended after his fellow Scarlet Crusaders decapitated him. However, Balnazzar is nothing if not an experimenter, and so he took Sir Thomas’ body and used his own fel corrupted blood to curse him, ripping him from the grave as the Headless Horseman.

I have seen alot of hate for the new Sprite Darter’s Wings transmog set, even though you are getting it for free on top of your $24 yearly savings if you have the 6-month sub, saving you $49 if you just have the sub and don’t buy it separately for $25. So with that in mind how do you feel about the mounts and now transmog coming out with the 6-month subs.

I mean, I’m subbed for like three years at this point so I’m not getting any of it, but I don’t mind it. I think the Sprite Darter outfit is weird, but it’s no weirder than the Wendigo  Woolies or the Murloc costume, and I mean, I remember when they gave us stuff like free Diablo 3 with our long term sub, so I think this is pretty much along the same lines as that.

I don’t think that I’ve ever been moved by any of these offers enough to actually pay for another six months when I’m seriously subbed until 2023, but I’m not opposed to it, either. I kind of wish I’d gotten the flying rat, he was cute.

Halloween Q’s:
How many days before Halloween do you carve your pumpkin, or is it an “on-the-day” activity?
Also, are you planning to give out candy this year, and if so, how? Pulleys? Baggies? Something else?

We probably won’t carve a punpkin this year and I’m personally not too excited about a bunch of strangers coming to my house and breathing on me and my family, so we probably won’t do the candy thing this year.

I MANAGE TO REMEMBER, MISTER RIK, BUT IT’S ALWAYS A PITA

Does anybody else have the bad habit of forgetting to turn in your Champions of Azeroth emissary after completing the WQs?

It’s because the turn-in is all the way out in Silithus and before Essences and such there was practically no reason to go there.

TELWAR CONFUSES ME WITH A QUESTION

On a scale of 1-10, how lazy is porting from the dungeon full of mantids back to the Shrine?

Because I just did that.

I’m not ashamed, either.

Are we talking about after the Vale invasion? Because I always take the portal that spawns after I kill the boss. Why wouldn’t you? I’m not running all the way back after I get that giant faceless one jerk deaded. They put a portal right there, of course I’m going to take it and port back.

GALDWYNN, I THINK THIS WAS TRUE IN THE WORLD WE NO LONGER LIVE IN

Blizz really needs to announce the release date of Shadowlands in the next couple weeks if they want to squeeze it in by the end of the year. Time is running short.

If it was still 2019 and we lived in the world before COVID, I’d agree. But frankly, this year I’ve seen all sort of norms get destroyed. If you’d told me Blizzard would announce a launch date for Shadowlands while working on the expansion in a completely different, work from home manner, and then that they would push the date back to an unannounced time I would not have believed it.

But then 2020 happened. This year, all sorts of strange things I never expected have happened. I don’t know what the future entails, but I know that I no longer have even the slightest of precedents to go on, and that Blizzard could well just announce this at any time. They could announce it tomorrow for a Christmas release and while I would be surprised, I wouldn’t be THAT surprised.

What race has the best roar when heroic leaping?

MUSEDMOOSE THINKS THE JAILER SHOULD BREAK OUT OF THE MAW

Lore Q4tQ: do you think the Jailer is going to escape the Maw during Shadowlands? I had the thought that he could have gained a ridiculous amount of anima from when we killed Argus’s world soul and therefore made consuming Azeroth’s world soul his goal. And I think a raid where we descend into the depths of the planet to stop the Jailer would be pretty cool.

Based on the stuff Bolvar says to REDACTED, it’s possible that the Jailer will find a way out of the Maw in an surreptitious way, let’s say. He’s testing the people brought from Azeroth by Sylvanas, but he won’t say for what. Perhaps they hold the key to his plans for Azeroth.

That’s all I’ll say for now. Think about it, though. The Jailer sees your player character escape the Maw. Perhaps it gives him an idea.

ROXXII THE BELOVED, BECAUSE I MISSED THIS ONE YESTERDAY AND I FEEL BAD

Q4TQ: Hearthstone reveal: What are you most excited about?

Well, as much as I don’t play a ton of Hearthstone, I’d have to say either the fact that they’re doing the progression system from Runeterra, or just the whole idea of an expansion that focuses on the weird connection between the Old Gods and the Darkmoon Faire. I hope some of that comes to WoW someday.

Okay, that’s the Queue for today. Take it easy, and I’ll see y’all next week.