Heroes of the Storm goes hog wild with their newest hero: Hogger 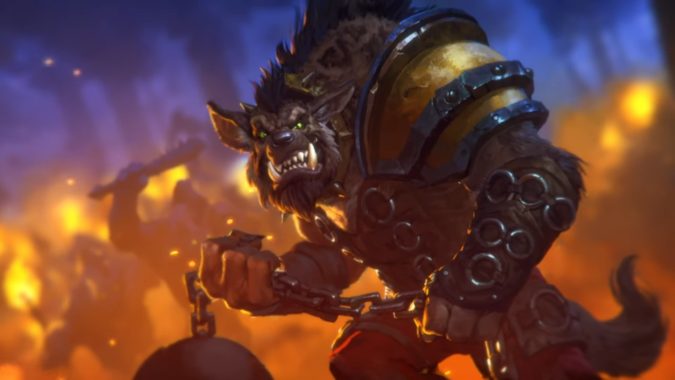 Hogger — King of the Riverpaw Gnolls and scourge of low-level Alliance players — is coming to Heroes of the Storm as their 90th hero! He’s a character with a long and storied history, so it makes sense for Heroes to add him. He was one of the first “Elite” enemies that Humans would run into when they were first starting their journey in World of Warcraft, and prior to the Cataclysm zone revamp was tougher than the average enemy. More than a few players have met their end at his axe and unforgettable cackling laugh.

After the world got destroyed he is no longer killed by players out leveling. Instead he’s captured and put into the Stockades dungeon where you can finally end his Gnollish menace for good. But now he’ll be terrorizing a whole new batch of players as he joins the Nexus as a fearsome bruiser.

I’m really excited to get my paws on Hogger. He looks like he’s going to fit right into my favored playstyle right now — get in and cause as much chaos as possible, while having the health pool to make some mistakes and not get unduly punished for them. As an added bonus he won’t use Mana — instead, he’ll build Rage as he attacks enemies. The more Rage he has the faster his cooldowns will become active. With the health return that he can get from the meat he keeps in his Loot Hoards, he’ll be able to sustain himself for a long time in the offlanes.

Hogger’s playstyle, and how to start countering him

I think the ability that I love the most is that he gets to toss out loot boxes to block terrain. Finally, we’ll be able to use them for more than just getting some new skins and mounts! Hog Wild looks like an absurdly fun ability and I can’t wait to make Tasmanian Devil noises the entire time that I use it.

Comparing him to my other favorite Bruiser, Yrel, Hogger looks like he’ll be able to cause almost as much havoc. He just won’t have the targeted mobility that she does from Avenging Wrath. At least until he gets Hoardapult at level ten, anyway. Then he’ll be nearly unstoppable! Launch yourself into combat, throw some dynamite, and your Staggering Throw to knock enemies around a little, and keep yourself full of health by snacking on some delicious meat.

We’ve been getting a lot of these high health characters recently between Deathwing, Mei, and the reworks to Gazlowe and D.Va, so I’m definitely spoiled for choice here. It does mean that we’ll continue to see Leoric, Tychus, and Malthael continue to be very favorable counters though. So if you’re worried about a Gnoll causing havoc in your games it might not be a bad idea to brush up on one or all of them.

Hogger has been a long time coming. Way back in 2013 when Heroes was just launching; Samwise Didier mentioned that he’d love to get Hogger into the game. It only took them seven years for that to happen! I am still surprised that we didn’t wind up getting a new Ranged Assassin — it’s been so long since one of them was added. There’s always the next hero though! I’ll cross my fingers extra hard for Pharah.