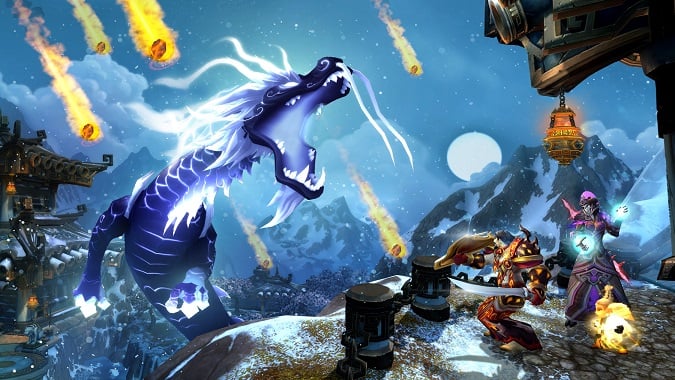 With the tantalizing possibility of the Mage Tower returning during Legion Timewalking, I immediately started thinkng about other gameplay elements that were once big and which fell out of favor in later World of Warcraft expansions. Like Mists of Pandaria scenarios and Challenge Mode dungeons — a way for solo DPS players to get together in a group without having to switch specs, and the ancestor of modern Mythic+ but with special cosmetic rewards instead. Or the Battle for the Undercity event from Wrath of the Lich King, which is really sadly lost now, or even the Darkshore event from the pre-expansion between Legion and Battle for Azeroth, so players could grapple with and understand why some of us are still upset about it.

I mean, it’s only been an expansion since Warfronts, but it feels to me like that was a pretty solid idea that just came and went — it might be nice to get to run those again during the eventual Battle for Azeroth Timewalking, or we could go all the way back to original WoW and bring back the Silithus events. Imagine doing that all over again during a vanilla WoW Timewalking week, which also could bring back the original forms of dungeons like Scarlet Monastery or Scholomance or Sunken Temple?

That’s just what comes to mind for me when I think about all the content we could see come back. Don’t let the Mage Tower be the last, people. What would you bring back during a Timewalking week? Would you want to see the Broken Shore actually become relevant again during a week? Maybe the pre-expansion demon invasions that led into Legion? Cataclysm’s Elemental Invasions? Older raids? More dungeons? Original Alterac Valley? Share with us whatever you miss from the game that we’ve seen fall out of use as time has gone by and new content has replaced the old.

Blizzard Watch is made possible by people like you.
Please consider supporting our Patreon!
Filed Under: Mage Tower, Older Content, Timewalking
Advertisement