The lore behind the the Blackwing Lair raid

Blackrock Mountain was home to a lot of end-game content during vanilla-era World of Warcraft, were everyone would gather to run Blackrock Depths, Blackrock Spire, Molten Core, and starting in patch 1.6.0, Blackwing Lair. Beyond those in-game memories of standing around waiting for your UBRS group to form, there’s a lot of Warcraft history here. By the start of WoW, Emperor Dagran Thaurissan and the Dark Iron Dwarves had settled in the deepest caverns of Blackrock Depths, where they served the Elemental Lord Ragnaros, who was preparing to reemerge from the Molten Core — had we not awakened him too soon — to take over Azeroth. But one of vanilla’s most memorable raids was Blackwing Lair, located at the very top of Blackrock mountain.

From his perch on the mountaintop, Nefarian leads the black dragonflight in Blackrock Spire and Blackwing Lair, and he is also planning to take over Azeroth. This sets Nefarian and Ragnaros against each other, one ruling over the peak of the mountain and the other laying claim to the caverns below. (What would happen if Ragnaros and the leader of the black dragonflight teamed up? The results could be cataclysmic… but that won’t come until much later.)

There are plenty of threats to face in Blackrock Mountain, and adventurers first find their way to Blackrock Depths, perhaps the longest dungeon in World of Warcraft, a labyrinthine space with 20 bosses, many of which were optional. Many parties never even reached where Emperor Dagran Thaurissan was defeated. His wife Moira took charge of the Dark Irons, and plotted to take out her enemies in the mountain, including the Black Dragonflight, which had aligned with the Dark Horde in Upper Blackrock Spire. Chronicle Volume 3 gives us a canonical take on this tale that’s a little different than the in-game story: Moira sent word to Durotar, and Horde champions were sent to defeat Nefarian and anything else they found in his lair. If you play Alliance and saw Nefarian’s head hung in Stormwind, the official story says that never happened. The Horde that slayed him and hung his head in Orgrimmar.

But adventures couldn’t just step in to Blackwing Lair, kill a big dragon and then call it a day. Blackwing Lair is full of threats to fight through, so let’s take a look at everything we’ll encounter inside, where it came from, and why our heroes even care enough to fight through all of these dragons 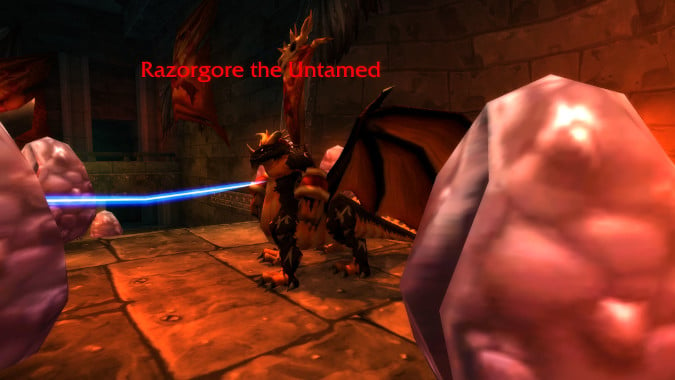 Upon entering Blackwing Lair, the first room is packed with black dragon eggs. It doesn’t seem very strategic to put all the eggs right in the entrance, because new arrivals might immediately destroy them. Fortunately for the eggs, mere mortals cannot harm them… but unfortunately for the eggs, there’s an Orb of Domination in the room — which is being used by Grethok the Controller when you first enter — that allows you to control Razorgore the Untamed, who can destroy the eggs.

Once all the eggs are smashed, Razorgore can be defeated. Surely that’s all the black dragonflight’s eggs, and Nefarian doesn’t have a brother out there who will be uncorrupted and play a bigger part one day. 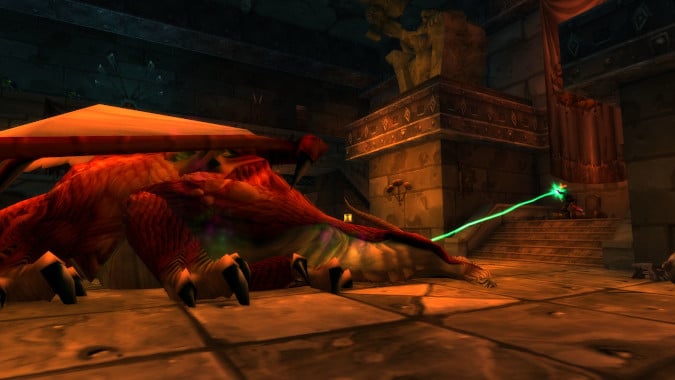 Vaelastrasz goes from friend to foe

Now we finally see Nefarian, in human form, channeling a spell onto a red dragon: this is Vaelastrasz, who’s been corrupted.

But who is Vaelastrasz? You’ve probably met him before, even though you may not remember him. To enter Upper Blackrock Spire yo needed a Seal of Ascension, a ring covered with draconic runes. You started with an Unadorned Seal of Ascension, which Vaelan — alias Vaelastrasz — helped you forge it into a finished seal. This was a lengthy process: it required gemstones representing leadership around Blackrock Mountain, and then had to be forged in the flames of the black dragonflight. None of the black dragons would help, so Vaelan offered an Orb of Draconic Energy which let you control a black dragon in Dustwallow Marsh to force him to use his breath on the ring. With the ring in hand, players could venture into Upper Blackrock Spire to take on the leader of the Dark Horde — and during the final battle against Rend Blackhand, players used a special ability on the seal to summon Vaelastrasz to fight beside them.

Vaelastrasz intended to make sure that Nefarian and the black dragonflight fell. After aiding the adventurer, and feeling restless, he tracked down Nefarian on his own and ventured forth into Blackwing Lair — but Nefarian was too much for him. He consumed Vaelastrasz’s energy, and turned him against his former allies.

Vaelastrasz had another secret: he was carrying the Red Scepter Shard needed for the Scepter of Shifting Sands in order to unlock Ahn’qiraj, the game’s next raid. Nefarian had the foresight to take it from him, so future adventurers would need to fight all the way through Blackwing Lair to reclaim it. 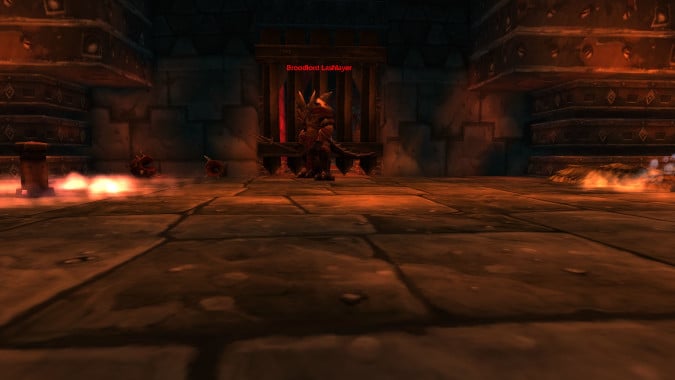 Though we’ve just seen two bosses with interesting stories and mechanics, there are several bosses in the middle that have no real story. They’re just part of the black dragonflight, here to guard the lair and stop (or at least slow down) intruders.

The first of that lot is Broodlord Lashlayer, a Drakonid who guards the rooms that follow. He’s surrounded by Dragonspawn and whelps, making a gauntlet for players to fight through, all while suppression devices slowed intruders’ movement speed. Lashlayer himself wasn’t a particularly difficult boss, but the gauntlet could be a real challenge.

Further in, you’ll find the Crimson Laboratories, where Goblins are hard at work under their Orcish supervisers and Drakonid guards. Three bosses guard this mysterious workshop: the drakes Firemaw, Ebonroc, and Flamegor, who fly throughout the lab area. 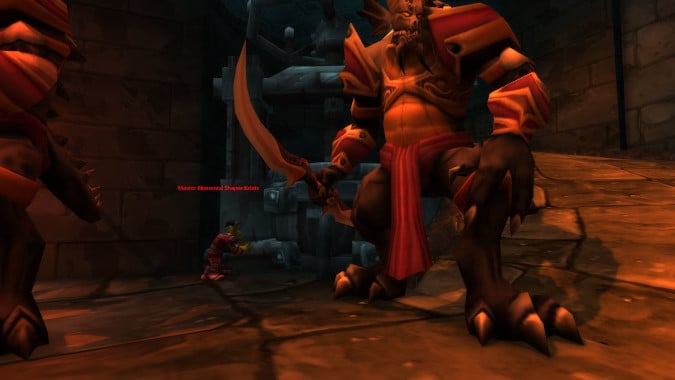 In the back of the lab is Master Elemental Shaper Krixix, a Goblin who won’t tell you much about himself. However, did somebody say Thunderfury, Blessed Blade of the Windseeker? If you have one of the parts for the sword, a High Elf named Earthcaller Franzahl in Darkwhisper Gorge will have told you about his former student, Krixix: the only person he knew who could create Elementium. Krixix was trying to contact the Old Gods, and then something sprung up from the ground and pulled him into a fissure. Franzahl doesn’t know what happened to him and thinks he’s probably dead — but if not, he certainly wouldn’t be interested in helping any adventurers. In the olden days of vanilla, a Priest had to mind control Krixix so he would teach a miner Smelt Elementium. In modern retail, he drops a book that teaches the ability. 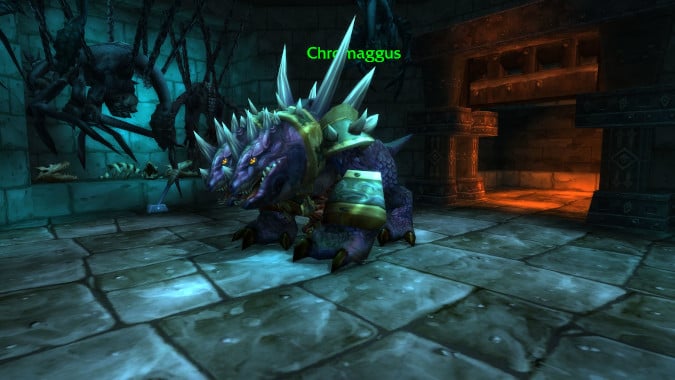 What is Nefarian’s master plan?

Nefarian seems to be setting up for something in Blackwing Lair… but what? What has he been doing that requires locking himself away in a mountain with an expansive laboratory? In the first room there were eggs: hatching and raising new whelps were a part of the plan. The suppression room is full of dragon whelps, and not just black dragon whelps: they come from all five dragon flights. But as you progress through the lair, you’ll see a growing number of dead dragons, either the end result of experiments or a source of materials to work with.

The Chromatic dragonflight! That is Nefarian’s goal: to create dragons that aren’t black, blue, green, red, or bronze, but an all-powerful combination of all five.

If the lab and the different flights of whelps, and some of the dead dragons littered around the lair are the ingredients to the Chromatic experiments that Nefarian is doing, then Chromaggus is the end result. Chromaggus has the abilities of all five dragonflights, a dragon-like appearance, and originally was a type of dragonkin — specifically a Drakeadon. The “chrom” in his name even shows he was specifically named for the Chromatic flight. He looks like core hound, with the four legs, large body, and two heads. In later patches he was changed to a beast, tamable by hunters, and falls into the core hound family. Furthermore, one of the most famous core hounds, the Beast, lives in Blackrock Mountain, and these beasts were a favorite of Nefarian’s enemy, Ragnaros. This is disputable proof that Nefarian’s experiments were taking the essence of the five dragonflights, putting them into a core hound, and created Chromaggus. 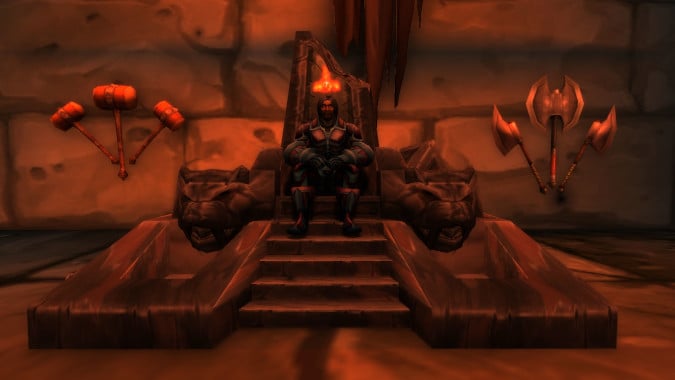 Removing Nefarian from his throne

And with the chromatic experiment put out of its misery, it’s time to move on to the resident mad scientist. He sits on a crumbling throne in the open of a broken room, looking over the mountain. He says, “You are less than nothing. Had I desired your head, it would have been presented to me on a pike.”

Of course one of the items of loot will be Nefarian’s head, so the irony is real. Nefarian spends a lot of the fight commanding the black dragonflight, demonstrating his army — perhaps a preview of the chromatic army he hopes to build. We fight wave after wave of Drakonids, made up of every color of dragonflight. And when they are a pile of Dragonkin corpses, he raises them up as the undead to continue the fight. Nefarian is certainly the toughest fight we’d seen in Warcraft to this point, and we see he’s not just a leader, not just a mad scientist, but he has power over the dead — a theme he’ll explore in his death as well.

And when Nefarian flies into the battle in his full-fledged dragon form, he’s a force to reckon with. A powerhouse of a dragon. His breath is called Shadow Flame, a unique type of dragon breath weapon, and the only thing that could protect against it was scales from another member of the black dragonflight, requiring everyone in the raid to wear an Onyxia Scale Cloak — kind of sad everybody had to wear the scales of his dead sister.

For his time, he was stronger than Ragnaros, to that point the most powerful force we’d encountered, and he had the strongest army in Azeroth. If he had ever taken the initiative to stop infighting within Blackrock Mountain, to combine his forces with the elementals and Dark Iron Dwarves of Ragnaros, Azeroth could be a very different place. Although, Cataclysm would teach us that there is no threat, no matter who collaborates or where they launch their attack, that can’t be overcome by the champions of Azeroth.