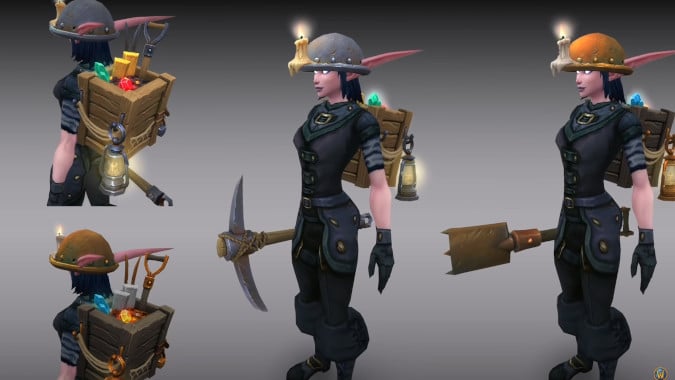 In Shadowlands, we saw a change in professions with crafted Legendary gear, which had ranks a crafter could advance through to make better items. The end result of these crafted Legendaries — which required tons of tedious grinding, with max rank crafters selling their wares for huge sums — is questionable. It’s made crafting professions relevant, but the system is tiresome, and it’s wrecked havoc on realm economies. The cost of leveling crafting is huge, but unless you can make max-level crafted pieces, you’ll be lucky to even cover the cost of crafting the gear you’re trying to sell. And if you’re a non-crafter trying to buy a Legendary, there’s no reason to buy those low-level Legendary base items, because if you ever want a higher level Legendary, you’ll just have to buy a new, higher level base item. It promoted a system that was difficult for crafters and non-crafters alike, with high costs on both sides.

But despite the system’s downsides, it seems like Dragonflight is taking some inspiration from the current crafting model and building on it, with specializations, quality ranks for crafted gear, and recrafting, which will allow any piece of Dragonflight crafted gear to be recrafted into something new.

One thing I want to talk about that we haven’t mentioned yet is the concept of recrafting. It’s still in the works so is likely to change some, but the basic idea is as follows:

Recrafting will allow you to take any piece of Dragonflight crafted gear and bring it back into the crafting screen as a crafter. You can then spend a special reagent, plus a small subset of the original reagents from the recipe to “recraft the item”.

During this process, you can completely change out optional reagents if you want. The new quality of the item will be determined based on the new setup of reagents, plus your current skill. This means you can have an item crafted at a low quality, then later recraft it when you are higher skill to a higher quality.

For non-crafters, we are planning to support recrafting orders as well. In this case, you can send you item to get recrafted to have its optional reagents changed out, or to potentially have its quality increased.

All of this should help players feel comfortable having a high end item crafted early, when it might not be at max quality, secure in the knowledge that they can always have it recrafted to be better later.

This means a crafter can make a piece of gear while their skill in a profession, or in crafting a particular piece of gear, is low. Then later when their skill has improved, instead of replacing that gear with a completely different piece of crafted gear, that piece can be upgraded, using their higher, improved skill. Recrafting will require a specific reagent — not yet specified — and fewer materials than it would be to make a brand new piece of gear. This system should benefit non-crafters, too. Players might start out with lower quality crafted gear — maybe something they bought off the auction house while leveling, or got from a helpful guildmember — and can use the new crafting order system to put in recraft orders, upgrading the gear to higher quality. And this crafted gear won’t just be second rate: it will be comparable to other forms of gear, and sometimes even best in slot. 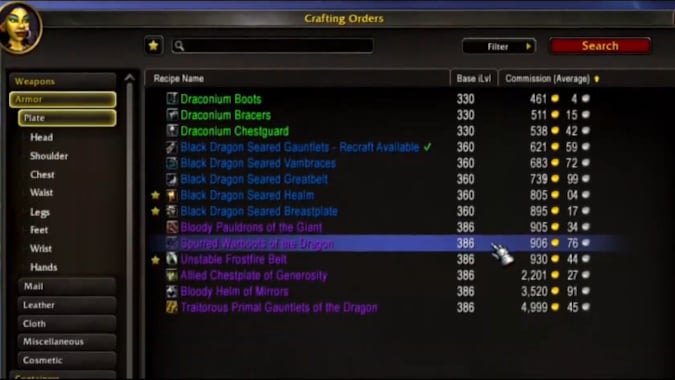 Professions should be more engaging for everyone in Dragonflight

Blizzard appears to be learning from the difficulties of Shadowlands crafting. Increasing your skill in crafting specific types of gear will be similar to how Shadowlands Legendary crafting works — that is (for example), a leatherworker may have been super skilled at making the leather chest piece after making hundreds of leather chest pieces, but they might not be any good at making any other pieces of Legendary leather or mail. One major change is that crafters won’t have to advance by making the same piece over and over. This combats a couple of issues with the current system, which allowed the crafters with the most gold to “win” the crafting game: buying needed materials from the auction house, then crafting things to skill up, selling their high-level pieces on the auction house, making tons of gold allowing them to buy more materials and skill up more — while leaving ordinary players, whose low-rank items sold for nothing, in the dust. Making it easier to advance will hopefully alleviate this problem.  Plus, just making the same thing over and over isn’t fun, and WoW should be fun.

In Dragonflight, there will be different ways to improve your professions — both crafting and gathering. The goal is for there to be fun activities that let players progress, such as quests, treasures, discoveries, and crafting stats.

When crafting gear, there will be a way to target specific secondary stats, similar to the current Legendary crafting system which lets you add a Missive to specific which stats will be on your Legendary item. The word “missive” wasn’t used, instead the developers refer to “optional reagents” — but it appears to be the same concept. And the same optional reagents seem to be available for recrafting, too. When upgrading a piece of crafted gear, players can swap haste for crit and shift their stats around. However, don’t expect a full-fledged Reforging system: nothing like the recrafting system exists for non-crafted gear, and there’s no way to change gear into tier pieces, as with the Creation Catalyst.

Blizzard doesn’t want gear to be grindy, either. As you play, you should pick up items for crafting pieces appropriate to your level of play. For example, if you’re a Normal-level raider, you’ll get plenty of materials to craft Normal-level gear. However, if you want to craft Heroic level gear, you’ll need to supplement your activity with Mythic+, or hunt for rare drops. Crafting higher level gear will pose more challenges. 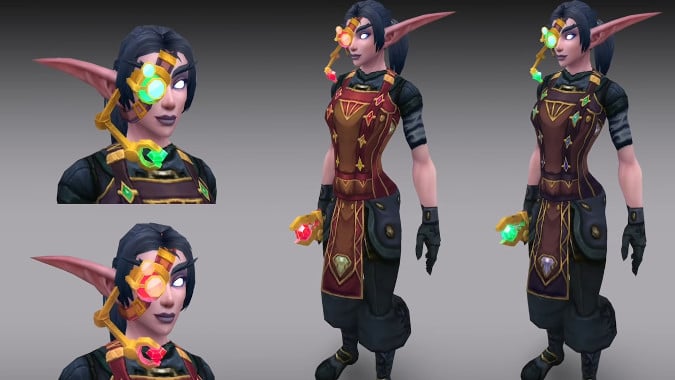 Gearing up for crafting

Crafting in Dragonflight won’t just be a matter of gathering materials in a recipe and crafting it, or clicking an ore node and it’s done. Instead, there will be stats and skills related to crafting, which will affect the outcome and the quality of the items produced. There will be gear as well as tools that can be used. There will be optional reagents that can produce better — or different — results, and of course, what’s an RPG without some RNG.

Blizzard has given us some examples of permanent ways to increase your profession prowess. Maxing out the profession, as has always been the way, is of course still a key way to improve your crafting skill. But once you’ve finished leveling, focusing on a specialization will be the main way to increase quality. Focusing on a recipe will unlock ways to earn specialization points, like helping faction NPCs via quests. And then there’s gear, like pickaxes for miners and needles for tailors.

Then there are reagents. We’ve already talked about the Missive-like optional reagents that can change the stats on gear, but there are also Finishing Reagents, which give bonuses while crafting, increasing quality. A blacksmith might use a special quenching oil, or a Jewelcrafter might use a polishing cloth when cutting gems. Using items like this will increase the quality of the crafted item, but also increase the difficulty of the making item — and therefore require a higher skill. On the other hand, there will be optional reagents that will lower the quality of the item, similar to how the Novice Crafter’s Mark from Shadowlands lowered the ilevel of an item. By making the item of a recipe lower quality, it would then be easier — that is lower the skill level necessary — to make.

Blizzard hasn’t said much about stats on gear yet, but one interesting new stat was mentioned: Inspiration. There’s a chance  that a crafted or gathered item will increase in quality — essentially a crit. Inspiration increases this critical chance. Gear related to professions will be used to help increase this and other stats, improving your crafting and gathering. Other ways to increase stats include choices within profession specializations as well as enchants, consumables, and possibly more options that weren’t  mentioned. 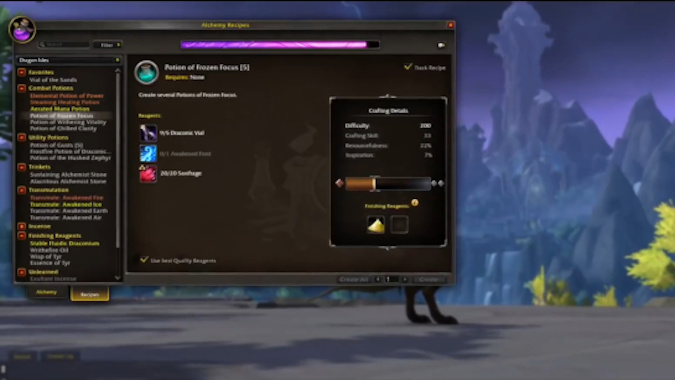 Blizzard has learned a lot about professions moving into Dragonflight

Our first look at Dragonflight professions tells us a lot, but there’s also a lot we don’t know. Blizzard has said they’re still working on professions, so it seems Blizzard hasn’t finalized the system just yet. Hopefully we’ll get more details soon,  will come out later when the devs are ready to reveal it.

However, we do know that professions in Dragonflight will be a more robust system than it has been in the past — and hopefully a more fun system, too. Crafting has its own stats, its own gear, its own enchants, and its own consumables. Professions will produce equipment that characters can level in, that can then be upgraded to compete with even the best end-game raid gear. Gathering and crafting will both see love, not just with one feeding the other, but with specializations, quests, and uniqueness regarding choice. What we’ve seen so far had been interesting – and hopefully Blizzard will succeed in making a professions system that’s more interesting than just a skill number.

But one big question still remains unanswered: will Engineering be relevant at all? Blizzard seems to be hard at work on professions, but we’ll still have to wait and see on that one.

Blizzard Watch is made possible by people like you.
Please consider supporting our Patreon!
Filed Under: Crafting, Dragonflight, Dragonflight Gearing, Professions, Recrafting
Advertisement