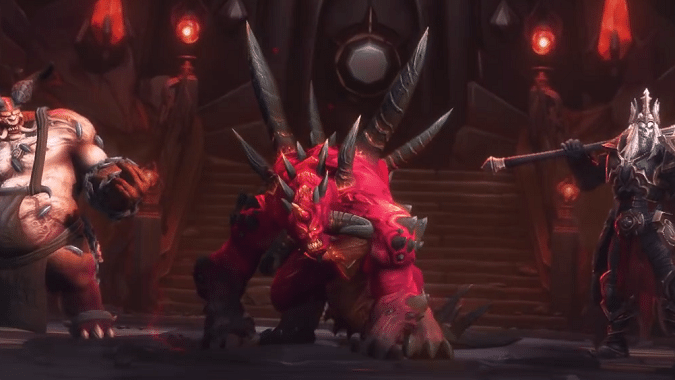 Heroes of the Storm: Diablo guide

Diablo has made his way to the Nexus in the form of a Warrior hero and brings some of his signature fire to the battlefield. While he has a slower attack speed than most heroes, he makes up for it with his ability to position enemies and enormous health pool. He is a menacing foe who feeds on the souls of those he conquers and uses those souls to empower himself in battle.

If you want to just dive right into Diablo play, a couple build options are shown below. A more detailed breakdown of each talent option can be found further in this guide.

This build is good adding damage to Diablo’s arsenal while also giving him added survival. While it sacrifices some tank-specific talents, it still allows for an overall build that gives Diablo usefulness in all situations.

This build takes full advantage of Diablo’s Black Soulstone trait and gives him some incredibly defensive talents. The downside is that dependence on his trait can backfire if you die and lose all of the souls you’ve stored.

Shadow Charge (Q) — The first of Diablo’s position-altering abilities, Shadow Charge is a great way to close the gap on an escaping enemy. Be aware, however, that the ability does knock your enemy back slightly and may actually help your enemy escape if not used with caution. Try to either knock enemies into objects or in the opposite direction of where they seem to be running.

Fire Stomp (W) — Diablo’s minion-clearing ability can be upgraded through talents, but on its own is a bit underwhelming. While this will certainly add some damage, it’s most effective on minions and doesn’t pack much of a punch against heroes. If you can aim it right (or just get a bit lucky), you can sometimes force a stealthed assassin out into the open.

Overpower (E) — My favorite of Diablo’s basic abilities, Overpower can be used to great effect to position enemy heroes exactly where you want them. Diablo will pick up enemies and slam them into the ground 180 degrees in the other direction. One of the best uses of this ability is grabbing an enemy who stepped too close to your towers and forcing that hero behind the gates with no easy escape. Be aware of enemies’ movement abilities before using this, though. A hero such as Valla can easily negate any advantage gained by Overpower.

Apocalypse (R) — Less damaging but potentially more deadly, Apocalypse adds a map-wide stun to Diablo’s arsenal. This can be great during team fights where the area-of-effect circles are close together or to help a teammate on the other side of the map. The downside to this ability is that it can be easy to dodge if your enemy notices the circle quickly enough.

Lightning Breath (R) — My personal favorite of Diablo’s heroic abilities, Lightning Breath is a very potent damage ability that can easily wipe out multiple enemies at once if used at the right time. Pairing this with a stun or using on a cornered enemy will allow you to get the most use out of it. The downsides to this ability are its limited range and the slow turning required to re-aim it. While channeling, Diablo will not be able to spin on a dime, so don’t expect to get much use on enemies that aren’t in roughly a sixty-degree cone in front of Diablo.

Black Soulstone (Trait) — A trait that truly defines Diablo, Black Soulstone can be used for incredibly quick resurrections or for health bonuses. If you don’t choose any talents that affect Black Soulstone, the trait doesn’t require much thought. If you do, however, dying becomes much more costly for Diablo. 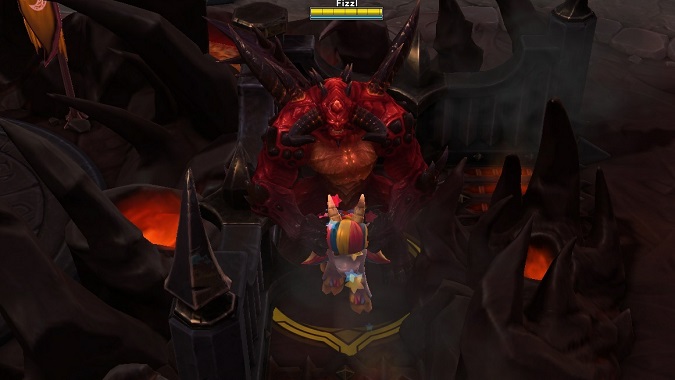 Diablo isn’t a difficult hero to pick up, but he can be more difficult to master. Making effective use of Diablo’s abilities means knowing when and how to use his Shadow Charge and Overpower to properly place your enemies where you want them to be. His talent options offer choices between utility, damage, and tanking. No matter which option you choose, though, Diablo will still be an excellent Warrior to initiate fights.

A popular pick and my personal favorite, Soul Feast is a great talent that adds excellent recovery to Diablo. At a full 100 souls, your health regeneration will be increased by 300%, which can make a huge difference and save you from death. The downside to this ability is that it can be negated if you find yourself dying often and losing souls. Devil’s Due is similar in that it plays off of Diablo’s Black Soulstone trait, but I like to avoid this one because it requires Diablo to die to be effective. If you die, it’s great; otherwise, it’s wasted.

Lastly, Overwhelming Force helps to close in on enemies and has the potential to knock them even closer to your team, but the downside is that if you try to chase an enemy with this talent choice, you will knock them back even farther and likely just help them escape.

Fire Devil adds some much-needed damage to Diablo’s otherwise underwhelming offensive capabilities and helps to clear minions waves more quickly (which helps add souls as well). Speaking of souls, Soul Catcher might seem appealing, but I tend to avoid it because it becomes useless once you reach full soul capacity. It will help in the short-term, but doesn’t do much if you’re avoiding death.

Next up, Demonic Strength is a decent choice if you’d like to add extra utility to Diablo’s positioning abilities. This is a great way to prevent enemies from escaping after using your Overpower ability.

Essence of the Slain would be a great choice for some other warriors, but I’ve found mana to be less of an issue on Diablo. If you find yourself struggling with mana, though, this will help to counter that.

Soul Steal is my top choice for this tier, as I tend to like my Warriors able to take a hit. Coupled with Soul Feast, this choice makes a full-soul Diablo a powerhouse of health.

Battle Momentum is an okay choice, but again, more fitting for some other Warriors. With Diablo’s main offensive ability being fairly weak, the damage gain from this one doesn’t outweigh the survivability gains from Soul Steal.

From the Shadows and Devastating Charge both affect Shadow Charge. The former is useful if you can aim your charge well, but also very situational while the latter is even more situational and its usefulness will depend a lot on what enemy heroes you’re facing.

As discussed above, Apocalypse’s main advantage is its map-wide effect and ability to potentially stun an entire enemy team during team fights.

My preferred talent is Lightning Breath for its powerful offensive capabilities. If aimed right, Lightning Breath can be so deadly that it makes up for Diablo’s otherwise limited damage-dealing potential. Just be sure your enemy won’t be able to easily dodge this, as moving it can be challenging once the channel has started. 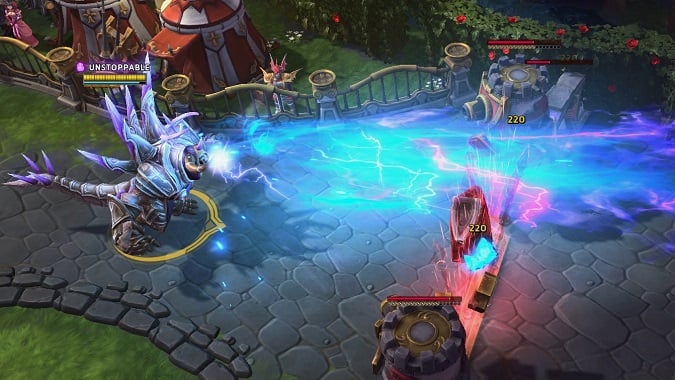 Life Leech and Firestorm are both offensive talents that have their individual strengths and weaknesses. I personally take Firestorm because it helps to clear minion waves quickly and is effective against more than just heroes. In addition, the fiery return can help add an extra chance at revealing stealthed enemies. Life Leech adds a nice amount of damage against enemy heroes, but with Diablo’s slow attack speed and already limited 1-on-1 capabilities, I find Firestorm more helpful overall.

Spell Shield and Siphon the Dead are the two defensive talents in this tier and like the offensive talents, both have strengths and weaknesses. I find Spell Shield to be the better pick between the two largely because it helps in team fights (where you’ll hopefully have a support hero nearby) and Siphon the Dead is less useful with a pocket healer. Siphon does, however, allow on-demand healing, which can be beneficial if you get caught alone or need a quick heal in a pinch.

The level 16 talents offer different forms of utility and your choice will depend on how you prefer to play Diablo. Rampage is my talent of choice here because it not only adds more damage to Diablo but also because the movement can help if you ever need to escape from an enemy.

Domination and Continuous Overpower both allow you to use one ability more frequently, but of the two, I prefer Domination. Shadow Charge is a great way to either run away from an enemy or close in on an enemy on the move and being able to use it more often brings more to the table than more frequent use of Overpower. Continuous Overpower can be very useful against an enemy such as Valla who can easily reverse the initial displacement, but is just too situational for me to pick over the other talents.

Lastly, Imposing Presence is the “tank” choice of this tier and can be very useful if you like to get up close and personal with the enemy or engage team fights for your team.

Lord of Terror is a popular pick in this final tier, and for good reason. It not only adds more survivability in the form of healing, but does so by stealing health from all nearby enemy heroes. In terms of overall effectiveness, this talent is hard to match the others. Taking any other talent means sacrificing an ability that heals and damages, while picking this talent only means sacrificing extra utility on existing abilities (or a blink).

Dying Breath and Hellstorm both modify whichever tier 10 ability you chose. Dying Breath’s reduced cooldown is nice but I don’t find it outweighs Lord of Terror, and I also tend to avoid talents that rely on the player dying to be fully effective. Hellstorm makes Lightning Breath even more deadly and if you find yourself frequently not close enough to enemies to make use of Lord of Terror, is a great choice.

Lastly, Bolt of the Storm is the least appealing choice here. It theoretically is a great escape mechanism, but is more useful on Specialist or Assassin heroes who don’t already have strong tanking capabilities. Additionally, if you’re close enough to enemies to need to teleport out quickly, you’d likely gain more use out of Lord of Terror.

And there you have it! Diablo’s had has effectiveness slightly tuned down recently, but can still be a satisfying choice and very helpful in team fights. Using Overpower to throw an enemy behind your turrets or wiping out an entire team with Lightning Breath is up there with the top most enjoyable plays possible in Heroes. The most difficult part of playing Diablo is knowing when to initiate fights and when to run away in order to keep your soul count high. Play him well and your teammates will be thankful to have you on their side.