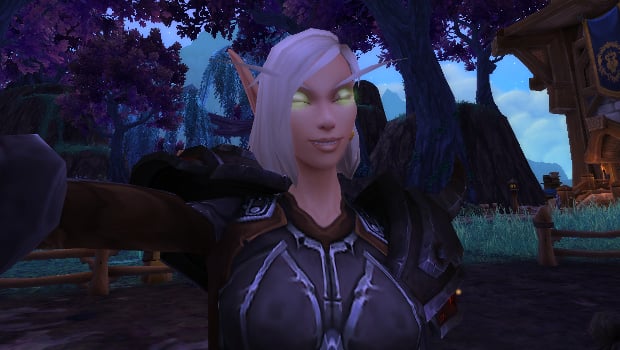 Prior to the addition of the S.E.L.F.I.E. Camera, I rather like the eternal twilight of Shadowmoon Valley. Now? Now I wish I had better lighting for all the use I’m getting out of WoWstagram.

What do you think will happen to our Garrisons once we’re done WOD? What would you WANT to happen to it? I know it’ll likely just stay how it is, maybe with nerfs on some things…

Our garrisons on Draenor will most likely remain on Draenor and not carry over at all. Blizzard tends to not carry features like this from one expansion to the other — it would necessitate a new player invest a significant amount of time into Warlords content in future expansions which probably isn’t desirable.

I do hope they carry the garrison idea forward. My complete thoughts on it are too long for The Queue, but my fear is Blizzard will see that players have some concerns with certain elements of garrisons and do the Blizzard whiplash thing and throw every aspect of the feature into the trash wholesale. That’s a terrible habit of theirs when it comes to WoW development. Something didn’t go exactly according to plan? Don’t iterate; scrap it. I don’t want to see that happen. I want it refined, and I don’t think it needs to have the all-encompassing importance it has now.

At the very least, I want the mission table and follower system to hang around. I love it. We can still have followers who work for us without a huge fortress. We’re all members of our faction’s military and obviously pretty important. Keep it around.

The abilities a follower can have are based on their class/spec — they’ll be labeled on the Follower Pane. For example, Shelly Hamby (my personal favorite follower) is a Subtlety Rogue. There are 9 ability counters in the game, but Shelly is only capable of learning five of them: Danger Zones, Deadly Minions, Massive Strike, Minion Swarms, and Powerful Spell. When you’re randoming two new abilities out of a pool of five (or less), chances are pretty good you’ll end up getting the same thing. I’ve used a retraining ability on her myself and went from Danger Zones/Powerful Spell to Powerful Spell/Danger Zones

Honestly, the best way to find out which abilities a particular follower can have is to look them up on Wowhead. Way easier than trying to determine based on class or spec or whatever. The follower you  mentioned, Humak the Verdant, can learn up to two of the following five: Deadly Minions, Group Damage, Magic Debuff, Minion Swarms, or Timed Battle. It isn’t possible for him to learn a counter to Wild Aggression, for example. Can’t happen.

Personally? Rerolling things in this expansion has given me the same thing I had prior to the reroll so many times that I don’t bother anymore. I keep a piece of subpar crap around or I scrap it completely and get a new one. I’ve deactivated epic, high ilevel followers for a fresh level 90 from the inn because rerolling failed me so often. That’s one of my bigger complaints this expansion; those sorts of rerolls need a little RNG protection.

Why does Draenor use the same currency as Azeroth?

Because I’d be pretty mad if I had no money when I went to Draenor.

do you have to have done something special to get the selfie camera mission to show up? Pray to the Old Gods? Worship gnomes?

Prayer probably won’t help, but it can’t hurt. Unless it’s gnomes to which you pray. In that case, it would hurt a lot. Don’t stoop so low. It will come in time.

Blizzard Watch is made possible by people like you.
Please consider supporting our Patreon!
Filed Under: Followers, Garrisons, Selfie-camera
Advertisement