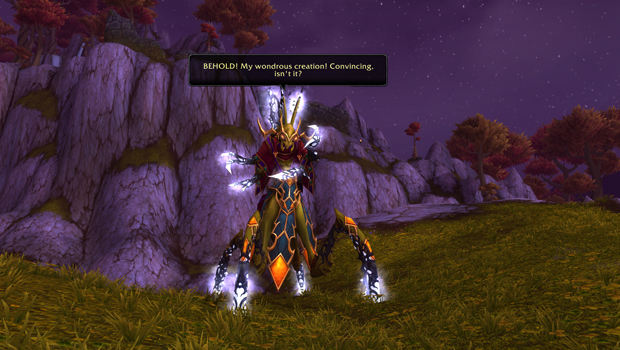 Blizzard’s latest Community Spotlight features an interview with Brandi “Py” Wilson, winner of the BlizzCon 2014 Costume Contest. Her win caused some confusion last year when she was announced, but no costume was available for viewing — unfortunately, Py took a fall before she was able to walk the stage and let everyone see her creation, a remarkable rendition of Grand Empress Shek’zeer. While the contest had already been judged and Py deemed the winner, her costume was no longer able to be worn, which led to the confusion. Photos of Py’s impressively constructed costume soon surfaced after her win was announced. She was later given an NPC in Draenor, a sha-touched sprite darter called Pydarter on the coast of the Orunai Delta in Talador.

What I was interested to read in the spotlight interview was that this was in fact the second Shek’zeer costume Py had created. Another had been made for BlizzCon 2013, but broke as she was putting on the costume for judging. Although she was unable to compete in the event, she decided to make a go of it again and come back the following year — and I’m glad she did, because that costume was beautiful and deserved a second chance. Head to Blizzard’s website to read more about Py and her cosplay adventures, exploits, and advice.