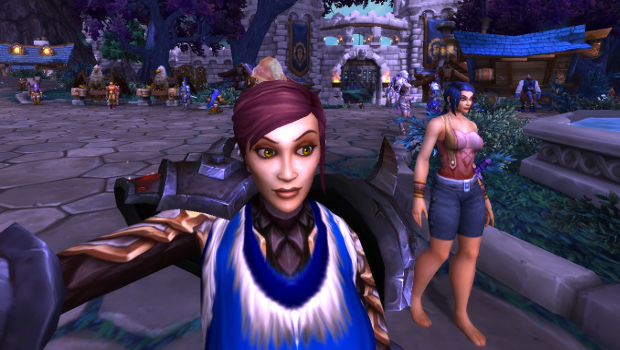 I recruited the follower standing behind my character in the header image because she had the Treasure Hunter trait. She seemed out of place, given most followers are wearing some variety of battle armor. This follower, Iven Page, is wearing a t-shirt, suspenders, jean shorts, and nothing else. Not even shoes. She’s an affliction warlock. Are warlocks so OP they don’t even need armor anymore?

Also, I refuse to recognize the existence of April Fools’ Day. (Though we will have a wrap-up of all the April Fools’ goings-on at the end of the day.)

Can the Darkmoon Faire dates be added back to the sidebar calendar? Pretty please?

I’ve passed the request over to Liz, as she’s maintaining that calendar!

Is anyone else having trouble turning in Time-Lost Vikings? I looked on wowhead.com, and they had a few suggestions to make Olaf find his way back into the garrison, but none of them seemed to work for me. Any advice would be helpful.

I, unfortunately, do not have an answer. I’m pulling this question in for visibility — maybe someone else has an answer. I had the quest from totally-not-Sylvanas and couldn’t turn it in, she would never show up. I eventually abandoned the quest because I got tired of seeing a question mark on my minimap in the dead center of my garrison. I’m pretty sure not-Sylvanas doesn’t live in my fountain.

The logo has been severely delayed because our first picks of designers never replied to our emails despite sending us awesome portfolios. And while we waited to see if they’d get back to us, it fell off of our priorities — while having a good logo is pretty important for branding, most of us are investing way more time into content and functionality. We’ll put out feelers again when we have a break from making sure the site is running how we’d like it to be running.

Lots (by lots means probly vocal minority) complain that 6.1 had no new content.  Meanwhile it was like two weeks previos they released new raid content. If they had waited to release BRF with 6.1 would there still be all the complaining? Or more likely something else to n complain about.

Speaking as someone who doesn’t raid very much … I don’t care when BRF was released. Raid content isn’t my complaint — and I suspect raid content isn’t the complaint for most of those complaining. If it was in patch 6.1, I’d be just as disgruntled as I am now. I’m not asking for more raids, I’m asking for more solo and small-group content. The things they added in patch 6.1 were more reasons to go to pre-existing content rather than actual new content.

have we had any sign or word of Ji and Aysa since SoO?

I don’t believe so! I suspect we never will — or if we do, not in any enormous story arc. They might show up and give some quests or something. That’s only a guess, though. They don’t seem like the sort of characters that would be given a huge followup.