Plan your Diablo 3 character with this web app 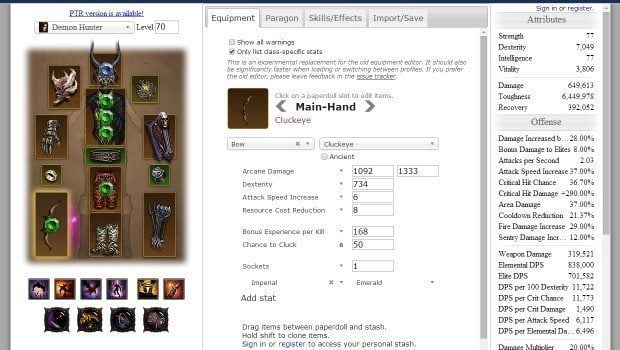 I’ve been researching various Diablo 3 class builds, one at time, mostly for my own enjoyment of the game but also for writing later. I have notes spread out on skills, passives, specific gear pieces, general tips, and I wish there was a way to collect and connect them all together in one place.

I might still have to keep a notebook of general wordy tips around, but Diablo 3 MVP Monstrous found a solution to my gear and skills set problem — it’s simply called D3 Planner. The planner’s developer, Riv, is the same person behind the old popular WoW addon ReforgeLite.

A really awesome feature included with this app is the ability to customize the stats on items. @Diablo

You can start planning a character from scratch, or you can import your already existing characters using your BattleTag (the planner pulls most of your character details from your Battle.net Diablo 3 profile). I opted for the latter, using my old-and-busted Demon Hunter pictured above.

The web app is split into thirds. The leftmost sidebar contains your paper doll of gear, a summary of your skills and passives, your planner profile selection, and a line graph. The line graph tracks your changes in a dropdown category (default: Sheet Damage) so you can revert to an older setup if the changes you put in give you a lower total.

The rightmost third is your character stats in detail, the same bar of information you’d get if you were in game and clicked “Detail” on your character pane. While the in-game details pane shows just what that particular stat does, the planner also shows where you get however much of the stat you have, and where you could get it if you don’t have any. It also highlights on the previously mentioned paper doll the pieces of gear that contribute to that stat. 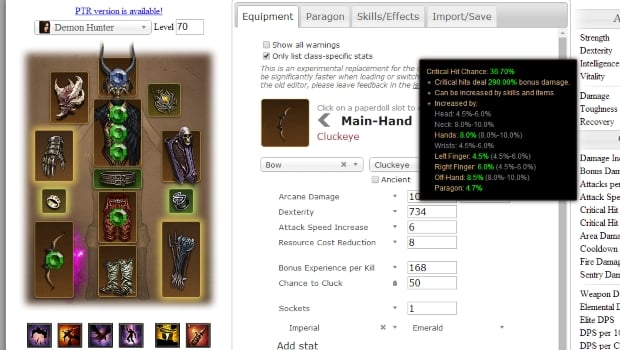 The middle third — well, that’s the meat and potatoes of the planner. Here you can change specific details like Paragon points allocation, skill and rune selection, and specific gear stats. You can check off whether you want to factor in elite damage or not as well as any group buffs.

If you register on the site and log in, you can save your sheet profiles and even access a stash of sorts. The stash in the planner isn’t representative of your actual stash in-game, but is a planner stash where you can keep items for future swaps instead of having to rebuild that item again. Saving a profile generates a link for you to bookmark later, though you can also load saved profiles from the My Profiles category under the Import/Save tab if you’re already working in the app.