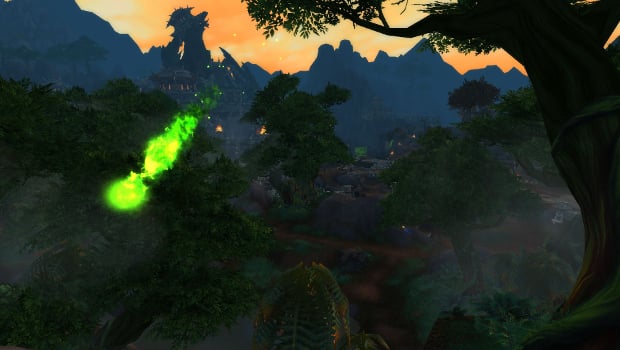 Today’s edition of the Queue is full of patch 6.2 questions — and that’s no surprise, given patch 6.2 is the latest hotness.

Q4tQ, because I really need to know: Why on earth does Teron Gorefiend’s new body look like Ursula and Yogg-Saron had a baby?

I have no idea. He looks way goofy. It’s a far cry from his menacing Burning Crusade appearance — I know he was in a human’s body in Black Temple, but that was his thing, right? He was a quiet, creepy sort of terrifying. Now he looks like Play-Doh.

Why do people keep thinking 6.2 is the last content patch/tier? It seems completely unreasonable.

Blizzard has mentioned the idea that there may only be two tiers of raid content this expansion and the legendary ring questline is coming to a close. There are references to this being the final assault on the Iron Horde and so forth. There could be another tier/content patch, but if there is, it doesn’t seem likely to involved the Iron Horde or any of its baddies. Note that loot coming out of this raid tier, too. The trinkets, rings, and so forth all have crazy, ridiculously powerful procs. They usually save over-the-top effects like that for the final raid tier. Not only do those procs make the final tier special, but they also don’t have to worry about making even better versions of them in the tier to follow. The expansion will reset loot, letting us build back up to crazy things like that.

Signs really do point to this being the final tier of the expansion, and if Blizzard really is aiming for 12-18 months between expansions, the timing is right.

Apparently, Timewalker dungeons are gonna be locked to weekends only. My question is: is someone at Blizzard smoking crack?

It’s a common thing in MMOs to have special events on the weekends — whether that be exclusive weekend content, XP-boost weekends, whatever. Timewalker dungeons appear to be Blizzard’s attempt to do that. I’m not saying it’s necessarily a good move, but it’s a move the rest of the genre has already made.

Personally, I’m holding my opinion until we see it in action. It’s possible Timewalker dungeons would be less special if they weren’t run as events. Would people really want to run old dungeons all of the time? Maybe! Would having old dungeons and new dungeons both active all of the time split the playerbase, messing up queue times for both of them? Possible! Will making them weekend-exclusive suck for players who can’t necessarily play those days? Yep.

There are pros and cons. I want to see them in action before I get mad about it. Or happy about it.

I was a diehard keyfob guy until the battery started dying on mine. That took years to happen, but it did happen. I went phone app not because I was afraid of another dead battery, but because I didn’t feel like ordering a new one and the app was convenient. I treat my phone like a baby so I’m not going to be losing it anytime soon. If you go phone app, write down your authenticator’s serial and keep it somewhere safe. If you ever need to reset your phone to factory settings (or if you do lose your phone), keeping the serial will save you a headache when removing/replacing the authenticator.

I notice that Gul’dan and Grommash aren’t listed as bosses in the Hellfire Citadel raid.  I know the speculation is that Grommash is going to be redeemed, but what about Gul’dan?  Is it possible that this ISN’T the final raid of the expac?

There’s a possibility Gul’dan is handled in a different way via Khadgar’s legendary quest. There’s also a possibility Gul’dan survives despite our efforts and he’s the driving force that takes us into the next expansion. Warlords of Draenor might have been an overblown method of leading us into another Burning Legion expansion. Wrathion warned us about that in Mists of Pandaria, right? His weird prophecy was about the return of the Burning Legion.

Did I miss any mention of new 5 mans in the 6.2 patch notes?  I saw the mythic announcement but nothing else.

Blizzard Watch is made possible by people like you.
Please consider supporting our Patreon!
Filed Under: Patch-6.2, Teron Gorefiend
Advertisement