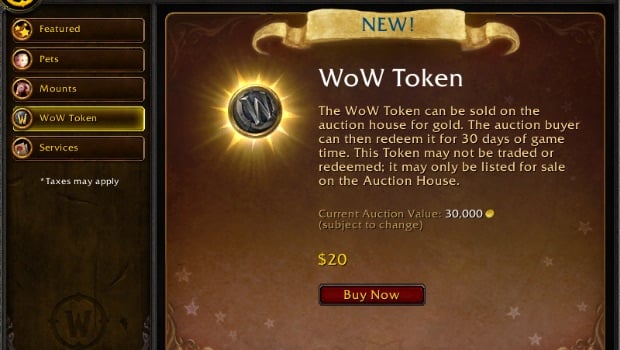 Let me start off with a story.

Let’s assume you have a ton of gold. Let’s say you stroll by the auction house and you see that the WoW Token has dropped to around 20,000 gold (in the US it often is below this, in the EU not as of yet) and you decide hey, I’ve got a ton of gold, I’ll buy a year’s worth of tokens and so you do. You dump 240,000 gold at the AH, redeem a bunch of tokens and bam, you’re paid up for a year. You just saved fifteen dollars a month (again, using US numbers, I know it’s different elsewhere in the world) for a whole year, and you’re feeling pretty good about it. And there’s no reason you shouldn’t — that’s why the token exists, after all.

What I find interesting is to consider all the side ramifications of this deal.

First up, someone paid real cash for each and every one of those tokens you just bought. Not only that, but they spent more on the tokens than you would have on your subscription, roughly five dollars more for one WoW Token than one would spend on one month of game time. Since you just bought a year’s worth of game time, the token ends up even more expensive — a six month game sub is $12.99 USD, which we can round up to thirteen bucks. Of course, you’re paying in gold, so what do you care, right? Right, but it’s still a seven dollar profit Blizzard is turning per month, and that ends up as an extra eighty-four dollars Blizzard is making. It makes solid financial sense for Blizzard to make this offer. In other words, instead of charging fifteen or thirteen dollars for that month, they’re charging twenty, and someone is paying for it.

As interesting as that is (Blizzard has found a way to monetize a service people have been offering each other haphazardly for years — on at least two occasions I had a friend give me gold in exchange for me buying him a game time card over the past ten years) another interesting ramification is this: If you buy and apply those tokens to your account, you’re now subscribed for a year. You won’t be charged, you won’t even notice — and it now doesn’t matter if you log on or not. What if you get bored with WoW? Well, you’ll probably stop playing it. But since it’s free anyway, so what? That means Blizzard gets to count you as a subscriber for that full year and they got to charge an extra five to seven dollars a month for that time.

That also means that when the gold price of the token goes down, it’s good for Blizzard — the more tempting it is to dump your gold on tokens, the more likely you are to do it, which means getting to count you as a subscriber for longer for more money per unit of time. The fear would be that the price would drop so low that no one will buy the tokens any longer, which would decrease the supply and increase their value — but only so long as the demand for them remains constant. If everyone has a year’s worth of game time and no one currently wants to buy them, then the demand will decrease for a while. The market for WoW Tokens could therefore become a means to measure the overall health of the game. Too high a price indicates no one is buying the tokens with the intention to sell them on the AH, too low a price and we’re in danger of seeing them stop being a commodity.

Still, it’s a fascinating thing to consider. If the price remains low enough, people are tempted to spend more gold to get more time (‘It’s only 20k gold for a month of game time, I’ll buy ten months’) and that makes them subscribers for an extended period of time. In a way it’s an ingenious way to replace the older method of Lock in for a year and get a pony and beta access which causes a lot of players to get agitated when they didn’t immediately get beta access — people lock themselves in, and do so because from their perspective, the game is essentially free now. (Not counting the opportunity cost of generating that 240,000 gold from the example, of course.) Players who sell the tokens on the AH get extra gold. Players who buy them get ‘free’ game time. Blizzard makes more money per month than a sub, and gets to count players as subscribers longer.

One is forced to wonder what kinds of services we’ll see next and what effects they’ll have that won’t immediately be apparent. Because this one? This one’s been pretty ingenious.

Blizzard Watch is made possible by people like you.
Please consider supporting our Patreon!
Filed Under: Cost, Subscription, WoW, Wow Token
Advertisement