The Queue: Background downloader, professions, and the Brox paradox 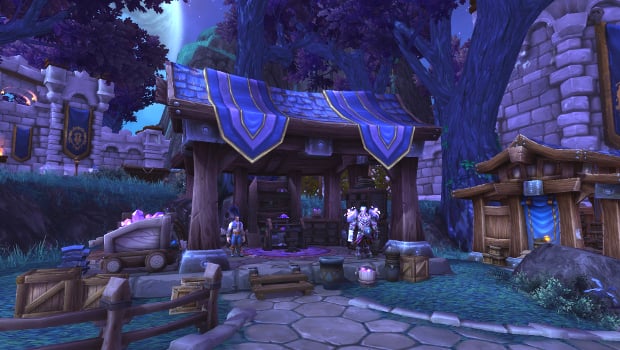 A 2GB patch just hit the background downloader.  Assuming this is 6.2 patch data, do you guys think we might be looking at a June or July release after all?  Or do you still think August or later given the current state of things on PTR?

I’m guessing somewhere around mid-June. I’ve seen people speculating the patch is this upcoming Tuesday due to the background downloader being active, but that’s highly unlikely. The current PTR build isn’t marked as a release build. The background downloader could simply be providing the completed art assets that aren’t likely to change in future PTR builds.

Since last week’s extended maintenance, the fluctuations in WoW Token prices seems to have stabilized signifigantly.  Is this a result of Blizzard tampering with their formulas or is it caused by the actual supply & demand of the free market.  I ask because it seems to hold true accross regions and everything.

There is indeed much speculation that Blizzard has been meddling with the market as of late, but it’s impossible to know whether they have or not unless they say so. It’s certainly suspicious that the WoW Token market suddenly stabilized across all regions at the exact same time. Blizzard could have been tampering with the market, or it could be a coincidence that supply and demand hit its equilibrium simultaneously across all regions.

If it is a matter of Blizzard meddling with the market, it’s possible their goal was to smooth out prices within a 24 hour time period. If you were a person who could only play in off-peak hours, your Token prices were completely different than someone who could only play in peak hours. Is that fair? Maybe. Maybe not. Similarly, I’m sure there were people tracking the ideal time of day to buy Tokens and taking advantage of how quickly the market would adjust to supply. If enough people started doing that, the price fluctuations could get absurd. But we don’t know if Blizzard did anything at all, so this entire paragraph could be moot.

Did they sneak in automatic apprentice riding somewhere and I missed it?  I’ve been leveling a new paladin with my SO (who’s never played before, but that’s a different story) and when we hit 20, she had to pay to learn riding and I didn’t.  It was just there in my spellbook, taunting me with the knowledge that I had been running around for nearly a whole level instead of riding around with my hooves blowing in the wind.

Classes with class-based mounts are automatically given riding, but I’m not sure that’s documented anywhere in the game. Paladins and warlocks get apprentice riding for free, but have to pay for everything else after that. Druids get basic flight for free, but nothing else. Strangely, I believe worgen — the entire playable race — gets apprentice riding for free thanks to Running Wild.

The quests to earn class mounts aren’t in the game anymore, so getting riding for free is the consolation prize, I guess.

Follow up from Rossi’s response.  If the Dark Portal was never opened would the elves have even defeated the Burning Legion during the War of the Ancients?  Broxigar saved/killed a few key people didn’t he?

So yes, the elves won without Broxigar. But because Broxigar went back in time, the timeline now says he was always there. For him to have gone there, though, the victory had to have happened without him before it happened with him.

Do you think WoW would ever see a decrease in the drop rate of green items? I ask because it might be one way to help low-level profession skills be relevant again. With lower overall ilevel, characters might need to rely more on flasks, food buffs, crafted gear, and enchants throughout the leveling process. Going against this would be 1) the idea that Blizz wants us to get to the end game faster; 2) the prevalence of heirlooms.

Speaking personally, if leveling in WoW required me to get all of that stuff (flasks, food, etc), then I probably wouldn’t level anymore. It’s a lot of work for something that shouldn’t be work. I’ve played RPGs where you need to pause and use your potions and so forth to buff up before every battle. What usually happens is I get bored of scrounging around for that stuff and stop playing. For big bad bosses, or endgame in general, I don’t mind so much. For every single part of the game? That’s tedious.

As for gear, one of the few things I think was done well with professions in Warlords of Draenor is the low level requirement for crafted gear. You can equip all of those items at level 91. If you only have one character, that isn’t useful. If you play alts, though? Between crafted gear and archaeology items, you can potentially kit out all of your alts in some amazing gear and tear through everything. Combine crafted gear, archaeology items, and heirlooms? You’ve created a monster.