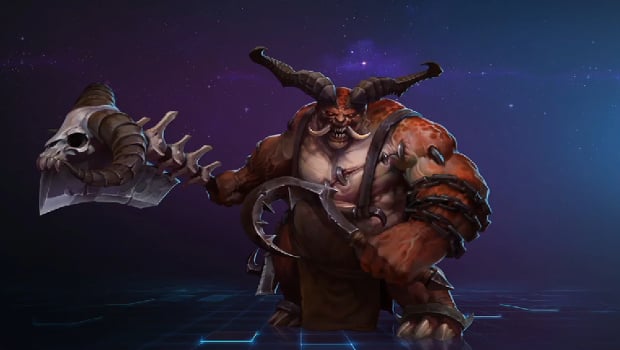 During today’s Heroes of the Storm Mayhem Begins livestream event Blizzard announced a new push to roll out content in chunks based on their other properties. They are kicking it off with a focus on the Diablo IP called Eternal Conflict. This will start with a new map based on the High Heavens/Burning Hell duality of Act Four in Diablo 3 called Battlefield of Eternity. They also officially announced the next hero to be released: Diablo’s The Butcher as a melee Assassin.

The new map contains new art, new mechanics and new mercenaries. At the center of the two-lane battleground two Immortals, one good and one evil, locked in an eternal struggle spawn periodically. Players attack the opposing side’s Immortal and when it is defeated, their Immortal will push a lane for them. But unlike the Haunted Mines skull golem, this NPC will pick the strongest lane to push at the time. Also, whatever health it had remaining when the other one was defeated will be transformed into a shield that is used to power ranged attacks when it heads down the lane. When that shield is depleted it then switches to melee attacks. So it’s in your bests interests to not only defeat the enemy team’s Immortal first, but to also protect yours to keep its health high. 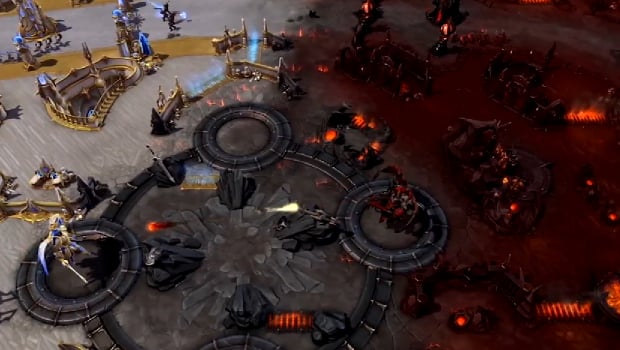 Fighting over the Immortals is going to be brutal as they spawn in the middle of the map. When one drops below 50% health, it changes position to another part of the middle so area based damage like Gazlowe’s turrets won’t be as useful as you’d assume. Also there are boulders in the middle obscuring line of sight of heroes battling it out over Immortals.

Two new mercenaries are also introduced on this map. Replacing the Siege Giants are Impalers that focus single-target damage, but do more damage to structures than Siege Giants. The other new NPCs to recruit are the Fallen Shaman. They come with two hounds that they can resurrect. If left unattended, they can whittle down turrets by rezzing their hounds every time the turret kills them and keep the pressure up.

Finally, in classic Diablo-style, when you take out the enemy core, it explodes like a loot pinata that we are all familiar with including piles of gold and glowing rare item drops. Not that you can pick them up, but the visual is appreciated. 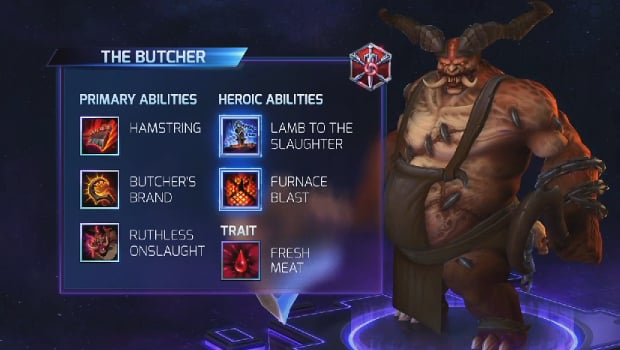 We also got our first look at the next hero to enter the Nexus, The Butcher. He is a melee assassin that uses stuns, engagement tactics and quite an evil bag of tricks to take down enemies. His trait is Fresh Meat, which allows him to pick up blood droplets left behind by dead minions, mercenaries and heroes. Each one increases his attack damage by 1% for a max of 25%. If he dies, he loses all stacks, but can halve the stack loss through a trait.

His other abilities include Hamstring to slow an enemy, Butcher’s Brand which marks an enemy to steal health from when attacked and Ruthless Onslaught for a charge that stuns if The Butcher connects. His Heroics are Furnace Blast, an AOE fire damage ability with 3 second cast time, and Lambs to the Slaughter which puts a stake in the ground and tethers an enemy to it for a few seconds. Lambs can also be traited at 20 to tether all enemies caught in the AE target area. Heroes Nexus has a full list of his abilities and traits as well as video showing off his moves.

The downside of The Butcher is his relatively low health and can be killed very quickly if focused on by the other team. But if teamed up with someone like Jaina, his charge/stun followed up by a slow can allow Jaina the time to DPS down the target quickly. Also his traited Lambs ultimate can keep a tightly packed enemy team confined to a small space long enough for his team’s other area based ultimates to go off and take down the entire group.

The Battlefield of Eternity map and The Butcher will both be released on Tuesday, June 30th, but you can get a preview of them on the new PTR coming online a week before on June 23. You can see the Butcher in play on the new map on the Mayhem Begins VOD at about the 2:45:00 mark. Blizzard reiterated its commitment to rolling out new heroes every 3-4 weeks, so expect another Diablo-based hero announcement early next month.

Blizzard Watch is made possible by people like you.
Please consider supporting our Patreon!
Filed Under: Battlefield-of-eternity, Eternal-conflict, The-butcher
Advertisement