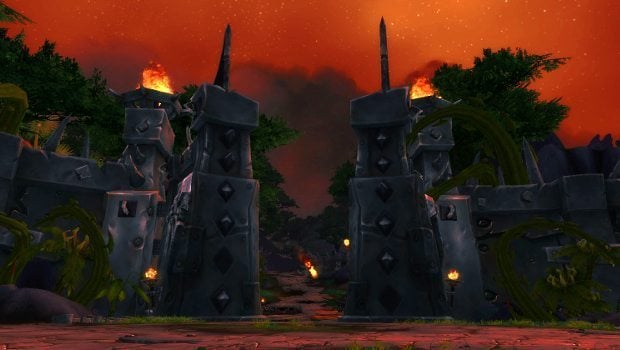 With patch 6.2 comes Tanaan Jungle, home to Hellfire Citadel and the bulk of the patch’s new solo content. Most players are likely to head there first when the patch launches, but be warned: you can’t simply walk into Tanaan. There are a few steps you need to take first.

Upon logging in for the first time, you’ll discover Khadgar and some of your faction’s leaders have gathered in your garrison town hall in preparation for the Tanaan invasion. The invasion will be held via the sea, so you’ll need a shipyard. A new quest chain will direct you to Gorgrond’s Iron Docks, where the Iron Horde is in full retreat. A brief collection quest and a less-brief Apexis-style objective later, you’ll meet up with Yrel (Alliance) or Durotan (Horde) to bust the Iron Horde’s shipwright — Solog Roark — out of captivity and recruit him to your cause. He doesn’t like Gul’dan much, either.

Back at your garrison, you’ll be tasked with constructing your shipyard. There is a minor gold and garrison resource cost, but it’s small indeed — all the resources you need will be given to you by the quests to free your shipwright, meaning the resource requirement might as well not be there. The gold cost of 150g is more meaningful than the resource cost, but at this point in the expansion, it’s likely you have 150g sitting around. Your shipyard will be built instantly and you’ll then be tasked with constructing your first ship. There’s no room for error here: talk to the people indicated by the quest and you can’t go wrong. Building ships requires the new Oil resource, but you’ll be given more than enough to get started. Your first ship will only take a single minute to build and then you’re ready to move onto the next step.

After talking to Khadgar and Yrel (Alliance) or Draka (Horde) — they’ll be right there in your shipyard — you can begin the assault on Tanaan Jungle. Once you reach its shores, you can’t immediately step into the sandbox. First, you’ll need to complete a series of quests with Draka/Yrel at your side. Echoes of the Warlords of Draenor introductory quests abound here — you’ll see the shattered remains of the Dark Portal and the villages you encountered during your daring escape. Before long, you’ll storm the gates of Jurassic Park Tanaan Jungle and establish your faction’s forward base camp. For the Alliance, this location is called Lion’s Watch. For the Horde, it’s Vol’mar. Here is where you’ll get your first Tanaan Jungle flightpath. From that point forward, you can access Tanaan Jungle whenever you’d like and the content becomes more freeform. There are quests, daily quests, and other activities throughout the zone to be completed at your leisure — think Timeless Isle with a little more structure.

For an in-depth guide to the rest of Tanaan Jungle beyond the introductory stages, check out Wowhead’s guide to Tanaan Jungle. It simply can’t be beat.

Blizzard Watch is made possible by people like you.
Please consider supporting our Patreon!
Filed Under: Patch-6.2, Tanaan-jungle
Advertisement