The Queue: Slayer of Stupid, Incompetent and Disappointing Minions 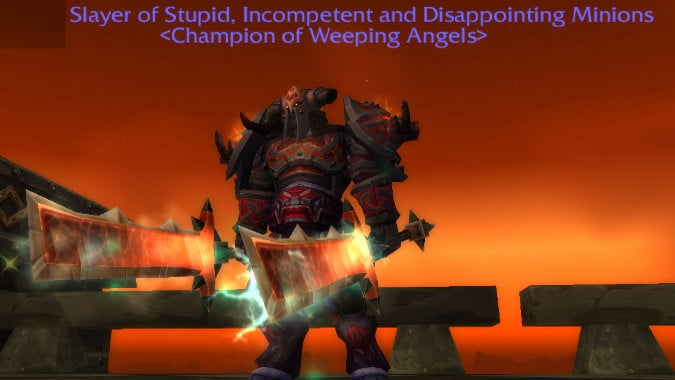 Still absolutely one of my favorite titles in the game.

Welcome to the Queue, where you ask questions and we at Blizzard Watch answer them.

THAT’S NOT EVEN FUN, DUDE!!! YOU JUST SAW ME DOING ONE RIGHT NOW!!!

Still, I agree that this process could be streamlined. I don’t see why I have to go out, do the first objective, then come back and get the quest to do the other two. Just roll all the quests into one quest where I go out and do three objectives.

I have 4 felblights.  And I skin everything, even stop if I see someone who left a carcass.  I of course have 897 raws when i last looked.  It has a worse drop than artic fur did.  Seems like everything you need to craft something halfway useful in this xpac is a big pain in the ass.

I have 1,277 True Iron and 1,442 Blackrock Ore from the first day I hit Tanaan, last Thursday. I haven’t bothered with my garrison mine in days, because I spent about two hours mining in Tanaan like a madman while I do the various quests for Apexis.

I bought six of them.

I hate felblight and its accursed drop rate with a fiery passion like unto the heat of ten billion exploding stars.

Q4tQ: anyone else noticed the absolutely ridiculous amount of apexis crystals that you get in Tanaan?

I had my apexis maxed out when 6.2 hit.  Today, after a week of questing in Tanaan Jungle, I have 120005 apexis.  If this holds up, I’ll be able to get the fel raven mount midway through next week, and getting the other apexis mounts and pets from rep vendors will never be a problem.  This is a ton more than I was expecting, and while I’m glad to not have it be a long grind just to buy a mount, I can tell I’ll have way more apexis than I know what to do with by the time I’m done with the reps.

Just doing the various quests today, I went from less than a hundred Apexis to slightly under 14k. (I used a bunch the other day.) I like it, actually – it means I can get a 695 upgrade every couple of days, which is a pretty sweet return on investment in terms of time. I’m not even trying for mounts or pets or any of that, just gearing up characters. I know I may eventually get raid gear to replace what I’m getting, but being able to fill slots with crit gear where I didn’t have crit before due to gear design has really done wonders for my DPS and made me an overall happier camper.

So basically, yes, I agree with you that you can get a lot of Apexis, and I think it’s great.

Anxious for the next expansion, any word yet about it?

Nope, and I wouldn’t expect any word about it before Gamescom at the earliest, and more likely we won’t hear much before BlizzCon. That means that Tanaan and Hellfire Citadel with be about four and a half months old by then, which isn’t too bad for a final patch. Now, if it takes too long to launch the next expansion, then we may have some problems.

Qftq: are tanks are overtuned? … or is everyone else undertuned? On my prot pally and warrior I can solo faceroll through fangrilla and throne… my shadow priest, rogue and even formerly op warlock, not so much, in fact they sometimes get murdered in the non elite areas due to respawns or patrols. Meanwhile the tanks, they can just pull 10 or 20 things in the elite zones with no fear of death or even injury.

I try to group with people in TJ when I’m on my tanks, not because I need to, or because it makes it faster, it doesn’t, but because I just feel really really bad for them.

I find that when I go Titan’s Grip fury that stuff dies much faster than when I go protection, even Gladiator prot. So I generally stay fury unless I know I’m going up against a very tough elite and I’d rather wear his health down while taking very little damage, especially as Resolve buffs my absorbs so I can just Shield Barrier and take almost no damage while Shield Slamming things in the face and using Revenge, Heroic Strike with the Glyph of Cleave and Thunder Clap to take down groups.

I wouldn’t say tanks are overtuned. It’s still a lot harder to kill a prot than a pure DPS, but if I want to move fast, fury still has the advantage. (My fury gear is my prot gear, so I know it’s not gear making the difference.) When the respawns are super thick due to a lot of competition, I prefer pure DPS.

That’s the Queue for today. Thanks to everyone for your questions. See y’all Friday!