We’ve already discussed how to build a team for PVE a bit, but that process is centered mostly around countering the opponent you know is waiting for you when you begin the fight. However, pet battle PVP is centered around queueing up to face a random opponent, so you can’t rely on family interactions to get you through. So, how do you know what your moves will work when you don’t know what you’re facing?

Like the PVE stuff we’ve discussed, we’ll start at the basics and work our way up to complicated. First, let’s discuss the bare mechanisms behind pet PVP.

When people say ‘pet battle PVP’, they’re all but universally referring to PVP you queue for from your Pet Journal (it’s the button at the bottom right that says ‘find battle’). You can queue up with any team, at any pet or player level. If you’re using a sub-level 25 team, your team level is averaged. If you do decide to queue for lowbie pet battle PVP, know that many of your opponents will game this system. A couple level ones and a ringer around level six or so generally makes for level two or three opponents, for example, and that level six will typically destroy a level three team without issue.

Like other PVP match finders, at first the game will try to find opponents as similarly matched as possible, but gets less picky as you languish in the queue. Unlike other types of PVP matchmaking, both in WoW and Blizzard’s other games, there is no consideration for expertise and no ranking system at all. Pet level is pretty much the sole consideration the queue makes. Otherwise it’ll just shove your pets at whoever’s up next in line, even if the person who’s up next is the same person you just faced. Your opponent will be a randomly generated character, not the visual of your actual opponent, so the only way to tell this is if you face somebody using the same pets (custom names are a giveaway) with the same general strategy.

Their transmog so isn’t this on point, in other words.

There are a number of rewards associated with pet battling in PVP. For lowbie alts, winning in level 25 PVP grants even more player XP than doing quests–but only if you win. If you choose to go in for lowbie pet PVP, your pets also get XP with all the same provisions they would from a PVE battle but again, only if you win. If you lose, there’s really no consolation prize other than a better understanding of the minigame.

At higher levels, there’s the weekly quest to win 10 matches, picked up in your faction’s shrine in Pandaria, which is still a pretty decent reward. You can complete that on any character, but to turn it in you have to be able to go to the Shrine. There are lots of different rewards given from achievements as you hit higher and higher numbers of battles won, all the way up to the Trainer title at 1,000 PVP wins. Also, if you happen to PVP in Draenor zones, those wins count toward both the super sweet monument in your garrison and the level 3 Menagerie unlock achievement.

There are a few different ways of selecting pets for a team. One is just to select a few pets which are strong on their own. The Junglebeak is a pet like this, with Rain Dance to buff its accuracy and Nocturnal Strike, a low accuracy, but high damage move. Occasionally people will select a very powerful pet like this one and just pack their whole team with three of the same. This can put you at a distinct disadvantage though, because if your opponent has a pet or two that can defend against or attack that single pet you’re using strongly, or counter your strategy altogether, you’re probably in a lot of trouble. For the most part I choose these sorts of pets if I just have a decent 2-pet thing going on and need a third to fill out a team.

In general, a more potent strategy is to mix together different synergies and see what sticks. A very popular current example of this is the combination of Murkalot’s Righteous Inspiration and Graves’ Grave Destruction. Righteous Inspiration swaps in a buddy and doubles their damage in the next turn. Grave Destruction is a very strong AOE move which actually scales up in damage per hit as opponent pets begin dying. This has given rise to an AOE-heavy metagame, because it’s difficult to counter heavy AOE. AOE with smaller hits, like Magma Wave, can be relatively nullified by Sandstorm, but even if the pet in your front row has dodges with such strong AOE that back row is getting less and less healthy. 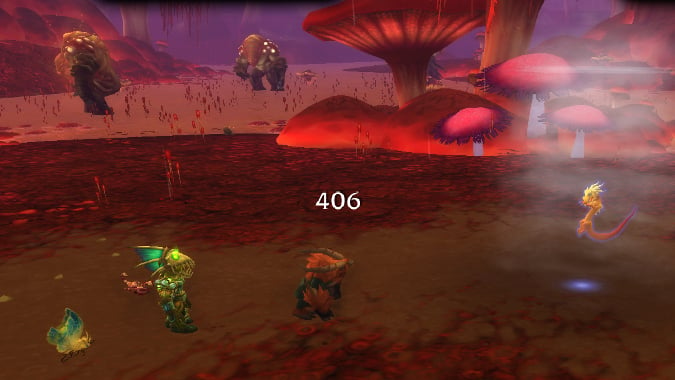 Debuffs applied to your opponent tend to be the easiest to counter. A pet that has, say, Shattered Defenses can just be moved to the back row before a big DPS move goes off. However, applying a bunch of DOTs to a pet and then force swapping them to the back row to die a long death has its merits, too. Moves applied to the environment, like the Turret, are a bit more difficult, but can be removed with one of a few moves or else ignored entirely with self-shielding.

Weather is a bit more difficult to counter, but it ends up being a moot point for the most part if you’ve got an Elemental, or a different Weather to apply over it. Self buffs like Rain Dance are the most difficult to counter directly, so it works best to just avoid those, either by saving your high-yield moves for when a defensive buff wears down, or dodging until their offensive buff is gone.

What I usually do to build my PVP teams is just start off picking a pet, or a move I wanted to use as a hard counter to what I’d been seeing in queue, and then build to that pet’s strengths. If I wanted to go with a Sandstorm pet because of the heavy AOE meta, for instance, a good choice might be the Enchanted Broom. It has a few strong DPS moves to cut through that Sandstorm, but it doesn’t have the vulnerability to Undeads the Humanoid Anubisath Idol has. It might be smart to include a per-hit buff, to cut down the penalty of the Sandstorm, so I might pick a Voodoo Figurine with Wild Magic, because it has relatively high damage abilities to go along with it, no smaller DOTs to get absorbed by the Sandstorm. Lastly, that Junglebeak we discussed earlier will do nicely, with a heal tied to that Rain Dance for a bit of extra longevity. 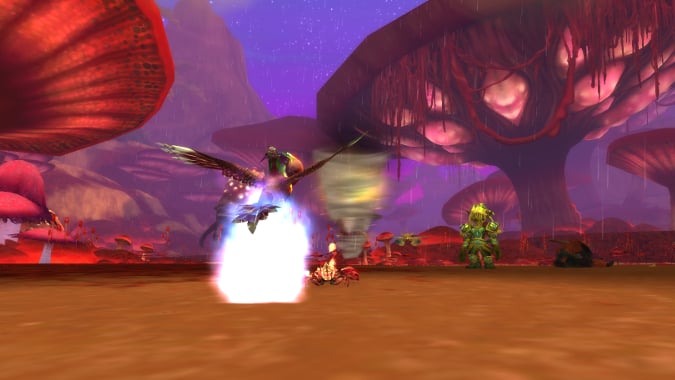 So, how can you know if the combos you made are any good, or what combos are even out there? There are a few extra resources to get you started. One of the best is the Warcraft Pets forums. Because it’s crowdsourced, that’s where you’ll find trends for the PVP meta quickly, and it’s a good place to see some of what others are trying out, too. There’s a good bit of sorting out you’ll have to do, because all their battling info is in one spot — they don’t separate PVP and PVE. If you’re looking for proven teams and, more importantly, why these teams work, try Disco Doggy’s pvppetbattles.com. He specializes in pet PVP, and has lots of different teams highlighted with his strategies and win rates for each.

For me though, other than keeping an eye on the meta every so often, the easiest way to figure out combos is just by queueing up. Trial by fire, perhaps literally if your opponent has a Fel Flame. There are such a huge number of abilities and ways to counter them that there’s no way you’re going to learn them all from even the most informative PVP resource out there. But I guarantee that as soon as you have a team you feel really confident in, your opponent will show you the way to counter it. Then, you can use that knowledge to build your next team.

If you’re feeling uncertain about jumping into pet PVP, you can also duel a friend with your pets the same as you can with player PVP. Just make sure your team is set to battle, then right click their nameplate and select the ‘pet-battle duel’ option. There’s no real reward or reason to do so, other than getting your feet wet and having fun. And really, who wants to have fun while they’re playing video games.