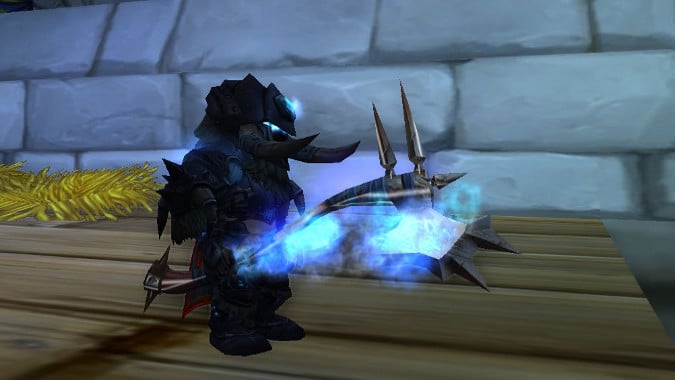 I don’t mean I’m sad, I literally mean the blue gear you get as a DK. It looks sweet, it’s pretty awesome stats (competitive with Outland gear) and I’ll likely keep it forever for the mogging. I like it.

So far the DK feels significantly weaker than the monk did, and that’s awesome. The monk dominated low level play. My brewmaster monk absolutely owned every pull. Now, on a level 60 blood DK, I have to actually work to stay alive and I don’t utterly destroy the DPS charts the way the monk did. I know monks aren’t super strong at max level, but up to 55, they’re crazy strong.

I’m happy again. This is me being happy. The death knight seems more fun to play.

Now for the Queue.

If I’m to pick one (1) Warcraft book to read on an airplane, which do I choose?

The Last Guardian by Jeff Grubb.

The #2 choice (for me) is Rise of the Horde by Christie Golden.

I am extremely angry today for no reason, and while I would usually work this out by beating something in WoW, I am at ‘work’ (I work from home) and can’t. Suggestions?

When I am extremely angry and can’t vent it, I listen to Ministry’s Psalm 69, especially Just One Fix and Scarecrow. I sing along.

Is anyone else not all that excited about flying in Draenor at this point? I was initially pumped and set about completing the achievement… then I realized the main benefit is that I’ll be able to get from my garrison table to my naval table faster.

I have a lot of friends who wanted flying in Draenor, and I’m happy for them that they’ll get it. But for myself it’s almost completely unimportant. I don’t care about it personally, I’d personally be happy if it doesn’t get implemented in Tanaan Jungle because I like having to do the zone on a ground mount. That’s just how I feel about it, though – for the people who want flying, I hope you have a good time in Draenor’s skies.

Where is the “Pets of BlizzardWatch” column we all need?

Well, I can’t do all my pets in one Queue, but I can give you a small taste. 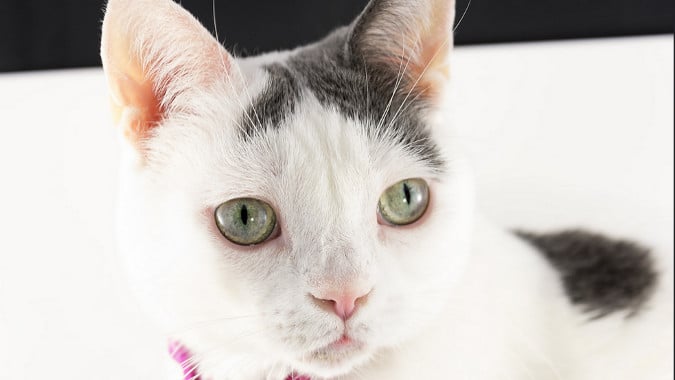 This is Puck. We’ve had her since 2007, making her eight years old, and she’s actually got a tangential World of Warcraft connection. When we first got Puck, I was raiding in The Burning Crusade and one of the characters I was playing a lot was my resto shaman.When I played the shaman, Puck would sit, fascinated, watching as I cast Earth and Water Shield and Chain Heal. She would occasionally try and eat my shaman.

One night I was healing a Karazhan run, and on the trash before Curator I had to take an AFK, so I said on TeamSpeak (that’s what we used back then) that I would be right back.

I got sidetracked by a problem (honestly, I don’t even recall what it was anymore) and so I got back five minutes later than I expected only to find that they’d already pulled Curator. And there was Puck, on my keyboard, hitting the button that cast Earth Shield. Since I had it bound to the key directly next to the one that cast Chain Heal, and because I had the tank targeted, Puck essentially healed the entire fight while I was away.

The best part? All the compliments. “I don’t think you ever healed that fight better.”

I stopped letting Puck near my computer after that. My ego couldn’t take it.

Q4tQ: I mostly have my garrison followers leveled up to purp-100 and i-475, so I started throwing gear upgrades at the followers who are working the shacks, plus my bodyguard. And it got me wondering if upgrading my bodyguard’s gear actually helps her when we’re out doing dailies. Does it? Or does it not matter at all?

As far as I understand it, the follower as bodyguard works as a pet would. Save for the lack of a pet bar, of course, but their damage scales based on your level and stats (your gear, basically) and has nothing to do with upgrading them via the table. This is different from when they are escorting you around the garrison. Most of the comments I have seen on the forums are a little iffy on whether or not they scale with player gear, but most guides I have found say that they do, including Wowhead.

I haven’t been able to find a blue response that confirms this, so if anyone has one, please post it in the comments. For now, I’d assume that they scale with your level and gear while they’re bodyguarding for you.

So do we think we’re getting Valor and Justice back in the next expansion? 6.2’s push on Apexis crystals really feels like Blizzard realized the oopsie it made getting rid of those currencies. I certainly miss them as they gave a alternate route to gear when luck or time wasn’t on my side. I’d see Valor as the only currency in 7.1. Once new raid teir drops in 7.x, Justice activates as all the previous Valor stuff if now purchased with JP (like it used to be).

No, I don’t expect Valor or Justice to return. I think it’s likely we’ll keep seeing new, expansion specific currencies in some combination with gold – Blizzard seems to like being able to gate how fast we can acquire upgrades in this fashion.

That’s the Queue for this Friday. If you’re looking for a resto shaman, Puck is retired. Nowadays she’s all about DPS.

Blizzard Watch is made possible by people like you.
Please consider supporting our Patreon!
Filed Under: Blizzard Watch Pets
Advertisement