The Queue: Alternate universes, strange portals, and other Warlordsy topics 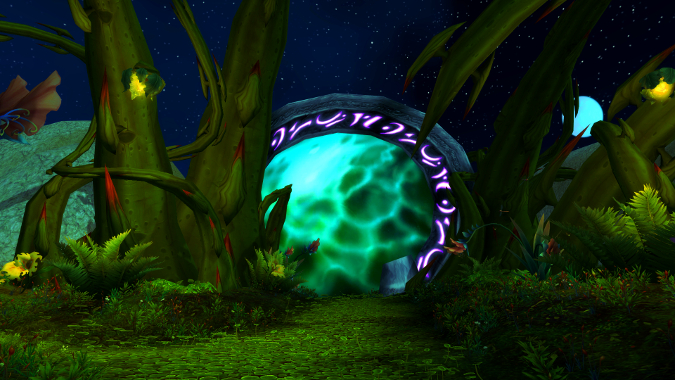 So, I’ve been playing a new Draenei Priest who, in my head canon, is literally the AU version of my Mage. Instead of a girl, her parents had a boy. After going through Talador and seeing the end cinematic, something occurred to me. In ‘that’ moment, Maraad says ‘In the Light, we are one’. Now, this might just be a throwback line to when there was to be a romance between him and Yrel, but what if they actually are one person? What if, in the AU time line, Maraad’s parents had a girl instead of him? That could mean Samaara is Garona’s mom. Thoughts?

The wonderful thing about headcanon is if you can believe it, it’s true. (Well, it isn’t true, but it’s true to you.) Personally, I like the theory that Yrel and Samara are the Sunwell raid’s Eredar Twins in our reality.

If demons don’t really die, does that mean we could possibly see the return of the dreadlords Tichondrius and Mephistroth? If Anatheron is back as Archimonde trash, I’d like to see my server’s namesake return.

Yep! Before it was revealed demons in general were immortal unless killed in the Nether, the nathrezim were already established as immortal — for a long time, we thought only they had that immortality. They’re creepy vampire demons that often suffered setbacks, but always came back before too long. Who knows if we’ll see those specific dreadlords in-game again — but they most likely still exist out there in the Twisting Nether.

I actually quite miss the dreadlords. In Warcraft 3, those guys were the sinister, plotting agents of the Burning Legion. Nowadays, that role tends to get shifted away and the dreadlords are usually trash mobs — or relatively easy raid bosses. Anatheron was the second boss of Hyjal Summit, for example.

As a follow up to today’s question about Kil’rogg, how do you think the Lorda of War cinematics actually fit? The death Maraad shows us Kil’rogg “foresaw” is ALT Kil’rogg’s death. Our Kil’rogg died at the hands of Danath Trollbane. How would he know what ALT-Kil’rogg’s death vision was? That was my biggest problem with using Varian and Maraad as framing devices for those. The line between main U and alt U stories became blurred and have remained blurred ever since.

Unfortunately, as fun as the Lords of War series was, Maraad-as-Narrator was one of its biggest problems. Maraad probably didn’t actually know half of the information he shared. He couldn’t have known Kilrogg’s vision. He probably didn’t know about the lives of most of the warlords. We don’t completely know which of those stories is canon for the alternate universe, our universe, or both. Worse — since Maraad was the narrator and we know he probably doesn’t actually know some of these things, I anticipate people will write some of them off completely as told by a potentially-biased unreliable narrator.

I believe the devs said — at some point — Lords of War should be considered canon in both universes, but Maraad as narrator is still strange and there are some details that don’t feel like they can fit in both scenarios.

Do you personally feel any responsibility to help new players? I got help and advice from a few nice people when I first started out, so I totally do. I need to do more of it actually.

I think I have two different answers to this question. Here on Blizzard Watch, we try very hard to be aware not everyone is a high-end player and create content even newbies can understand. In that sense, I do feel responsibility to help new players! In-game, sometimes it’s different. Sometimes I’ll help, sometimes I just want to be left alone. Sometimes I’ll volunteer answers in chat, sometimes I’ll stay out of it. Usually, when I’m playing WoW, I’ve had a long day and am not particularly in the mood to talk to strangers.

Why are we sent out on our daily apexis objective in Tanaan then sent back out for 2 more bonus objectives after we complete the first quest? It seems odd that we have to go back to camp only to go back out. Why not have the daily quest auto populate while out in the wild?

I found this weird, too. The idea, I think, is they don’t want to see doing extra objectives as mandatory. The first quest — the one from the table — gives the most reputation. If you don’t want to do more than that, that’s fine. If you want to do more, you can go back and get the quest to do just that. That said, this would work better if that second quest didn’t come along with it — the one to get a gronn belt or sacrifical daggers or whatever. That one makes it feel like I haven’t completed a day of quests. That said, I’m okay with doing those extra quests. I enjoy having a few more things to do each day. I’m just not sure they accomplished their goal of making those appear optional. Running back to Lion’s Watch to pick those two quests up simply pulls me out of my kill-everything-in-sight groove.

Did we ever learn what the portal was for in SW up on the hill?

That’s for the Everbloom dungeon! Spoiler alert: at the end of the dungeon, a genosaur uses an open portal to pass through to our Azeroth. We have to stop it before it destroys Stormwind/infects Stormwind with creepy plant-people mind control spores or whatever. (I’ve heard Horde players say they hate the fact that they need to save Stormwind and would rather let the boss destroy it. Yeah, it isn’t like we helped you reclaim Orgrimmar from Garrosh Hellscream or anything. And it isn’t like a mind control fungus would do the Horde any harm, right?)