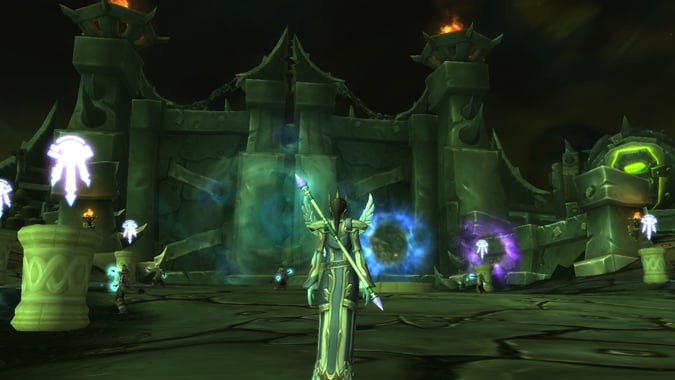 Hellfire Citadel has been out for almost a month, and today we’re going to cover Priest healing tips and tricks for the first two wings: Hellbreach and Halls of Blood.

As far as talents go, I generally run with Words of Mending and Cascade. For Discipline, I take Power Infusion, and as Holy it will vary between Twist of Fate and Divine Insight. Twist of Fate is solid for progression and Divine Insight is useful for burst if needed. The usefulness of Clarity of Will vs. Words of Mending for individual Discipline Priests will vary, depending on how many Holy Paladins are in your raid. If you find yourself the only tank healer, Clarity of Will is the way to go. Any specific talents needed for individual fights will be noted. 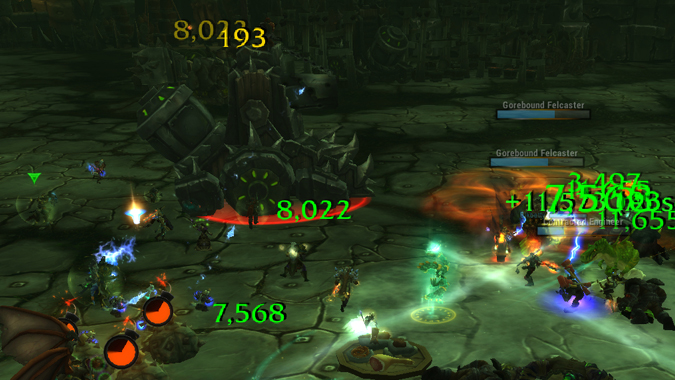 Hellfire Assault is essentially a DPS fight, as it involves managing and killing the adds. There is no “main boss” but rather a series of mobs. Most of the damage here is raid damage from those adds, the severity of which will vary based on how well your DPS handle the fight. Tanks will be taking constant damage from Slam stacks and will need constant healing. The main adds to watch out for are Gorebound Felcasters, who cast Incinerate and Felfire Volley on the raid. At 40% health, they will cast Metamorphosis and turn into Gorebound Terrors, spam casting Felfire Volley repeatedly for a lot of raid damage. Siege tanks will come out and use Belch Flame and Siege Nova on the raid, while players will be picking up Felfire Munitions and running them to the Reinforced Hellfire Door. 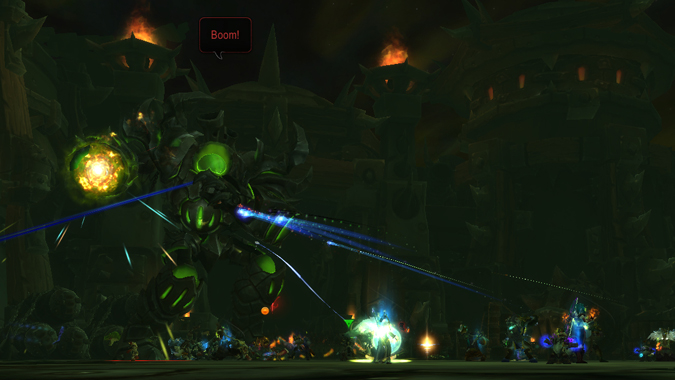 This is a fight with a lot of burst damage — players will be taking damage from Immolation and Unstable Orb. Unstable Orb damages targeted players and anyone around them, while Immolation is a stacking DoT from running through the fire patches on the ground. Tanks alternate with Artillery and running out of the raid. The bulk of raid damage comes from Pounding, which requires alternating healing cooldowns. The Air phase is relatively light on damage, though players need to avoid the Fuel Streaks and subsequent Flash Fires on the ground, and they’ll need to run out of the raid if targeted by Artillery. Volatile Firebombs will drop on the ground and must be killed, or they’ll explode and cause damage to the raid. 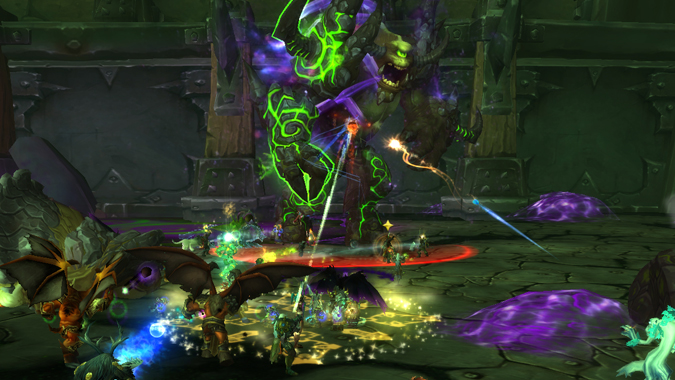 Another fight with burst raid damage. Kormrok has three different abilities based on which pool is active, either normal or empowered. He summons Explosive Runes and Empowered Explosive Runes, which will be stepped on by designated players, who take damage from the runes. Grasping Hands and Dragging Hands work like the hands on Kromog, grabbing players in place and causing damage until they are killed. The third set of abilities, Fel Outpouring and Empowered Fel Outpouring, spread across the room in large globules. Players simply need to step out of the way of these, or they’ll take damage. 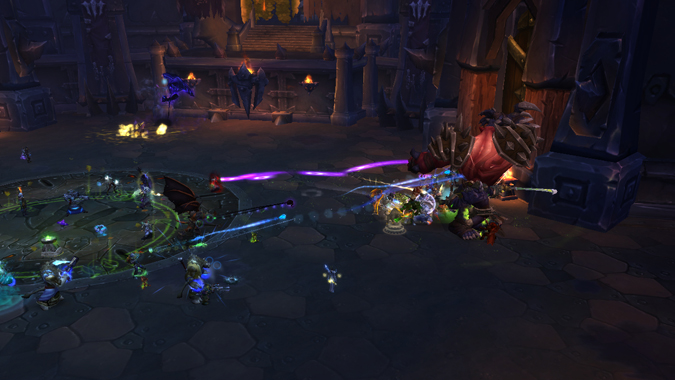 Three council bosses that do not share health and must be killed separately. We’re mostly concerned with a couple abilities. Gurtogg fixates on a player, casting Fel Rage and dealing increased damage. Jubei’thos sends out swords that the raid needs to dodge, as well as raid-wide damage with Fel Storm. What most concerns us is Dia, who places Mark of the Necromancer on random raid members. The DoT increases in damage steadily, apparent by the color of its icon: purple to yellow to red. Dispelling it causes it to jump to two other players, so try to only dispel if it is maxed out at red, or on a tank before Dia casts Reap. When Dia casts Reap, she will wipe the Marks from the raid and drop void zones under those players. At 30%, she stops using Reap and will no longer clear the Marks. Your raid must kill her before being overwhelmed by damage. 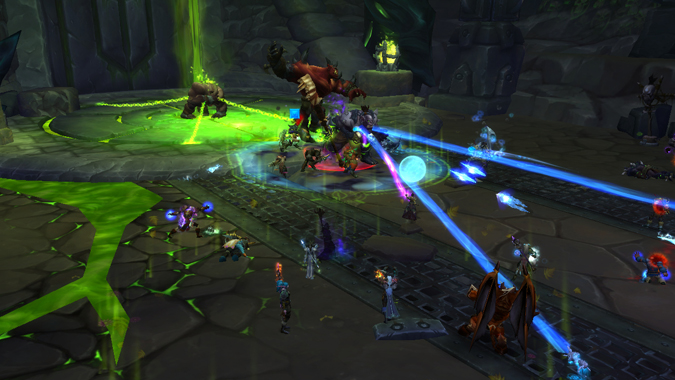 Kilrogg has a couple of main abilities. Heart Seeker targets a random player at range, who must run out of the raid to the back of the room. It’ll damage anyone in line of sight, and a Blood Globule spawns under them at the end of the cast. Heart Seeker leaves a DoT on players that causes a lot of damage until it eventually falls off. Kilrogg also casts Death Throes, and you’ll want to avoid the green swirls on the ground. Melee and tanks will take Fel Corruption from the boss. Three players at a time are chosen to enter Vision of Death, where they battle separate adds. 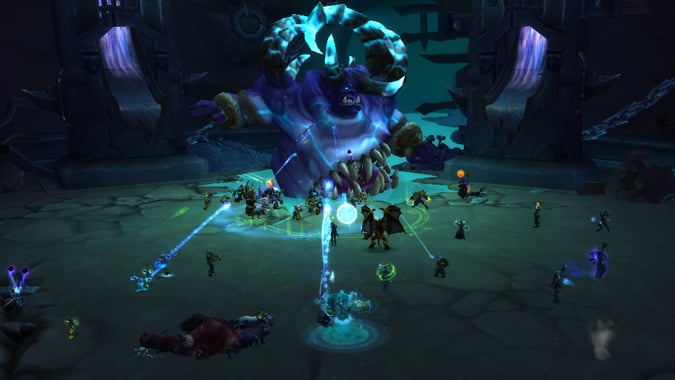 Gorefiend has three different phases, outside the stomach, inside the stomach, and casting Feast of Souls. The raid starts outside, and random members are chosen to go inside of his stomach, where they need to kill or heal the adds. Healing as many Tortured Essences as possible means fewer adds reach the surface and damage the raid — a macro may help target them quickly. If another healer happens to be put into the stomach while you’re in there, leave the stomach and help the raid. Only one needs to be down at a time.