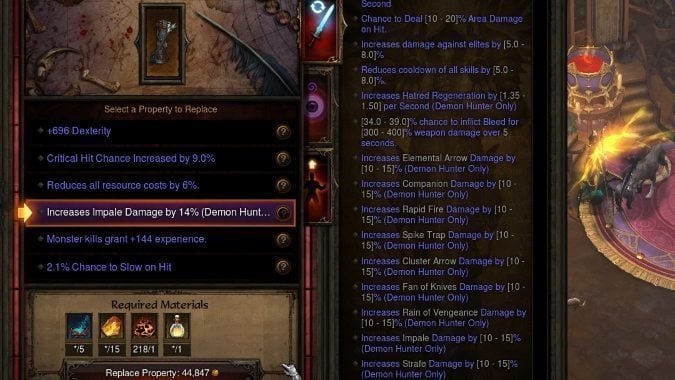 There are three artisans currently in Diablo 3 with a fourth coming in patch 2.3.0. The new patch is bringing some crafting changes with it, like a consolidation of not only materials but also some recipes. Of course, this is the PTR, so things are subject to change, but we can go over the basics of the artisans in Diablo 3. 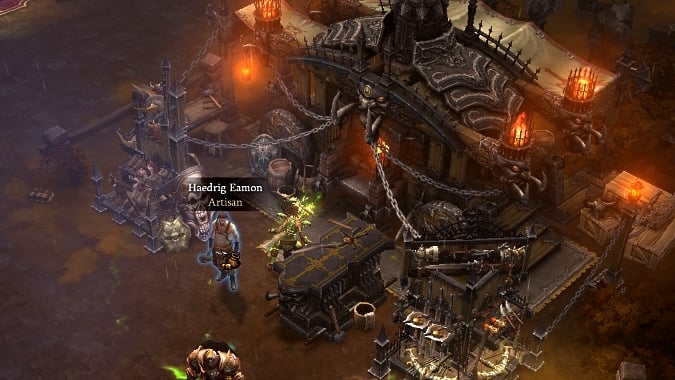 If you are playing Campaign for the very first time, you’ll unlock the Blacksmith first. He has a small quest chain in early Act I where you put his wife’s soul to rest by defeating her zombified mini-boss form. The Blacksmith crafts all your equippable items including follower-specific and class-specific items, except for rings and amulets. He can also repair your equipment as well as salvage items you don’t want for materials.

He has 12 ranks to train up, and will craft you a stronger power level of gear at each new rank. You start with the rank 1 blue or magic quality Apprentice items and work your way up to the rank 12 yellow or rare quality Sovereign items at level 70. The Blacksmith can also craft legendary items after you pick up a dropped legendary pattern in the world and train him by using the pattern when his artisan menu is open.

Of course, this is the PTR so things may change, but it appears that the legendary crafting materials are the same for crafting legendaries in the same slot. That is, crafting level 70 legendary bracers will require the Act II & III materials, whether you’re trying to make Aughild’s Search or Reaper’s Wraps. I’ve started a spreadsheet of material requirements here.

At lower ranks, the Blacksmith will just offer a single salvage button, so you’ll have to click everything, but at maximum rank there are Salvage All buttons for normal (white quality), magic (blue), and rare (yellow) items. You still have to click every legendary (orange) or set piece (green) you wish to salvage, and the game will ask if you really wish to destroy each item. If you salvage an item with a socketed gem, you receive the gem back in your inventory along with the salvage materials.

Typically, items will break down into materials of the same quality: 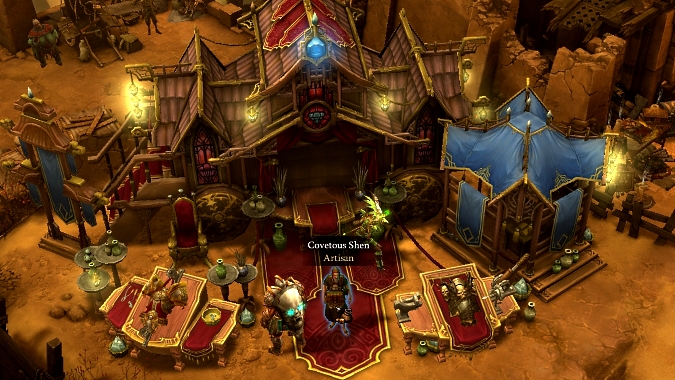 If you are playing Campaign for the very first time, you’ll unlock Covetous Shen in the beginning of Act II, after you find and rescue him from the Caldeum sewers. The Jeweler crafts gems, rings, and amulets. He can also remove socketed gems from items without destroying the item, to contrast from salvaging a gem-socketed item.

Shen has 12 ranks to train up, though you’ll only have 7 gem recipes for each of the five gems when you reach maximum rank 12. You can find two more gem levels through drops at level 70. There are also two types of rings/amulets — Exquisite at level 60 and Sovereign at level 70. You’ll have to buy the patterns for the Hellfire Ring and Amulet from Squirt the Peddler in the Hidden Camp in Act II.

Crafting a ring or amulet doesn’t take the usual crafting materials. Instead, you use Marquise gems. The rings both take one each of Amethyst and Diamond, while the amulets require one each of Ruby, Emerald, and Topaz. To craft a gem, you need 2-3 of the next lesser gem and increasing amounts of gold per gem rank. You will also need one Death’s Breath for every Royal or Flawless Royal gem you wish to craft, which are the level 70 drop recipes (and Death’s Breath is a special level 70 crafting material). Making an Imperial gem jumps up to a 200k gold cost compared to the previous Marquise cost of 25k, but by the time you hit level 70, only Marquise and Imperial gems should be dropping for you from monsters.

You can craft many gems at once by typing in a number next to the craft button or by hitting the right arrow to increment the counter. As gems combine into each other, you can extend the math out to see how many lower gems and gold you’d need to make one higher gem of two or more ranks. 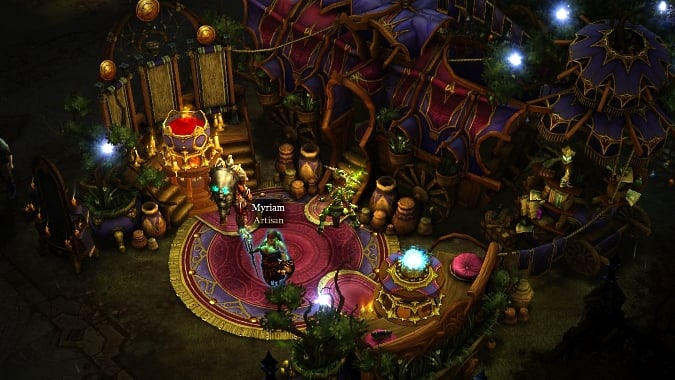 If you are playing Campaign for the very first time, you’ll unlock Myriam in early Act V after rescuing her from and defeating the death maidens in Gideon’s Row.

The Mystic’s main function is to enchant items, which is re-rolling one stat on an item, but she can also transmogrify certain items you wear into similar items. As the Mystic provides two services instead of crafting items, training her up to the maximum rank 12 just expands what she can enchant or transmogrify.

Diablo 3’s transmogrification system has been asked for many times in World of Warcraft because of how it discovers and stores item appearances. In WoW, you have to have the item which appearance you want to use in order to transmogrify in the bags or storage of the particular character you want the appearance on. This results in needing a lot of storage space for items if you want a vast collection of appearances. In Diablo 3, however, you just need to discover a legendary once on any character, and all your other characters on that mode (softcore, hardcore, seasonal, etc.) will be able to use that appearance even if you destroy the item. The randomly named non-legendary items are learned over time as you level and train the Mystic. 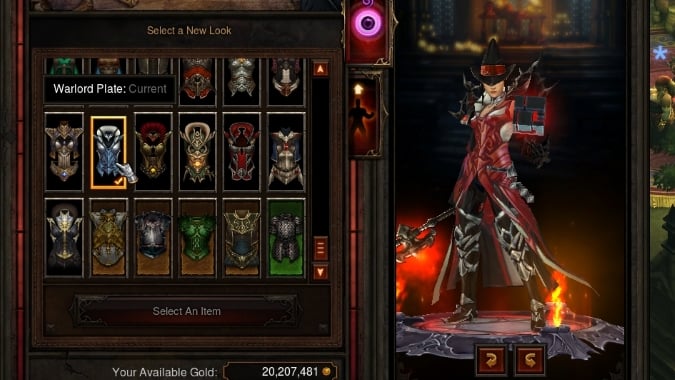 The transmogrification menu comes with a preview pane of your character, complete with 360-degree spinning to see your new look from all around. This is necessary since each class can have a different look for the same item. Armor is straightforward — you can only transmog chest armor into other chest armor, etc. If you don’t see a weapon or off-hand item in the categories below, it can only be transmogged to others of its type (e.g. Wizard sources can only be transmogged to other sources):

To enchant or re-roll a single stat on an item, put an item into the enchant pane. The items’ stats that are able to be rerolled will show up in blue below. The ? button next to each property is important; if you click this, it’ll open a pane that lists all the possible properties this particular stat could roll to. Note that you can’t have duplicate properties this way: for example, if you already have a socket on an item, you can’t re-roll a second stat into another socket. If you have already rerolled a stat on an item, only the rerolled property will show up for re-rolling again. Enchanting legendaries costs Arcane Dust, Veiled Crystals, Forgotten Soul, and Death’s Breath for every re-roll attempt, with legendary rings and amulets adding in an Imperial gem. Lesser quality items may require only Veiled Crystals and Arcane Dust. Zolton Kulle currently offers a quest for the player to go get Kanai’s Cube out of the Ruins of Sescheron in Act III. It doesn’t seem to be linked to Campaign Mode at all, which can make Zolton Kulle’s familiarity with the player feel strange to new players. Kanai’s Cube itself is a feature of the patch and will likely require its own article to cover all of its services as we get closer to patch launch.